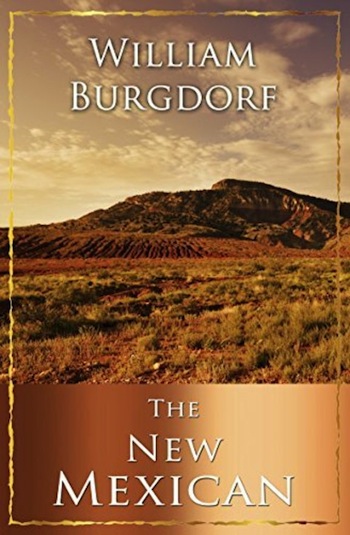 Ahead of him lies deception, heartbreak, ambush, friendship, love, and a resolution at the end of his odyssey that is terrifying.

Zepaniah Bierman, a mustanger turned hunter, lies on the top of the rocky sandy arroyo. Sweat trickles down his face and stains the shirt across his back as the sun beats daggers of heat on the Chihuahuan desert.

Out there is a scout for three riders that torched his ranch in Mesilla. The only way out of this eternal furnace is back to New Mexico; Zep will track them there encountering Mexican cavalry, Apaches, outlaws, and a strong-willed young woman that wait for him.

His trail carries him from Old Mexico to Santa Fe, surviving the Jornada del Muerto, and covering the length of 1858 New Mexico Territory discovering deception, heartbreak, ambush, friendship, love, and a resolution at the end of his odyssey that is terrifying.

Heat waves ripple and shimmer upward from the desert floor in the midday sun. A cactus wren scolds loudly as it darts among the thorns. Alschesay hugs the base of the ocotillo, motionless.

The youth’s obsidian eyes survey the landscape before him, they capture every movement in the desert. Short by Apache standards, Alchesays’s sinewy body and unyielding discipline help him to survive in this harsh land of cactus and rocks. He keeps shoulder-length black hair from his face by a headband. A dark complexion, long breechcloth, and boot-like moccasins all blend into the landscape.

To his left, a Gila monster squirms from beneath a rocky outcropping in the scorching sun, contrary to its nature, and scuttles over to the next rock pile. Its beaded, striped black and orange hide sparkles in the sunlight.

Why does the lizard make a move in the heat of the day? What dislodges it from its slumber? Ground vibrations? Rattlesnake?

He watches as a figure moves out of the foothills, a silhouette rides steadily toward him. He remains immobile; the relentless sun pounds down, it cuts into his back like a dagger’s angry blade. Remaining motionless means life.

Alchesay remembers enduring the “toughening” that prepares Apache youths to become warriors. Rising early, before the morning star, he ran, ran, ran for miles; learned to carry water in his mouth, and then spit the water into a bowl to show none is sipped. He learns to bear the unbearable and be oblivious to pain. In sling battles, struck many times, jagged rocks leave scars on cheek, arms, and chest; he gives as good as he gets. Carefully he listens and learns all the old warriors have to tell, it may save his life someday.

Watching the rider come nearer, he sees it’s a pony soldier wearing a slouch hat pulled low over his brow, a dark blue uniform shirt, and striped trousers encrusted with many miles of dirt. A fold-over flap satchel hangs across his chest. He’s a messenger. His face is covered in dirty thick whiskers, brown touched with gray.

Alchesay glances at a red-tailed hawk circling slowly above him. The raptor’s slow gliding motion on air currents rising from the desert allows this predator to watch for prey. He feels a soulful kinship with the hawk. Any small creature that moves below becomes the bird’s next meal.

Close now, the man dismounts. His tall dirty black boots raise a little dust as he loosens the saddle’s cinch and waters his mount from a canteen using his hat. He takes care of his mount before himself. This land requires it and the land is merciless.

Alchesay wonders. Where is he headed? Who does he think he will find in the desert? Who waits for a message he has to deliver? WHY does he dare to journey alone into Apacheria?

Alchesay sees his uncle, Dehkeya, slowly rise from his hiding place and walk toward the pony soldier. His stride is straight and strong. He moves silently in his boot-like moccasins. A blue cotton shirt is tucked into the belt holding his knife and he carries his rifle. His long breechcloth hangs to his knees, and he wears a headband to hold back his long hair. His face is granite-like, his dark eyes unemotional.

The two men face each other.

One belongs to this land, the other doesn’t.

Alchesay quickly moves closer, like a shadow drifting near to the two men.

Neither the soldier, nor Dehkeya smile. If there is recognition, it speaks in their eyes.

“I’m headed for your village,” the trooper states. “What do you have to say?” Dehkeya asks.

“I carry a message from my General, the one you call Nantan Ba’cho, the Grey Wolf,” says the trooper. “It is not good news.”

“My army is ordered to arrest those involved with raids in the Santa Rita Mountains,” the trooper says as he pushes his hat back on his head.

“You know the mountains are Apache land, the land of our ancestors and any you seek will not be turned over to white men,” Dehkeya says, clenching and unclenching his fist. “You are a very brave or very foolish man to come alone.”

Taking a step back and moving a hand toward the pistol at his side, the pony soldier replies, “I’m not alone, many soldiers up in the mountains are coming fast behind me. Nantan Ba’cho leads them.”

Dehkeya struggles to contain his surprise, and glances toward the mountains for any telltale sign of an army.

The soldier says, “You can come with us peacefully, or we can drag you out.

But, you are coming.”

Alchesay hears the unbelievable. How can this white man insult his uncle, an Apache warrior, in such a manner? The whites have much and want much more, they are never satisfied. They spread like flies over a dead animal.

Jumping up, Alchesay charges the soldier; a bloodcurdling scream leaps from his lips. He yanks a knife from his belt and drives it deep into the soldier’s throat.

The pony soldier grabs his neck; a gurgle escapes from him as he collapses to the ground. Blood pools onto the sand.

A tarantula ambles past and tests the blood with its two front legs.

Alchesay stands frozen, motionless, and watches a man die. He has never taken human life before.

He turns to his uncle for reassurance, “We will never leave this land.” Quietly, Dehkeya, corrects him, “No, we will not leave, but you must.”

“I can not,” Alchesay pleads. “ Today I defended your honor and the honor of

The People, the Apaches. Today I am a warrior.”

“The soldier should not have come alone, he made a forever mistake,” mutters Dehkeya. Looking at Alchesay he says, “Now, you must leave.”

“Take the pony soldier’s horse. Ride south and join The People in the mountains the Mexicans call Sierra Madres.” Dehkeya indicates the direction with his hands.

“Ride hard, when the horse fails, kill it and eat what is necessary to survive.” He takes the soldier’s rifle from the saddle, and pulls the pistol from the dead man’s holster.

“What will you do?” asks Alchesay.

Dekeyah looks at the soldier then towards a distant cloud of rising dust. “I will cover him with stones,” he says, “and pray the Ga’an, our guardian spirits, sweep his blood from the sand.”

The Traveling Photographer: Call of the Mountains by Sharon Feldt