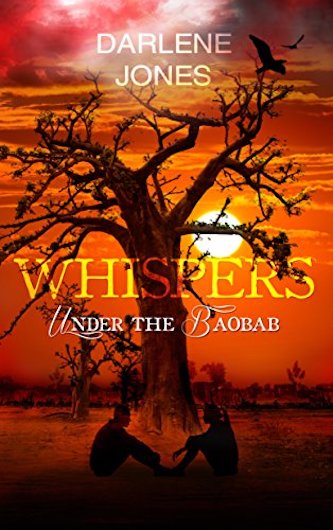 The reporter is dead, but she was with him, and the evidence she left behind could still destroy him.

When rebel leader, Sidu Diagho, learns that reporter Flo Mc Allister has died, he knows that her power to destroy him is still very much alive.

Flo was with him during the coup attempts.

She saw everything, yet has remained silent all these years.

But Sidu could still be tried at The Hague for his crimes with her notes the testimony needed to convict him.

Sidu is not the only one seeking to unravel the truth through Flo’s records. Flo’s son and his wife, and Brit … how much do they know?

Sidu will do what he must to find and destroy the evidence against him.

Sampler: Whispers Under The Baobab

Sidu stood by the bed watching the girl toss and turn and mutter. He’d carried her up from the car and settled her in the guest room. She’d been out for almost three hours and would waken soon. He regretted drugging her. Regretted snatching her. But Flo had befriended her in Happy Hearts. If anyone knew what Flo had written, it had to be this girl. He dropped her bright pink bag, minus the cell, on the bed, and went back to the kitchen.

Josef handed him a tall glass of mango juice. “Was it wise to bring her here?”

Sidu glared. “Of course not, but where else could we have taken her? I don’t want to frighten the girl unnecess—”

“Too late,” Josef muttered under his breath as he turned back to the stove.

“By all the gods, don’t you think I know that? But, what choice did I have?”

“You could have tried talking to her.”

Sidu waved his hook in the air. “Approached her with this? For sure, she would have stopped to talk.” He snorted, slammed his glass on the counter, and stormed out.

Striding down the sidewalk, Sidu muttered to himself. He didn’t notice other pedestrians looking at him sideways and detouring around him. “What the fuck have I done? Snatching the girl—a child. What must her mother be thinking? Feeling? My mother would have been devastated if someone took Bintou. Puts me right up there along with Boko Harem. Ah, shit, no. I’m not that despicable. I’m not going to hurt her. I just need to talk to her. But, Josef is right. I could have found another way. Now I have more to atone for. Will it ever stop?”

When he finally made it home, Sidu slunk into the house in an attempt to avoid Josef. A long cold shower later, his temper cooled to a simmer, he found the girl standing before the windows of the living room. He cleared his throat. She spun to face him, trembling and clutching her bag to her chest as if to shield herself from him.

Brit stiffened, staring at him, eyes wide. “Relax! Relax? You grab me and shove me in a car and take me away and I’m supposed to relax? And, what did you do to make me pass out, huh?”

Sidu stifled a grin. So, the girl had spunk. Of course she did. Anyone who’d crawl into Flo’s room via the window had to have courage. Anyone who’d stick with Flo had to have determination. He found himself liking this girl more and more. “That’s quite the temper you’ve got.”

Brit clamped her hand over her mouth. Oh, God. Did I really just talk back? What was I thinking?

Something that could have been the beginnings of a smile played at the man’s lips. “You could have fooled me.”

For some reason, Brit felt herself relaxing—a little. She wasn’t hurt or tied up and she wasn’t in some dark, creepy cellar like a kidnap victim in the movies, and the guy wasn’t threatening her or holding a knife or anything. But, damn-it, he had kidnapped her. Why? What did he want from her?

The man facing her was intimidating and yet…. She studied him trying not to stare. Sharp features, a weathered face, wrinkles that spoke of a harsh life. She wondered if he had any laughter in him, but he had teased her. Sort of.

“What are you looking at?” His voice had a gravelly quality but wasn’t especially menacing.

His eyebrows rose. “Indeed? And you’ve come to that conclusion because…?”

“I don’t know exactly, but you’re sort of like the students on campus from Ghana and Nigeria. It’s something about how you hold yourself and you’re not black the same way Americans are black, and you have a bit of an accent.”

This time he did smile showing beautiful white teeth.

Brit’s instinct was to smile back. Oh, God, don’t be stupid. Stay angry. “You drugged me, didn’t you? Why?”

Please click HERE to find Whispers Under The Baobab on Amazon.