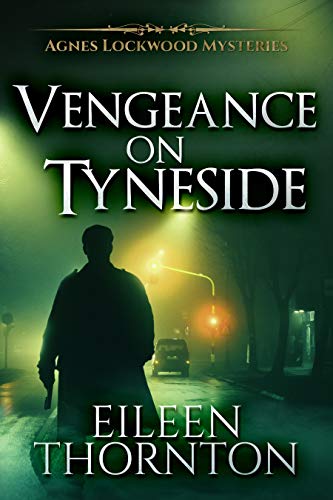 It makes you wonder if Newcastle is the murder capital of England. It seems wherever Agnes goes the Grim Reaper is never far behind her.

After a trip to the coast, Agnes Lockwood is shocked when she finds a young woman tucked away behind the litter bins in Newcastle Central Station.

They soon learn that this is only the first case of its kind, when another stabbing takes place on the Newcastle quayside.

Naturally, Agnes is keen to help with the investigation.

Agnes Lockwood was in a good mood when she stepped off the train at Newcastle Central Station. She had spent the most delightful day at the coast, recalling the wonderful times she had spent there as a child, before her father had whisked his family abroad when he had been promoted to a new post. Now, all she wanted to do was get back to the hotel and relax in a warm bath and get dressed, before Alan – Detective Chief Inspector Alan Johnson, to give him his full title – picked her up for a dinner engagement.

Though her mind was still dwelling on the evening ahead, as she sauntered towards the station exit, she felt sure she heard a faint cry for help. She stopped and glanced around, but couldn’t see anyone in any sort of distress. On the contrary, everyone seemed in good spirits; intent on getting to wherever it was they were going. However, as she continued towards the exit, where she hoped she would find a taxi, she heard the cry again, though it sounded weaker this time.

Perhaps she was allowing her over-active mind to take control. She had done that twice before in recent months and both times it had almost taken her to the point of being murdered. Maybe this time she should walk away. But when she heard the cry again, she knew she couldn’t do that. Someone needed help. Looking around, she realised the sound had come from the row of rubbish bins lined up by a wall, not too far from where she was standing.

Agnes braced herself as she walked towards the bins. It could be that when she got there she would find nothing to worry about. Yet, at the same time, from past experience, she was well aware that she might find something horrifying.

Now, having reached the rubbish bins, she took a deep breath before peering behind them. For a moment, despite having prepared herself for the worst, Agnes was still stunned at the sight of a young woman lying there, her hands clutched to her chest, desperately trying to stem the flow of blood that was streaming from her body and pooling on the concrete ground beneath her. Her blue eyes, wide open, were filled with terror. There were streaks of blood on her face and hair, probably from trying to brush her hair away from her eyes. One of her shoes was missing.

Lying to one side of her was a knife – but not the sort you might expect to find at the scene of a stabbing. This one looked like a penknife, though, admittedly, the blade was a little longer than any Agnes had ever seen before. Yet it still appeared to be a knife that could be folded and placed out of sight in someone’s pocket.

For a moment, Agnes stood looking down at the woman, too shocked to move. Not only because of the sheer horror of the situation, but also for another reason. She recognized this woman. She had seen her earlier in the day.

This was the woman in the red dress.

With the weather being so hot in the city, Agnes had decided to take a trip to the coast. It was likely to be much cooler there due to the breeze rolling in from the tide. She had been planning to visit the coastal area for some time, but for some reason, she hadn’t yet got around to it.

Her first stopping off point had been Tynemouth. There, she had visited the remains of the Priory, which stood on the headland looking out over the North Sea. Then she had wandered along the coastline towards Cullercoats, a small village once known for its fishing community. How sad it was that the row of small white cottages facing the sea had disappeared.

Tracing her mind back down the years, she recalled the cottages had been occupied by local fishermen and their families. Usually, fish caught earlier in the day had been placed on tables set up outside the front doors of the cottages, waiting to be sold. Agnes reconciled herself with the knowledge that everything changed over the years. Nothing ever stayed the same.

Continuing on her walk, she finally reached Whitley Bay, another well-known holiday resort, only a mere ten miles from the city of Newcastle. She recalled how the beach used to be flooded with holidaymakers as far as the eye could see. Hired deck chairs and small tents, used for changing in and out of bathing costumes, had filled the scene.

Please click HERE to find Vengeance On Tyneside on Amazon.