Sampler: Under the Nazi Heel by Scott Bury 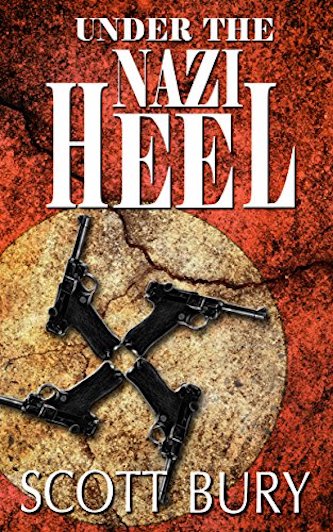 Experience this seldom seen phase of World War 2 through the eyes of a man who fought and survived Under the Nazi Heel.

For Ukrainians in 1942, the occupying Germans were not the only enemy.

Maurice Bury was drafted into the Red Army just in time to be thrown against the invading Germans in 1941. Captured and starved in a POW camp, he escaped and made his way home to western Ukraine, where the Nazi occupiers pursued a policy of starving the locals to make more “living space” for Germans.

To protect his family, Maurice joins the secret resistance. He soon finds the Germans are not the only enemy. Maurice and his men are up against Soviet spies, the Polish Home Army, and enemies even closer to home.

Experience this seldom seen phase of World War 2 through the eyes of a man who fought and survived Under the Nazi Heel.

Sampler: Under the Nazi Heel: Walking Out of War, Book 2

The first wagon was beside the door, its horse moving nervously, trying to push its way back. The young boy driving it no longer held the bridle, but stood still, eyes wide. “Quiet that horse,” Maurice ordered. “Load as many bags and barrels as you can. Hurry.”

Kuchnir and Marchuk pulled Hammer’s body into the back of the wagon. Maurice and Spike loaded sacks of flour beside him. “Go on, get that out of here, and make room for the next wagon.”

The boy led the horse around the barn, back to the opening in the fence as the other teenager led the next wagon over. Everyone pitched in, loading barrels and sacks. Minutes felt like hours, like days as Maurice kept looking toward the garrison.

Sweat stung his eyes and made his shirt cling to his skin.

With the second wagon full, Maurice slapped the horse’s rump, sending it around the barn like the first. Yulia led the third wagon, and the men had only loaded one sack onto the back when they heard the tailor’s voice. “Get out! Fritz is coming.” Maurice looked up as the tailor melted into the shadows. He heard pounding footsteps and saw shadowy figures running from the garrison, a hundred meters away.

From his left, he heard the tailor’s shotgun fire, and one of the shadowy figures fell. The gun roared again, and Maurice could see a German soldier get down on one knee to aim at the tailor.

Kuchnir fired at the guard, and Maurice fired his own pistol. Two more Germans fell, but in the dark, no one could see how many were left. They could hear more running footsteps from the garrison and shouts in German.

Maurice threw the gate open. “Go! Get out of here!” Yulia climbed into the seat behind the horse. Maurice heard the reins slapping the horse’s back at the same moment he heard another rifle shot. Yulia’s head jerked back and she fell into the bed of the wagon. “Shit!” Maurice swore and jumped into the wagon, firing his Luger at the Germans he could not quite see.

The tailor’s shotgun spoke one last time, and then the horse neighed and charged through the gate, nearly tipping the wagon over. Maurice pulled it to the right as Kuchnir and Marchuk jumped on. Marchuk had a huge revolver and fired again and again. Kuchnir tried to aim his rifle but fell into the back. A bullet smacked into the side of the wagon and the horse ran even faster. They rattled over the railroad tracks. Marchuk, sitting beside Maurice, had to hold his fire for fear of hitting Kuchnir, who managed to crouch down in the wagon bed with his rifle barrel resting on the side, and fired toward the German guards behind them. Maurice pulled hard on the reins, turning the horse toward the forest and escape. The horse jumped over the railway track and the wagon followed, tipping to the right. Maurice slammed into Marchuk, who dropped his revolver but managed to grab onto the wagon and stay aboard.

Then they were under the trees, in the protecting shadows of the forest. Maurice gave up trying to steer, trusting the horse to follow a path, any path away from the Germans. He bit his tongue as the wagon shook over ruts and bumps.

“Maurice,” Kuchnir called. “She’s not dead. She’s wounded in the head, but she’s still breathing.” Maurice looked down, but he could barely see the outline of the girl’s body, sprawled on top of bags of flour.

Please click HERE to find Under the Nazi Heel on Amazon.