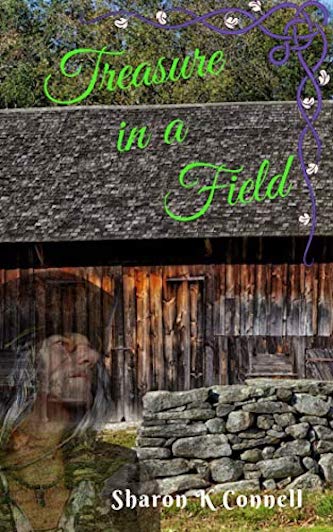 Did the Indians want their land back? Were the legends real? Or were they just good fireside stories her dad used to tell?

Who is responsible for all the strange events happening on the MacKennas’ 1800s ancestral farm outside North Bend, Nebraska?

Could someone have caused the deaths of Haley’s parents? Does the legend of the MacKenna family treasure have anything to do with these events?

Haley’s life is complicated by the man whom she’s known all her life. Her brother’s best friend. A grudge against him for something he did in high school has been festering for too long.

Can she forgive him?

Attention from the new man in town stirs the pot.

She wonders if either of them could be responsible for the trouble on the farm.

And what about their trusted farmhand, Drago?

He’s convinced ghosts from an Indian burial mound that allegedly filled the field behind the farmhouse are to blame.

Did the Indians want their land back?

Were the legends real?

Or were they just good fireside stories her dad used to tell?

Sampler: Treasure in a Field

The University of Colorado – Boulder

Haley MacKenna sat on her dorm room bed, head propped in one cupped hand with her elbow on her knee, focused on the notepad. She brushed a lock of shoulder-length red hair away from her eyes. What had she written during the afternoon lecture? She shook her head in disgust. “Chicken scratches. I can’t stand it when my scribbles come out worse than a doctor’s signature.”

Pointing to the middle of the page, she held the spiral pad out toward her roommate, who sat at a desk against the wall. “This word. I can’t figure it out. Did Professor Duncan mention something about a treasure in that lecture? Here. See if you can read it.” Haley tossed the pad onto Kayla Ross’s lap.

Kayla laughed and examined the paper, then glided to Haley’s bed. “You have the worst handwriting I’ve ever seen, girl.” She squinted at the page. “I think…I don’t know…but I think it says treasure.” She flipped the pad onto the comforter in front of Haley and sauntered back to her chair.

“Yes, siree. Don’t you remember? He talked of nothing but gold and jewels for a few minutes when he went off on a rabbit trail again, just as he usually does. He gave details of his vacation last year when he and his wife had gone to Florida to see if they could find buried treasure on the beach after he’d read of interesting discoveries. But why notate that?” She resumed reading her geological engineering book.

A moment later, while Haley scratched out the undecipherable note from the paper, Kayla shut her textbook and turned back to Haley. “Professor Duncan carried on and on about the gold coins. I thought it would pique your interest after the story you told me our first year here. The MacKenna legend. Do you plan on a trip to Florida to hunt for gold yourself?”

Haley glanced up at her and sighed. “Must have zoned out after I wrote this word. For most of my life, I’ve been spoon-fed that old family myth. To be honest, if I never hear another story with a connection to treasure, Spanish galleons, or pirates, I’ll be a happy camper.”

She jumped at the loud knock on their door. Her hand flew to her chest. Rapid taps followed. “What on earth?”

Kayla ran to the door and peered into the hallway through the peephole. “Haley, I think it’s your brother.” She turned with her brows furrowed, pointed to the picture on Haley’s nightstand, and shrugged. “Doesn’t he live in California?”

As Haley leaped out of her chair, the door swung open. “Hi, big brother. What brings you to—”

Aiden wrapped his strong arms around her in a tight hug. “Sis, I have bad news.”

When a hand touched her shoulder, Haley jerked awake. The dim light from the bathroom showed Kayla bending over her.

“Haley, it’s midnight. Your brother has everything in the car ready to go. I threw a few goodies from our stash into your tote for you to munch on during the flight if you get hungry.” She turned on the nightstand light and held out the bag.

Haley’s purse and computer sat on the card table next to the door. She smiled at her roommate. “You’re one of the best friends I’ve ever had.”

Kayla plopped down on the bed and hugged her. “And you mine. I’ll miss you while you’re gone, girl. Text me when you get there, okay?”

“I will. Wish you were going with us, but you need to stay in class with the load you’re taking this last year. When I get back, I’ll have to pick your brain on our joint classes to catch up. If only all our classes had been together.” Haley rose and finger-brushed her hair.

Kayla ruffled Haley’s hair back up. “With your smarts, it’ll be a piece of cake for you to catch up. You should check to see if you can get any work done online while you’re gone. Just in case you don’t get back right away.” She hugged Haley and walked with her out the door. “Look, don’t let this get to you. Remember, I’m here if you want to talk. I’ll be praying for you.”

Haley forced a smile. “Right. I’ll text you later in the morning. You take care of yourself, Kayla. And don’t worry about me. I’ll be fine.”

Then why do I feel things will never be the same again?

Please click HERE to find Treasure in a Field on Amazon.