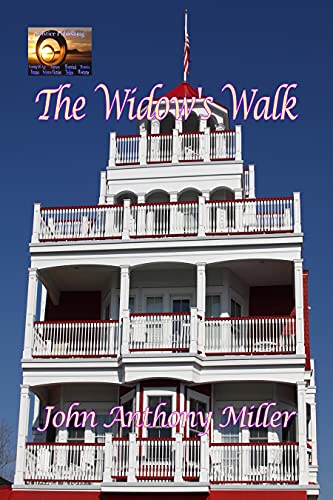 When she inherits a run-down Victorian mansion in a decaying New Jersey beach town, it only seems to get worse until she finds the treasure map.

When NYC editor Audrey Taylor finalizes her divorce, it seems as if her entire world has collapsed around her.

And when she inherits a run-down Victorian mansion in a decaying New Jersey beach town, it only seems to get worse. At least, until she finds the treasure map.

The Widow’s Walk is a tale of growth, self-discovery, and learning to appreciate all the good that life has to offer.

A romance wrapped in a historical subplot, a mystery hidden in a centuries-old crime, it ties two unsuspecting people together to find a love that neither expected—which is far more precious than buried treasure could ever be.

The eighth-floor office faced East 50th St., cars crawling on the street below, weak sunlight shimmering off glass windows on the skyscraper across the street. Audrey Taylor glanced around the office, recently cleaned, photographs of the New York City skyline on the walls that she had barely looked at in the eleven years she had used the room. She picked up the last of her belongings, a family photograph—herself and her husband with their two daughters—from a family reunion a few years before. They all looked so happy, eyes twinkling, smiles broad, their arms around each other. When had it all gone wrong?

It was over now, final and finished. And what was once a family had quickly become only Audrey, shattered and alone. Her daughters, Linda and Barbara, were at college in Syracuse, and the divorce papers had been signed. She tucked the photograph into the carboard box that sat on the desk, next to a cactus. She had bought the plant because it rarely needed to be watered, a task she didn’t have time for and rarely remembered.

But she was still very fortunate, even though the last year hadn’t turned out quite like she thought it would. She was an editor for one of the largest publishing companies in the world, a corporation willing to bend and accommodate, yield when needed, and give her the opportunity to pursue one of the craziest ideas that had ever crossed her mind. It was something she never would have considered a year ago, an opportunity she would have laughed about two years before, but something that seemed worth pursuing when she needed a passion to reignite a flame that had suddenly been extinguished.

She looked out the window, snow flurries dancing across the sky, melting when they kissed the pavement and asphalt below. It was already cold, colder than normal, and she was afraid another nasty winter was on its way, painting the landscape in somber shades of gray. She used to hate winter, but the older she got the more she liked it, the opposite of most she knew. It was cleansing, the cold, chasing away leaves that fell from the few trees that poked through concrete on East 50th St.

There was a light tap on the jamb of her opened door.

“Can I come in?” asked Jean Baldwin, her personal assistant. A woman past sixty, she was incredibly efficient, gray hair neatly pinned in a bun, her steel eyes capturing the room, its inhabitant, and sensing the mood the person possessed.

There was a sadness clinging to the office, not wanting to let her go, as if the room itself recognized that a new day was about to dawn, maybe not as sweet as those before it.

“Are you sure you want to do this?” Jean asked.

Audrey hesitated, but only for a moment, before nodding. “Yes,” she said. “I have to. I need a change.”

“Lots of people need changes,” Jean said. She leaned toward Audrey. “But this is pretty drastic.”

Audrey sighed, moving her long, straight, wheat-colored hair from her face. “Divorce is a new beginning,” she said softly. “Whether I wanted it or not.”

“A new beginning for most is a change of address. Not a new life. You’re doing both.”

Please click HERE to find The Widow’s Walk on Amazon.