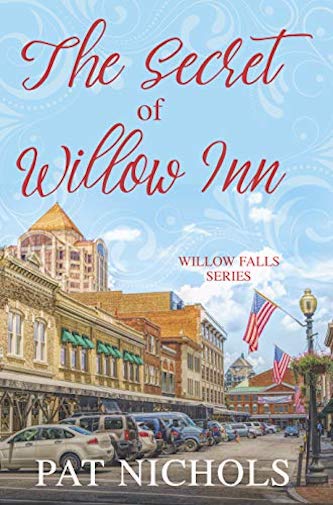 Experience the power of forgiveness, sacrifice, and redemption as the quirky, opinionated residents of Willow Falls are forced to face the past and accept the truth.

Emily Hayes, an aspiring novelist, desperate to transform her dying hometown into a tourist destination. Rachel Streetman, raised in Atlanta, relegates her acting dream to secret performances for imaginary audiences to live the life her father chose. Sadie Liles grapples to find a new normal after serving a thirty-year prison sentence for killing the town hero.

By tragedy, a long-held secret, and one man’s mission to plant a vineyard.

The power of forgiveness, sacrifice, and redemption as Emily, Rachel, Sadie, and Willow Falls’ quirky, opinionated residents are forced to face the past and accept the truth.

That leaves readers yearning to stay connected with characters who have become friends in a town that captures their imagination.

Sampler: The Secret of Willow Inn

As far back as Emily Hayes could remember, her heart yearned for a sister. She directed her earliest requests to Santa Claus, which made Christmas mornings a confusing blend of excitement and disenchantment. Later, she bargained with God. He disappointed her too. When she learned where babies came from, she petitioned her mom with promises to keep her room clean and be the best sister in the whole wide world. Nothing worked. At some point, the pleas stopped, but the lingering desire left a hole in her heart.

Thursday morning, Emily stepped outside the white-columned home converted to a hospital and traced her ultrasound image with her finger. It wasn’t at all what she’d expected. She pressed her hand to her chest to ease the fluttering sensation, slipped the photo in her jeans pocket, and texted her husband. Have results. Meet me in the park in five.

A cool breeze nipped her cheeks and rustled the new crop of leaves on the mature willow oaks lining Main Street. She dropped her phone in her purse, pulled her sweater tight, and crossed the two-lane road to the sidewalk fronting a grand estate. White columns extending from a railing supported the roof over the wide, front porch. The home was weeks away from the final transformation to the Willow Inn, thanks to her parents’ first effort to save their town from a slow, painful death.

The second stood next door—an abandoned, four-story, brick hotel. All they needed to bring it to life was a boatload of money. If everything fell into place, their ship would come before they returned home. A bird fluttering to a nest in a tangle of ivy summoned images of new beginnings and eased Emily’s tense shoulders.

She wandered past the hotel to the adjacent lakeside park and settled on the foot-high retaining wall at the water’s edge. She gazed across the street at the picturesque, century-old Main Street storefronts. Pepper’s Café’s faded awning flapped in the breeze and triggered memories from her childhood. Picnics in the park with her friends. Hiking with her dad to the waterfall. Begging her mom for a sister.

From the corner of her eye, she spotted Scott exiting his store and heading her direction. He sat beside her and kissed her cheek. “How’d your appointment go?”

“When I was a little girl, Mom brought me to town so I could put my letters to Santa in that red box.” Emily pointed to the vintage, cast-iron mailbox on the corner. “Afterward, she’d treat us to dessert at Patsy’s. It’s a miracle her store and the café are still open.”

“At least for now. Enough about Willow Falls’ problems. What’d you find out?”

She handed over the ultrasound photo.

As he studied the image, his brow furrowed. “Tell me what in the heck I’m looking at.”

“Answers to all my pleas and prayers for a sister skipped me and went straight to our babies.”

His eyes opened wide. “Are you saying—”

Scott pivoted and propped a knee on the wall. “Are you sure?”

Please click HERE to find The Secret of Willow Inn on Amazon.