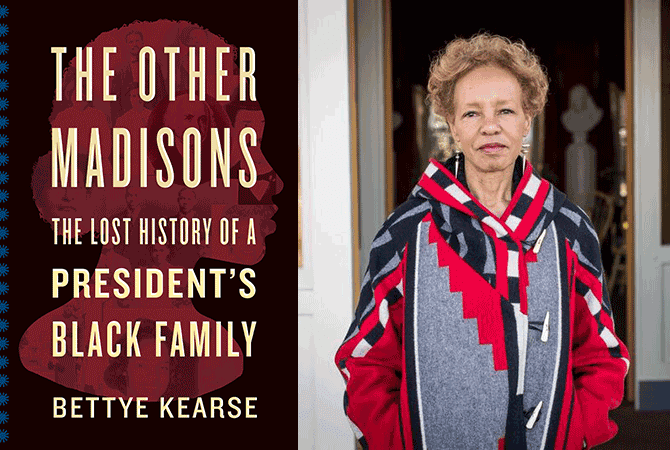 A compelling saga that gives a voice to those that history tried to erase…Poignant and eye-opening, this is a must-read.

In The Other Madisons, Bettye Kearse—a descendant of an enslaved cook and, according to oral tradition, President James Madison—shares her family story and explores the issues of legacy, race, and the powerful consequences of telling the whole truth.

For thousands of years, West African griots (men) and griottes (women) have recited the stories of their people. Without this tradition, Bettye Kearse would not have known that she is a descendant of President James Madison and his slave, and half-sister, Coreen.

In 1990, Bettye became the eighth-generation griotte for her family. Their credo—“Always remember—you’re a Madison. You come from African slaves and a president”—was intended to be a source of pride, but for her, it echoed with abuses of slavery, including rape and incest.

Confronting those abuses, Bettye embarked on a journey of discovery—of her ancestors, the nation, and herself. She learned that wherever African slaves walked, recorded history silenced their voices and buried their footsteps: beside a slave-holding fortress in Ghana; below a federal building in New York City; and under a brick walkway at James Madison’s Virginia plantation. When Bettye tried to confirm the information her ancestors had passed down, she encountered obstacles at every turn.

Part personal quest, part testimony, part historical correction, The Other Madisons is the saga of an extraordinary American family told by a griotte in search of the whole story.

Sampler: The Other Madisons

President Madison did not have children with his wife, Dolley. Leading scholars believe he was either impotent, infertile, or both. But the oral history of my family says that James Madison, a Founding Father of our nation, was also a Founding Father of my African-American family.

According to the history told by eight generations of my family’s griots and griottes, Madison had a relationship with one of his slaves, Coreen. That relationship resulted in the birth of a son, Jim, who, when he was in his teenage years, was sold and sent away. Jim was my great-great-great-grandfather.

My earliest recollection of hearing this story was as a five-year-old girl, trying to stand still while my mother made dresses for me. Every time I had a piano recital, she sewed a new dress, and every time she sewed for me, I became bored and fidgety. I dreaded the fittings more than the performance itself. The performance lasted little more than two minutes; the fittings took at least two weeks. Mom pinned a seam, I tried on the dress; Mom sewed a seam, I tried on the dress; Mom pinned a hem, I tried on the dress… It was torture. My mother designed my outfits, but I did not care about ruffles, lace, and satin trim, and I did not want to play the piano.  I wanted to dance. The closer the dress came to its final shape the closer I came to driving my mother to her wit’s end. At every opportunity, I’d slip away and dance to the music in my head. I loved the Nutcracker Suite. I was the sugar plum fairy.  I arabesqued, twirled, and plied then twirled again, careful not to let the pins stick me. But my reprieves were brief.

“Dolly, come back,” Mom would call. “I have the box out. I’ll tell you your favorite family stories.” And if that did not stop my whining and squirming, Mom would throw up her hands and say, “Please, Bettye, why do I have to keep reminding you? Always remember: You’re a Madison. You come from African slaves and a president.”

This credo has never been for me alone. It has guided my family for nine generations and has evolved to meet the demands of America’s changing times. In the antebellum years, Madison’s name was a tool my enslaved ancestors hoped could help them find each other if any of them were sold and sent away. During Reconstruction, the credo inspired my ancestors to make the most of their lives, now that they were free. And since the Jim Crow era, it has reminded us that our enslaved ancestors were strong, remarkable people.

When I was a child, I thought the credo was merely Mom’s way of telling me to behave myself. In part, it was. She employed the credo to set the standard for my behavior for many of my childhood moments, good and bad. As I grew into adulthood, she taught me to incorporate it as the standard for how I should live my life. It should reflect both my presidential ancestry and my pride in knowing that the blood of slaves runs through my veins.

But it took time for me to learn how to live up to my legacy and to figure out what it meant to me. I am seven years older than my brother, Clay Morgan Wilson IV, nicknamed Biff. Because of the difference in our ages, our parents often joked that they were trying to survive the challenge of raising not one “only child,” but two. Our parents, Dr. Clay Morgan Wilson III and Ruby Laura Madison Wilson, enrolled us in good public schools, paid for music lessons—and dance classes for me— took us to cultural events and church, sent us to summer camps, taught us how we should behave. In this cosseted life, the only demand on us was to do our best at all times. We didn’t have to be the best; we only had to do our best, and my mother would take me aside and say, “All you have to do is to be sweet and smart.” I didn’t understand what being sweet had to do with being smart, and I didn’t understand why my brother was told only to be smart. I was her sweet doll for whom she made fancy, one-of-a-kind dresses, and she called me “Dolly.”