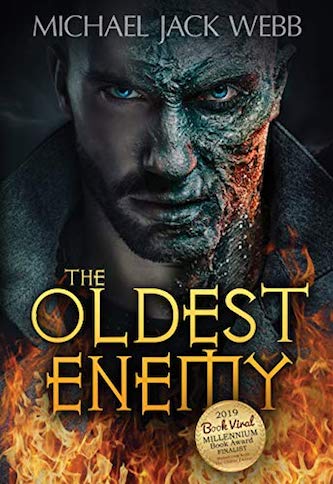 David faces Hell itself to prove his innocence and stop a reclusive German billionaire from unleashing a worldwide holocaust.

David Lighthouse was once a hard-hitting investigative reporter for the Denver Post – before he was accused of the brutal murder of his fiancée and his life unraveled.

Now, six years later, he’s once again the prime suspect in the murder of someone close to him. Beth Barkley’s body has been drained of all its blood, and there are two strange marks on her neck.

David fights to clear his name even as disturbing clues at the crime scene reveal a haunting connection to his fiancée’s unsolved murder and estranged father’s secret past.

Drawn into a supernatural battle that has waged for centuries, David suddenly finds himself the target of sinister forces as he tracks down a conspiracy to release an ancient evil upon an unsuspecting world.

Along with his father, the murdered girl’s sister, and a fierce Auschwitz survivor, David faces Hell itself to prove his innocence and stop a reclusive German billionaire from unleashing a worldwide holocaust.

“Your name! Tell me your name!”

Father Michael Lighthouse’s hoarse voice betrayed his exhaustion and his pent-up frustration, a potentially disastrous mistake. He swallowed several times, but his mouth was as dry as the Sahara and lent nothing to soothe his raw throat. The bound man lying before him writhed in agony as thin streams of grey-white mucous leeched from his flared nostrils, and bubbles of pink saliva dribbled from his contorted mouth.

A thick layer of fear wrapped itself around the young priest as the room grew colder and darker. His breath puffed white before his face. The administrator had cut off the heat in this room two days ago, but this cold wasn’t natural. Father Michael drew his heavy cassock tighter over his lean frame and shivered. Over the cassock, he wore a waist-length white surplice. A narrow purple stole hung loosely from his neck.

He was on the second floor of the city’s largest hospital, located across from Wettiner Station, in the Friedrichstadt.Behind the hospital, in the direction of the river, were the stadiums where he had played soccer in his younger, happier days. Beyond the stadiums, at the edge of the Grosses Ostragehege, a large area of wild, undeveloped land, was the Public Slaughterhouse where the prisoners of war were housed. The SS barracks were located further north and west, in the direction of Heller, on the outskirts of Neustadt. To the immediate west of Wettiner Station was the Hofkirche, where his small office was located, and beyond that was his beloved Opera. He wished he were there now, listening to Wagner.

He frowned, refocusing as pressure began to build around and in him.

Father Werner, the Jesuit priest from Hamburg with whom he’d consulted, had warned him about this moment. “If you get that far—and many don’t—you must press on relentlessly,” the aging Jesuit had said during a static-filled phone conversation. “You gain the advantage by forcing as complete an identification as possible. Succeed, and you will have assured the domination of your will over your adversary.”

“And if I fail?” he’d asked. “Remember, my son,” the older man said, “the evil spirit you are about to engage has found a consenting host. It will not depart without a fight. It will claw at you, deceive you—even risk killing its host. Once cornered and exposed, the spirit will attempt to lure you into a field of battle filled with tempting traps. Do not think for a moment you can circumvent them with your own intellect or logic. Rely upon our Lord and Savior, and you will not fail.”

The conversation died in his head, and Father Michael grimaced. Part of him was repulsed by the man before him—who he was and what he represented—yet the priest in him had compassion for the young man’s torment. No one, no matter how evil, deserved what this man was going through.

The young patient with striking blond hair and pale-white skin was skeletally thin as if he were being consumed from the inside by some sort of ravaging disease. His face was gaunt, and there were dark circles under his blue eyes. When the two Waffen officers now stationed outside the room had brought him in, he had worn the rumpled uniform of the dreaded Schutz-Staffel, the SS. Now what was left of his shirt hung in tatters, exposing his hairless chest.

Father Michael rubbed his eyes then glanced at the small table next to the bed. Between two burning candles, the only light in the room lay a crucifix, a vial of holy water, now half empty, and his prayer book. He moved closer to the bed and table. He should have been accompanied by at least one assistant. Father Werner told him three was the usual number. And he was only half the age of the typical exorcist. By all rights, he should have been the assistant, not the one conducting the exorcism.

The flickering candlelight danced across the frost-covered, chipped concrete walls and cast wraithlike shadows. For a moment, in his mind’s eye, he thought he could see the city in the midst of the flames.

His heart constricted. His beloved Opera must not be destroyed. That would be unthinkable. Yet wails of people engulfed in flames tormented his ears. He blinked several times and shook his head, then wiped stinging sweat from his eyes. . . .

Please click HERE to find The Oldest Enemy on Amazon.