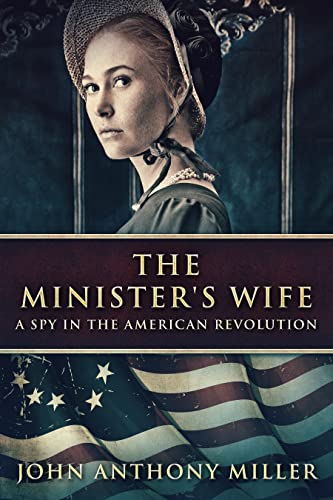 Review:  “Intrigue, danger, suspense, romance. Miller has a special talent of putting you in the time and place while you’re reading.”

Philadelphia, 1777, during the American Revolution. Abigail St. Clair knows many secrets, and the damage done if those secrets are revealed.

She arrives in Philadelphia during the British occupation with her new husband, a minister for the Anglican Church, knowing she’ll soon confront her former lover.

Betrayal wears many faces and impacts more than most could know. When Abigail sinks in scandal not of her own making, fighting wrongs that may never be righted, she steps onto a dangerous precipice, living two very different lives: a devoted minister’s wife, loyal to the Crown, and a colonial spy, tied to a man she loves more than most could imagine.

An awakening draped in fast-paced drama, The Minister’s Wife defines a woman who betrays country, family, and friends to serve a higher purpose, defying a ruthless enemy, ripping wrong from right and exposing sordid secrets.

On a subtler level, it explores the human psyche – love, ambition, trust and guilt – as friends and foes change places, and love emerges to conquer all.

Abigail St. Clair gazed at the Delaware River shimmering in the morning mist, the road to Philadelphia twisting beside it. After two years in New York, she was coming home. Her family was intensely loyal to the Crown, her father linked to London by both business and tradition, and they had left when the rebellion began, choosing not to remain in a city soon to serve as the colonial capital. She was wary of her return, knowing shadows from her past could easily find the present. Secrets, it seemed, were so very hard to keep.

“It won’t be much longer,” said her husband, Solomon St. Clair, as their carriage rattled down the road. The newly appointed minister to the Philadelphia Anglican Church, he was a bit portly, with brown, curly hair and round spectacles. Known for his intellect and an interest in philosophy, his passionate sermons merged the ancient world with the modern, contrasting good with evil.

Abigail stretched, leaning back in her seat. “It’s been a tiring journey,” she replied. Attractive, with blonde hair that framed her face and fell to her shoulders, her green eyes housed a curious twinkle that few ever failed to notice.

The road cut through a wooded slope that stretched to the river below, the water sometimes screened by shrubs and trees. It was quiet, an empty lane with no carriages, wagons, or riders, only the sound of the wagon wheels rolling down a rutted road competing with songs the birds were singing.

“A few miles more and you’ll be back in the city you once called home,” Solomon said.

Abigail was quiet, thinking of those she would see: friends, foes, and some who meant much more than she could ever admit. She wondered how much the city had changed since her departure now that it served as capital to a nation forming from seeds of rebellion.

“Yes, I should think so. I’m anxious to visit my cousin, who now resides in my father’s house. But I shall miss my sisters terribly—three of the closest friends a woman could ever want or need.”

They sat quietly, each minute that passed bringing their journey closer to an end. Trees surrendered to fields, an occasional farmhouse dotting the terrain, split rail fences containing cattle who curiously watched the carriage and two wagons that trailed behind it. Solomon withdrew a Bible from his leather satchel and was soon immersed in the Scriptures.

They had traveled almost an hour when they came to a crossroad. At first it seemed deserted, two roads intersecting to wander in different directions. But as their wagons passed through, they heard galloping horses.

Abigail opened the window and leaned out.

“What is it?” Solomon asked.

“A band of soldiers.”

He looked at her strangely. “Surely they won’t bother us.”

She watched a moment more and turned to face him. “I’m not so sure.”

The carriage came to a halt, the horses neighing in protest, as six colonial soldiers blocked their path. Wearing tricorn hats with blue coats and white breeches, satchels hung from their shoulders, carrying powder and shot. They gathered behind a lanky man who appeared to be their leader, their rifles at the ready.

“Where are you going, friend?” the leader asked.

“To Philadelphia,” said their driver. “We move the minister and his wife.”

The rebel leader dismounted. The sound of his boots trampling grass along the side of the road proved he was coming closer. When the footsteps stopped, the door abruptly opened.

The rebel leaned in. “Morning,” he said, tipping his hat. “I’m Captain Howard of the colonial army.”

“Is something wrong, Captain?” Solomon asked. “We near the end of our journey, and only hope to have it completed.”

“What are your intentions?” Howard asked.

“Why would you care, good sir?” Abigail asked, acting braver than she felt.

“The city is home to the Continental Congress. I only ensure no threat is posed.”

Solomon’s eyes widened with disbelief. “Surely you don’t fear us?” he asked. “I’m Solomon St. Clair, new minister of the Anglican Church. This is my wife, Abigail.”

“And the wagons contain your belongings?”

“They do,” Solomon said, indignant. “You may search them if you like.”

The captain studied them a moment more, a rugged man with a two- or three-day growth of beard. “The British plot to take the city,” he said simply.

Please click HERE to find The Minister’s Wife on Amazon.