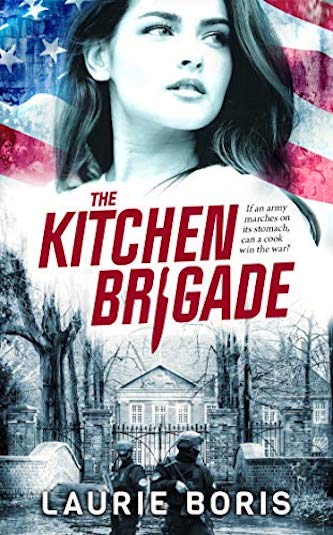 Passion, friendship, and loyalty are the ingredients needed to make heroes, and these unlikely heroes learn that just surviving isn’t enough.

If an army marches on its stomach, can a cook win the war? A story about food, friendship, loyalty, courage…and what unites us as the world tries to tear us apart.

It’s 2049, in a Russian-occupied America ravaged by civil war.

Valerie Kipplander—daughter of the assassinated secretary of state—is thrown in jail. When the regime discovers this daughter of privilege is also a talented culinary student, she’s forced into service in the kitchen of a Russian general whose troops occupy New York.

The general’s mansion proves a prison of a different sort. The head chef has a mysterious past. The Russians have a more insidious agenda than what they’ve promised. The resistance wants her on their side. And one of the guards wants her dead.

Valerie knows she must take a stand.

The risks are monumental, the choices few.

But how long can she serve the men bent on destroying her beloved country?

Before she was a number, imprisoned for her own protection, Valerie stood on balconies like this one and imagined her future. She might have even stood on this particular balcony, but she couldn’t remember. After a while, all the fine houses began to look the same. The same lovely views of the river or the mountains, the same architecture, the same grand marble staircase. One painting was like the next; one lakefront, one patio, one collection of antiques that she mustn’t, mustn’t touch.

And what did that young girl’s future look like, back then, when she stood out on the balcony to escape the men’s loud voices and the women’s gossip, the cloud of perfume and the stench of cigar smoke? An escape. Not what it would be like when she was grown up and married to her Prince Charming and in charge of a house like this one. But getting as far away from places like this as she could. She longed for peace, for independence, for her own modest home she could be comfortable in, feet-on-the-furniture comfortable, have a herd of cats and dogs and not bother what mess they might leave. She would grow vegetables and flowers and cook. Oh, how she would cook. And never again would she be shadowed by men in black suits and earpieces, or wear a precious gown that was so tight and fine she could only stand there looking pretty for her mother’s inspection, for the cameras, to soften her father’s public image.

The irony cut like the knives waiting for her back in the kitchen. That she had been conscripted to work in the very sort of house she’d longed to escape from. Possibly one where she’d been a guest, where she may once have sat at the long mahogany table in the formal dining room.

Her finery was now a chef’s jacket, and she was being allowed to cook, but General Grigori Alexandrov, whom she had yet to formally meet, was a philistine who took his steaks well-done and his vegetables cooked nearly to mush. As long as the plating was as artful as the dishes on the old reality shows he was obsessed with, he couldn’t care less about the taste.

She heard a rap on the window, and Valerie turned to see Two’s sour expression.

Svetlana nodded to her as she returned from the terrace, and pointed her toward a clean station and a tray of whole fish. Valerie’s nose wrinkled. It was not good fish. Not bad, but not fresh. Perhaps if they smoked it, it would be more palatable.

“Where did Dominick get this from?” Valerie asked.

The chef sniffed, her mouth a flat, firm line, one eyebrow sitting higher than the other. “We don’t ask that which we don’t want to know.”

Please click HERE to find The Kitchen Brigade on Amazon.