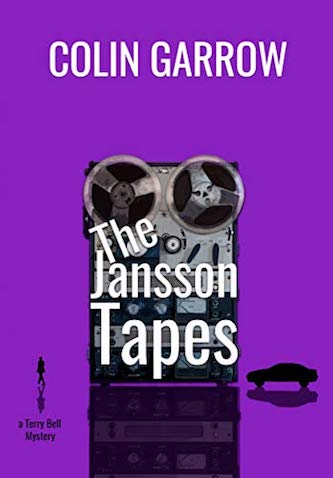 Caught between a suspicious detective inspector and a mysterious woman, can the wily investigator unravel the mystery before the killer strikes again?

When a familiar leggy blonde slides onto the back seat of his cab with the offer of work, taxi-driver and amateur sleuth Terry Bell isn’t keen.

However, compared to the tedium of driving a cab all day, the lure of another mystery is too strong to resist, and Terry agrees to help.

Tracking down a missing writer and his tape recorder sounds simple enough, but following the clues to a remote village, the case takes a dangerous turn when the man turns up dead.

After the police take over, Terry and his sidekick Carol return home to find their flat ransacked—and that’s not the only surprise.

Caught between a suspicious detective inspector and the machinations of a mysterious woman, can the wily investigator unravel the mystery before the killer strikes again?

It was a slate sky, sea-and-mist sort of day—the sort of day that’s going nowhere when all a man can do is count the minutes until knocking-off time.

Given the excitement of recent weeks, I had no reason to feel bored, but already the hum-drum reality of not being in fear for my life had taken the shine off things. With a piece in the local paper along the lines of local-boy-does-good, I’d expected to see a few enquiries flooding, or at least trickling along to my newly acquired website, but there was nothing, and not even Ralph’s encouraging texts were going to make me feel better. With summer fast approaching, I wasn’t looking forward to long days sitting in a hot car, sweaty tourists yapping in my ears and old wifies whinging about the price of a ride home.

To be fair, I didn’t exactly relish the thought of investigating murders on a daily basis, and the threats to me and Carol had proved more than a little scary, but I had to admit, it was a damn sight more exciting than sitting in a car all day.

Even so, my response to Caravan Queen Sheila Carver’s requests to see me tended to run along the lines of sorry, too busy, not feeling good, a bit over-tired—in fact any excuse that might keep her at bay for a few weeks or, ideally, several years.

As it turned out, it wasn’t Sheila who dragged me back into the sleuthing game that Friday afternoon, but another woman with rather more to offer.

Movement on the taxi rank had been slow all day and by two o’clock I’d only had a dozen pick-ups, so when a familiar leggy blonde slid into the back seat, I wasn’t about to complain.

‘Mr Bell,’ she purred, long fingers slinking over my shoulders. ‘I thought you might like to take me home.’

Elise Andersson had never flounced along a catwalk or strutted her particular stuff for the paparazzi, but as Fat Barry would say, she had the teeth, the tits, and the legs to do the job very nicely, if the need arose.

‘Still living at the same place?’ I said, trying to drag my gaze from her plunging neckline.

‘Still there,’ she said. ‘In fact, why don’t you come in for something to eat? Sven’s making sausages.’

I remembered all too vividly her husband’s penchant for pumping minced lamb into phallic forms. ‘No, you’re alright. I had a burger earlier.’

She laughed and sat back. ‘Coffee and a chat, then?’

‘We’ll see,’ I said. Keying the mic, I called the job in. Then pulling out into traffic, thought about the last time I’d visited the house, when the truth of my pal Frank’s death had emerged, along with a lot of stuff involving sex slaves, and other sordid goings-on. Not to mention who may or may not have been responsible for killing Big Ronnie.

Elise chatted away about nothing much as I headed out of town and onto the country road that led to the Andersson residence.

‘How is your girlfriend, Mr Bell?’

‘Carol? Oh, she’s fine, thanks.’ I glanced at her in the rear-view, noting the sly smile. ‘Aye, just fine.’ I wound the window down and let the cool air waft over my face, telling myself I’d no reason to feel guilty.

She shut up for the next ten minutes until I turned onto the narrow lane up to the house.

Crunching over the gravelled driveway, I slowed to a stop and peered up at the two-story structure. On my last visit, the Anderssons was in the throes of a revamp, and from the looks of it, they’d had new windows put in and done a bit of landscaping on the wide front garden.

Elise handed me a fiver but didn’t make a move to get out of the car, so I jumped out and sidled around to open the door.

‘Always the gentleman, Mr Bell,’ she murmured, giving me that sly smile again.

I followed her into the house and down the passage towards the kitchen. The décor had changed for the better and the bare staircase from before now had a plush-looking carpet on it that must have cost an arm and a leg per square foot. Several pieces of artwork ranged along the left-hand wall, two or three by local artists and a couple of Jack Vettriano’s. I wondered if they were originals—knowing the couple’s fondness for dipping their Swedish fingers in several financially productive pies, it wouldn’t surprise me.

Please click HERE to find The Jansson Tapes on Amazon.