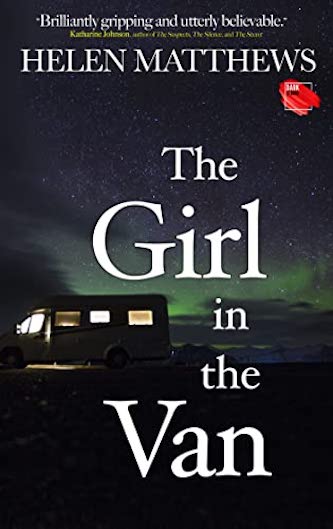 Review: The book’s focus on women’s social issues and perspectives gives it substance beyond the straightforward suspense genre.

Traumatised by events, Ellie’s mother, Laura, can’t bear to stay in the Welsh seaside town where she lives with her partner, Gareth. She escapes to London, breaking all ties with him, and refusing to tell anyone her new address.

After two years of living alone and working in a mundane job, Laura buys an old campervan and joins a singles holiday. Here, she meets Miriana, a teenage girl who bears a chilling resemblance to Ellie. As Laura uncovers Miriana’s story, she’s shocked by the parallels to her own life.

But stories can be dangerous, and someone out there will stop at nothing to prevent the truth about Ellie from coming out…

Sampler: The Girl in the Van

This extract is from the end of Chapter One. The main character, Laura, a former teacher, left her home and partner after a devastating event involving their teenage daughter, Ellie. She’s lived a solitary life for two years but recently made a tentative try at interacting with other people, buying a secondhand campervan, and joining a group holiday on a campsite in Wales. The passage begins as Laura leaves the campsite to drive back to London.

I restart my engine and swivel round for one final check on my living quarters. The bed fills the whole space. I’ve left it assembled and covered with cushions, but my backpack has burst open, spewing out clothes and shoes in haphazard heaps so it looks a bit like Tracey Emin’s Unmade Bed artwork. I notice a lump in the duvet – odd; I don’t remember stuffing pillows underneath.

A car beeps its horn. Dave, the campsite manager, raises the barrier, holds it aloft and motions me out. Cars rev their engines, and it’s hard to edge past along the narrow country lane. I glance in my mirror. That bump under the duvet is rippling gently, out of step with the motion of the van. It must be an illusion. Like that fleeting sense of movement you get when you’re staring out of the window of a stationary train and the one on the next platform pulls out. All the same it’s unsettling, but I can’t stop to check because the winding road has deep gulleys, hewn from rock, running along both sides and there are no passing places. I need my eyes on the road and hands clamped onto the steering wheel.

Seeing that bump has spooked me. What if one of the kids from the campsite climbed into my campervan while I was packing up and getting rid of my rubbish? Perhaps they were playing Hide and Seek. The last thing I need is to turn around and drive back to reunite a missing child with their angry parents. But if it is a child, wouldn’t they have realised we’re on the move and crawled out of their hiding place?

“Who’s there?” I ask in a hoarse whisper, glancing in my rear-view mirror.

Silence, apart from the thudding of my heart. Perhaps they’re scared.

I’m itching to check, but tall beech trees leaning across to embrace their neighbours on the opposite side of the road form a dense tunnel and block out light. The road is empty.

I grit my teeth. I won’t panic. I’ll find somewhere to stop and sort this out.

At last a sign for a picnic area comes into view and I reach a clearing in the trees, with wooden tables dotted around on scrubby grass. A Land Rover is parked in the layby, but no sign of a driver. I ease my van to a halt, wrench on the heavy handbrake, unfasten my seat belt and clamber through the gap next to the driver’s seat into my living quarters.

“Whoever you are, get out now.” I shove pillows and cushions aside to reveal a mound under the covers. My hand is trembling, and I can’t bring myself to touch it. What if it’s an injured animal? A horrific image of the decapitated horse’s head under the bedclothes in The Godfather slips into my mind. Breathing rapidly, I grasp the duvet in both hands and tug. It seems to be tucked in or weighted down. As I slide my hand down the side of the mattress to free it, a skinny arm thrusts out from under the heap of covers.

The arm is wearing a friendship bracelet and holding up a note as if it’s a white flag. Shock forces me to lean in and squint at the scrawled words: Help me. Don’t tell anyone.

A laugh that’s part-hysteria, part-terror catches in my throat as I yank back the duvet and uncover a girl with tangled dark-blonde hair and a nasty gash on one side of her face. She cowers away from me, covering her face with her hands.

“Sit up,” I demand, grabbing her arm. She’s a teenager, not a small child, and she’s wearing a white t-shirt with a faded photo of a band I don’t recognise. “What the hell are you playing at?”

The girl levers herself into a sitting position, keeping her face curtained by her long hair.

“Look at me,” I say, clamping my hand on her shoulder and turning her to face me.

She straightens her spine, rocks forward and flicks her hair back behind her shoulders so I have my first proper look at her face.

For the briefest of moments, I allow myself to believe it.