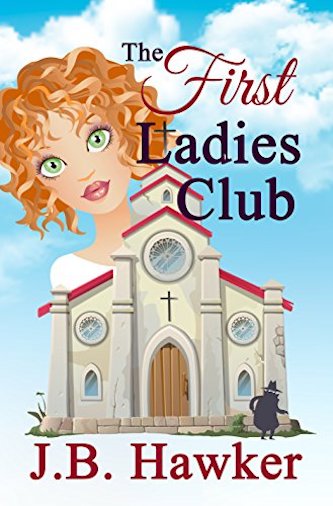 The women share sympathy and friendship, but when tall, shapely Naidenne catches the eye of an escaped killer, the Club goes beyond mere friendship.

The pastor’s wife is missing! Is the escaped felon to blame?

Whether living in a rectory, manse, or parsonage, life married to a small-town minister calls for faith, hope, and charity; plus heaping helpings of tact and the skin of a rhinoceros.

New to this life in the small coastal town of Bannoch, Oregon, Naidenne Davidson turns for support to her fellow ministers’ wives of The First Ladies Club.

The women share sympathy, friendship, and tips on dealing with difficult church members, but when tall, shapely Naidenne catches the eye of an escaped killer, the Club goes beyond mere friendship.

Step into the quaint parlor of the drafty Bannoch Community Fellowship parsonage, nibble a Snickerdoodle, sip your tea from a chipped china cup and share the adventure. Although some scenes may be too intense for the traditional cozy, rest assured, Gentle Reader, evil gets its just desserts and good will prevail.

Part-time realtor and full-time pastor’s wife, Naidenne Davidson, is too busy coping with life in a small town church parsonage to think about her beauty, let alone imagine what sort of jealousy, envy, or desire she is inspiring in the hearts of those around her.

Distracted by efforts to fulfill her new duties as unpaid pastoral assistant, Naidenne is caught off guard and no match for the sociopathic killer who abducts her, bent on living out his basest desires.

Have the pressures of the pastorate driven Scott to do something terrible? Or are the authorities wasting precious time, with Naidenne’s life hanging in the balance?

When even members of Scott’s congregation begin to wonder about his guilt, can Naidenne’s friends in the First Ladies Club, help? Can these women of diverse denominations, ethnicity, cultures, and ages put aside their differences and work in harmony to find her?

Old friend, Bunny Elder Banks, arrives from Texas to join the search, but is it already too late?

When Scott entered the coffee shop shortly after seven o’clock, the four trustees were already seated at a table with half-empty cups of coffee in front of them.

“About time you got here, Pastor, the day’s about gone,” red-faced Orville Locke greeted him.

He pulled a bandana from his unbuttoned and overstuffed overalls and mopped his shiny head, already beaded with perspiration.

Scott feared for Locke’s health. Orville always looked on the verge of a stroke and the half-eaten doughnut on the table next to his coffee wasn’t going to help.

“These youngsters like to lie in bed half the day,” Josiah Watkins added in his raspy voice.

Watkins was the oldest active member of the congregation. A small, dried-up twig of a man whose attitudes were firmly planted in the early twentieth century, he still managed to exert a major influence on the business of the church.

“Ah, cut him some slack, you two,” Bill Odem said.

“The man’s still practically a newlywed,” he went on, “I wouldn’t want to crawl out from under the covers, either, if my Effie looked like Mrs. Davidson,” he added while wiggling his eyebrows and drawing an hourglass shape with his hands.

Bill thought of himself as a funny man, patterning his repartee after 1960’s insult comic, Don Rickles, whom he, unfortunately, resembled.

Scott smiled thinly at the others as he sat down.

Bill signaled the waitress and she approached with a coffee pot at the ready to pour refills.

“You gentlemen ready to order? …and I use the word ‘gentlemen’ ironically, just so’s you know,” she added. “Except you, of course, Pastor.”

“What’ll you have, Padre? Did you work up an appetite this morning?” Bill said with a broad wink, looking around to be certain no one missed his innuendo.

“I’d like a scrambled egg and whole wheat toast, Gladys,” Scott answered the waitress, ignoring Bill’s comment. He feared Odem was slipping into some sort of raunchy second adolescence.

“So, what’s on the agenda for this morning?” Scott asked Orville, the senior trustee, as the others gave Gladys their orders.

“We noticed a big wet patch on the ceiling of the choir’s dressing room. Looks like the water’s running along the rafters from that flat section near the steeple,” Orville explained.

“So, with the budget crisis going on, we wondered what you could offer us to help out, Pastor,” Bill said.

“Have you gotten quotes on the necessary repairs? Just what are we looking at?” Scott asked.

“Well, no actual quotes, you might say, but my brother-in-law got a new roof put on his house a few years ago and it was a huge expense, thousands and thousands, and that was a simple house, none of these weird angles like we’ve got on the church,” Orville said.

“We gotta cut expenses somewhere, or we’ll never pay for it,” Bill insisted.

“We’re thinking, since your pretty wife works and you got two incomes, now, we could cut back on your salary to cover the roof expenses, just until it’s paid for, of course.”

“Hold on a minute. I’m not ready to even consider something like that, until we have firm figures from a few roofing contractors. All we know for certain is we have a leak. Until a professional looks at the roof, we can’t tell what sort of repairs are needed, let alone their cost,” Scott told the men.

Their breakfasts arrived as Scott spoke.

The trustees exchanged looks and began to concentrate on the food.

Scott couldn’t get a single bite past his rising anger. He took a sip of coffee, pushed his plate away, and grabbed his check.

“I’ve got to make a run by the hospital before heading to the church office, so I’ll be going now. When you get some quotes on the roof, we can discuss it again.”

He made his way stiffly to the cashier, keeping a tight rein on his anger until he was safely in his car.

“Damn and blast those men!” he cursed, slamming the steering wheel with his fist.

Taking a few deep breaths, he regained his composure and began to share his feelings with the Lord. As soon as he felt calm enough, Scott started the car and drove away.

It was people like his trustees who made too many good ministers decide to leave the pastorate, Scott thought. He had run up against these men, and others like them, throughout his ministry, yet somehow always managed to keep his perspective.

It was different now. He wanted to protect Naidenne from the more challenging aspects of ministry life for as long as possible.