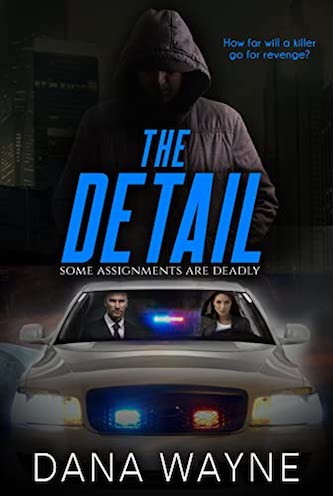 A ruthless killer bent on revenge targets Detective Jessica Foster, and his thirst for vengeance will only be satisfied by her death.

How far will a killer go for revenge

Some assignments are deadly…

Detective Jessica Foster is worn out. She’s spent months hunting a crazed killer while juggling a caseload that never ends, her unpredictable family, and forbidden feelings for her partner, Seth Hamilton.

When the suspect she sought is finally captured near Denver, she and Seth must bring him back to Texas for trial.

She dreads the long drive because it means close proximity to the man who haunts her dreams and makes her long for things she can never have.

Seth has known for some time that Jess is the one for him. Instinct tells him the feelings are mutual, but she never lets her guard down.

Undeterred, he vows to use the prolonged road trip to get beyond those barriers and uncover the truth.

Until a disastrous turn of events changes everything.

Now a ruthless killer bent on revenge targets Jess, and his thirst for vengeance will only be satisfied by her death.

Walls waited behind a barred metal door, hands and feet shackled to the chain around his waist. Disheveled dirt-colored hair stuck out at odd angles as he stood with head bowed and shoulders stooped. The faded orange jumpsuit was a size too large, the legs pooling around his ankles.

Jess knew that behind that innocuous harmless-man-mask existed a vicious killer with a history of violence against women. Prostitutes were his victim of choice because they seldom pressed charges. But Annie Potter did. Twice. And paid for it with her life. The evidence wasn’t substantial enough for the DA to prosecute, and he walked.

Another woman ended up in the hospital and refused to press charges before he hooked up with Lottie Moore. Even after two domestic disturbance calls to their place, Lottie declined to press charges, claiming he loved her, and she had no reason to fear him.

She was dead wrong.

One step ahead of them, he skipped town before they could arrest him.

Four months of beating herself up for not moving fast enough ended two days ago, thanks to a broken taillight.

The door’s lock clicked, bringing her back to the present with an unpleasant jolt. She resisted the sudden urge to take a step back when Walls entered the room and stopped six feet away.

His posture didn’t change as he slowly lifted his head and stared directly at her.

Gone was the precisely orchestrated façade he showed the world. In its place stood evil personified.

Eyes black as volcanic rock telegraphed anger and hatred like a physical blow. His nostrils flared when he drew in a breath. The muscles in his cheek worked as he clamped his jaw tight, then released it before lowering his head.

Heart racing, she glanced at Seth. His attention was on the jailer and the paperwork. If he saw Walls’ display, he gave no sign.

“No way in hell would I want to be in your shoes right now.” The man behind the desk spoke to Seth as he reached for the paperwork transferring the prisoner to their custody. “He’s bat shit crazy.”

Seth passed the signed paperwork to him. “Thanks for taking care of this so quickly.”

“No problem. Glad to have him out of here.” The man hesitated, and his eyes flicked from Seth to Walls. “Weather’s tricky this time of year. More snow headed our way. Weatherman says another six to eight inches is possible today. Up this high, though, it’s likely to be more. Hope you have snow chains.” Brows furrowed, he squinted from Jess to the prisoner.

Jess’s hair prickled on the nape of her neck. She didn’t relish the idea of a delay of any kind with Walls in the car. Before she voiced her concern, Seth spoke up.

“A couple of your men are working on the chains. With any luck, we can be through the worst of the weather in a couple of hours.”

“Maybe. But more’s on the way.” He scratched his chin and shuffled the papers. “Where’s your first stop?”

He shook his head. “I-25’s congested on a slow day. You can plan on at least three to four hours in this weather.”

Jess kept her expression neutral. If they had a Plan B, he was the only one who knew it.

The jailer and two officers escorted them from the small processing room to the sally port, where their vehicle waited.

“Snow chains are ready to go, Detective,” said one of the men installing them. “You know how to take them off?”

Once Walls was safely ensconced in the back, Seth got behind the wheel.

The killer’s anger was an almost tangible thing. “It’s a long way to Walker,” he pronounced at last. “A lot can happen.”

Jess’s skin crawled, and her fingers trembled as she buckled her seat belt. His words, though softly spoken, carried the threat of danger loud and clear.

Please click HERE to find The Detail on Amazon.