Sampler: The Dead At Heart by Susanne Leist 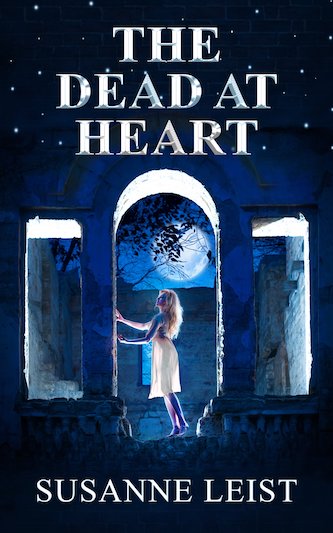 An explosion at Chateau Frontenac in Quebec doesn’t stop Shana and her friends from saving their town, and maybe even the world.

William’s bite bonded Shana to him, but he didn’t ask her to mate with him for life. She isn’t ready for a lifetime commitment. Now, William excludes her from his vampire meetings.

Shana understands he’s an original vampire with immense powers. For them to be a couple, he has to treat as an equal partner. If William doesn’t respect her, then what are their chances of finding happiness?

Shana speaks to Linda, her best friend, of her fears.

“Paradise is an illusion.” Shana’s face grows heated as her frustration mounts. “Oasis is a haven for vampires. I’m tired of their battles. The Watchers get rid of an evil group of vamps, and another group arrives and attacks. It’s a vicious cycle. Vampires are trouble.”

“We will have a happy ending.” Linda lifts her head. “Don’t lose faith. The Watchers will protect us, and Gregg has an elite force of original vampires.” She touches Shana’s arm. “William loves you; he won’t let something happen to you.”

“The vampires keep secrets from us.” Shana swallows the lump in her throat. “I don’t want to live with vamps anymore, and I need time to decide on my relationship with William. One minute, I’m suffocating, and then the next, I’m lost without him.”

As a new enemy descends on Oasis, Florida, Shana turns to Sheriff Sam, who broke her heart. Can she trust the human-vampire?

This begins Shana’s journey to fight vampires and werewolves with Sam at her side.

An explosion at Chateau Frontenac in Quebec doesn’t stop Shana and her friends from saving their town, and maybe even the world.

Sampler: The Dead at Heart

As the howls echoed louder, Shana jumped. “Are the animals in the house?”

“How can that be?” Linda clutched Shana’s arm. “Where are the guards?”

A black form lunged at them.

She grabbed Linda’s as they raced from the room. The enormous beast blocked their path to the stairs. In the darkness, yellow eyes glared at them. They dodged the multiplying animals and climbed the steps as high-pitched cries resonated through the house. “Hurry.” Dragging Linda behind her, Shana rushed to Linda’s suite and bolted the door behind them.

“I didn’t know the wolves are so huge.” Linda gulped her words between frantic breaths as she leaned against the door. When the animals lunged at the door, Linda jumped back. “If they break through the door,” her voice trembled, “they’ll tear us apart. I thought the vamps could protect us.” She slid against the wall to the floor.

Shana raced to the window. Shadows darted back and forth across the backyard. A few forms lay lifeless on the grass. “Men and wolves are fighting. There’s nowhere for us to run.” Her gaze flew to the door as it cracked from the force of the wolves’ bodies. She spun to Linda. “The wolves have us surrounded. We can’t escape them.”

Linda ran to the window and pointed. “Wait. Is that William?”

A tall figure marched across the lawn. Shana recognized the confident stride as he approached a melee of men and wolves rolling on the grass. At his shout, the animals raised their heads and scampered away. “William chased the wolves away. How did he do that?”

“The wolves might have recognized him as an original.”

Chills raced through Shana’s body as she asked, “Aren’t Gregg and many of his vampires, originals?”

A loud noise made them turn. The door burst open, and the animals slunk into the room, backing them against the window. Growls and snarls melded into a cacophony of horror in Shana’s head. They filled the room, saliva dripping from gaping jaws, moonlight glinting against pointy teeth. Head canted to the side, one appeared taller and broader. It stepped forward on hind legs and watched them through slanted yellow eyes. His peers, the ones standing upright, gathered around him.

Linda cowered beside her. “What do we do?”

“We fight.” Shana’s heart raced as her gaze darted around the room, searching for a weapon.

“They appear almost human.” Linda pointed at the tallest one. “It’s as if he wants to speak to us.”

“Not he. It,” Shana yelled. She needed a weapon—an umbrella. There was one beside her bed. “We’ve faced monsters. We kill or are killed.”

A whistle pierced the silence.

Growls faded to silence as Shana spun to Linda.

The wolves vanished, and so had Linda.

Please click HERE to find The Dead at Heart on Amazon.