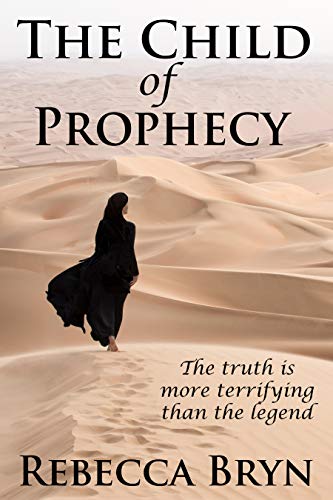 An optimistic dystopian story of courage, hope, and unbreakable love, set five millennia in the future in a time of war and political turmoil.

The Child of Prophecy is set in the High Atlas Mountains of Morocco at some time between the Great Flood and the Second Coming. Kiya is a village healer and her husband, Raphel, is a storyteller, keeping alive the oral traditions of their people. Life is peaceful, ordered, happy, and the most excitement they have is regular visits from Abe, an itinerant peddler who trades across the mountains with his mule, Moses.

Abe, however, is not what he seems, and though he has Kiya and Raphel’s best interests at heart, he has a secret agendum laid down by a long-dead pope that is sometimes at war with his love for his friends. He has dedicated his long life to watching over the village where Kiya lives, but why? What is it he’s not telling her?

All goes horribly wrong when a pagan, war-hungry cult from the northern side of the mountains descend with arson, rape, and slaughter on their minds, and an ancient prophecy to fulfill. Kiya is kidnapped and forced north over the mountains, but what has the prophecy to do with Kiya? Does Abe know?

Alaric, one of the barbaric Northmen, sees Kiya as the legendary ‘Gift’ of prophecy he’s been sent to find, and he rapes and kidnaps her and forces her north over the mountains, leaving Raphel for dead amid the burning ruins of his village.

Raphel lives and determines to set off in search of Kiya. His only aids are hope, love, and a headful of stories. Abe goes with him, but his reasons for this aren’t quite what they seem, and he will find his allegiances sorely tested.

That the chase on foot across the mountains in winter will be hard and long is not in doubt, or that the sea voyage will be fraught with danger, or the trek across the desert under a burning sun less deadly than that of their ancestors who fled persecution from East Africa.

That gentle Raphel will have to use every ounce of his knowledge, wit, compassion, forgiveness, and courage to rescue his wife, is certain, but who will prove to be his friend and who his foe, and what is this prophecy by which the Northmen set so much store? Why is it so important that they will kill and risk their own deaths to fulfill it – and can such an ancient prophecy be trusted?

Sampler: The Child of Prophecy

Death suppurated from the pile of stiffening bodies; their blood-stained clothing flapped gently in the breeze, their limbs tangled at impossible angles, and sightless eyes stared skywards at the circling vultures. A fly landed on Raphel’s nose and walked across his eyelids, pausing to sample the crusted salt in the corner of his eye. More flies buzzed noisily, incessantly, occasionally landing on the blood that had congealed on his leg. The body next to him had no head, but he could tell by the bone knife in the still-clenched hand, that Guddaa Mana had lost its oldest and most revered Abbaa Bokku, their village elder.

His limbs were stiff with pain, and his ribs stabbed, but apart from that one brief look in the early hours by the light of the burning houses, he hadn’t moved. He listened, as he’d listened all night, to the sounds of the Northmen and their rough but melodic speech that was distinct from their own softer tones. Their voices were fewer now and quieter as if they were moving away.

He waited going over in his mind again what had happened and how he’d failed. They’d had little enough time to get the women and children to safety after Abe had run into the village, breathless, clutching his chest, and hauling his mule after him.

He’d thought he could save Moti’s daughter, but the Northman had been too strong and too well-armed, whereas he was weak, a mere storyteller, not a fighter, and his slight form and simple work-knife had been no match for his opponent’s strength and weapons.

Had he bought Moti time to reach the cavern? Was Kiya still safely far from home? His leg throbbed and breathing hurt. He’d taken a blow to his chest and the Northman’s spear in his thigh: he’d been pinned to the ground unable to move while Temara was savagely butchered. Why had the larger soldier slit the smaller one’s stomach? What was it he’d said? Velik’s orders were to bring back prisoners, not kill them all. What did this Velik want with prisoners, and where would they be taken?

Unable to be of any use, he’d played dead, letting his limbs go limp when the spear was jerked out of his leg, and he was thrown over the shoulder of a Northman and hurled onto the pile of bodies.

It had been silent but for the buzzing of the flies and the mournful squawk of the vultures long enough for the sun to move the shadow of a dead limb across his nose. Cautiously, he opened one eye and then the other. He turned his face and confronted blue Northman eyes, sightless and staring. He raised his head. The village appeared deserted. Agony speared through his leg and chest as he tried to move.

He crawled across the bodies dragging his wounded leg and dizzy from loss of blood. Once in the cover of a stand of juniper bushes and low oaks, he rested weak and breathless. The movement had opened his wound, but it was a flesh wound and not as deep as he’d feared: he tore a strip of cloth from his shirt and bound his thigh. He’d lost a lot of blood already and couldn’t afford more. Slumped against a rock, he waited, breathing raggedly: he had to be sure no-one had seen him move before he attempted to reach the cavern. He’d wait until dark.

Kiya’s fingers were swollen and as purple as a ripe bilberry. Alaric had used her again, but she’d given him no satisfaction. She’d lain limp in his arms and thought of Raphel and Jalene. It was only her body Alaric abused, not her spirit. Her spirit lay with Raphel.

Alaric shook her again. ‘Pack what you need. Hurry.’

‘Where are we going?’

‘You ask too many questions. Pack for the cold. Bring what food you have.’

She did as she was told and included her precious sheets of waxed paper for collecting herbs. Medicines were something she never passed by. Even a brute like Alaric would understand the need for herbs and healing. She looked around the room seeing only loss. Somehow, she’d find a way to escape and return for Jalene and Raphel – if they were alive. She wrapped her pack and her bedding roll in waxed cloth against the wet, threw them over one shoulder, and headed outside.

Alaric bound her wrists again and tugged her forward. She averted her eyes from the pile of bodies that bloated in the sun and followed him in silence as he headed away from the village.

Please click HERE to find The Child of Prophecy on Amazon.