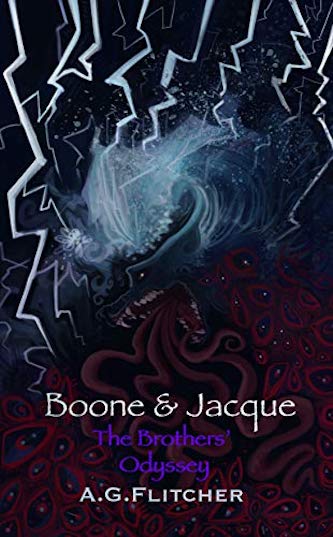 Review: “Flitcher’s great imagination takes readers into a world that is original and full of surprises.”

Boone, Jacque, and Shammy have been cast away to a wasteland under King Reeve’s control.

In which they must find Flint on their journey back home.

Even though the repercussions could be disastrous and heartbreaking.

What is much worse, and far more unpredictable, is the kind of home they could be coming to.

The Boone and Jacque series is in the finals for the OZMA Award. Given by Chanticleer Reviews.

Unimaginable destruction had come to Saddleton in a relentless blow. Some people were pulled into it unwillingly, while others were able to hide but not for long. Annie, Flint’s mother, sat in her juniper-green satin eighteenth-century love chair in front of a crackling fire that dimly lit the living room. She was sipping her own brew of tea, a mixture of honey, hibiscus, lemon, a stick of cinnamon, a hint of gin, and a mint leaf. She stared out the window, drained from her constant worrying about her son’s worsening symptoms and secrets she kept from him and all of Saddleton. She wondered what would become of her and Flint if the chaos outside her window seeped into her home. A neighbour of hers that she had known for years screamed for mercy as she ran down the street, being chased by a whirlwind of the same sand that had nearly cooked Boone and Jacque alive. As it swirled and licked her with incinerating heat, tears fell into Annie’s tea. As easy as it would’ve been to be part of everyone’s heart-palpitating panic, she remained seated and numb from all the trouble the mayor and Moen’s grandson had put her through.

She certainly couldn’t forget the threats they had made towards her when she spoke up. She had bubbled with rage when they said her son should be taken somewhere far away from Saddleton if he kept spilling secrets they wished he never knew. She took a long sip of her tea and used a silk baby blue handkerchief to pat her sore eyes dry. Keeping it in her hand, she got up delicately and passed through the darkness of the living room. The red sky brimming from the window bounced off her handkerchief and ivory nightgown. Crackling from the fire ceased, but the flames gave enough light for her to see a picture of her husband and her standing on boulders along the strong current of the Bonzine River. It was a memorable moment for her that made her heart melt and break simultaneously. When they had returned home later that night, he had written her a poem. The following morning, he was gone. It hurt her so much that he had left without reason or signs of change of heart. All she had left of him was the poem, which she held on to tightly weeks after he was deemed missing indefinitely. The single scream she heard earlier from her neighbour multiplied in echoes. Startled, she closed the blinds and grabbed the photo of her husband and her. Sniffling and trembling, she recited his poem softly with the picture clutched to her chest.

She inhales my rested heart

Into my once blissful, camomile-calmed chest

Blood bubbles at an alarming and ever-climbing speed

However, the heart should not be jealous

Before I met you, Annie, love was fleeting Like honey and strawberry gum

Chewed until it had no flavour

And lost its vibrancy

But my love my for you is esoteric

A garden of flowers that grabs you by the heart

Stings your eyes and drowns your lungs with a powerful fragrance

I love you, but love to another without love to oneself is unfair and meaningless

Without you, I have no meaning, squeezed of the few droplets of colour and understanding

Of who I want to be; without you, I simply cannot be . . . but I want you to be happy and safe

So I will dance with this sorcerous until I can no longer feel my feet touch ground, but I will still feel the gardens sting

At first, the last few lines convinced Annie he had committed suicide, but this thought was an emotional manifestation she wanted to be true to give a reason for his abrupt goodbye. As she spoke to the police and her tireless search for him cemented her sense of loss, that fictional thought left her as quickly as she cried for him to come bursting into her arms. Her tears trickled once again from her emerald-green eyes and down her pleasant olive-skinned facial features, thinning over her protruding collarbones and lightly soaking her nightgown. She could hear Flint coming into the living room.

Please click HERE to find The Brothers’ Odyssey on Amazon.