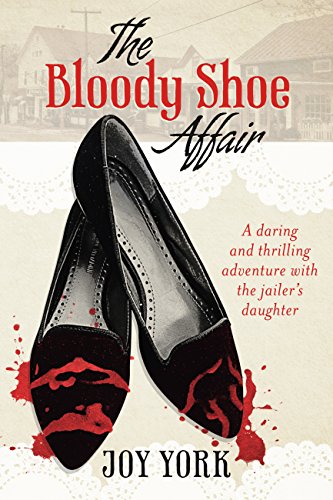 Review: By hook or by crook the girls have a nose for smelling the mystery just around the corner and the next thing you know, they are right in the middle of it.

A daring and thrilling adventure with the jailer’s daughter

In this mystery set in 1968, Christi, a shy and awkward teenager, never expected to get sucked into helping her cousin, Lily, the “double-dare-you” daughter of the county jailer, try to solve the grizzliest murder the town of Roselyn, Mississippi, had ever seen.

Then again, Christi had been entangled in her misadventures before. So a whirlwind week of spying, lying, crawling through tunnels, and sneaking into the jail should have come as no surprise to Christi.

Lily, a vivacious prankster, loves adventure. It’s not hard to find when you live in a house connected to the jail. Christi, a city girl, is self-conscious and afraid of everything.

Still, she’s drawn to the excitement and adventure that Lily always seems to provide. Christi arrives for a visit in time to help her cousin discover what happened the night Lily observed a county deputy drop a pair of women’s bloody shoes from a bag.

After a chance meeting with the accused, they learn new information that sheds doubt on his guilt. Seeking justice, Lily sets a plan in motion that takes them on an adventure of risk and surprising twists.

They not only discover unexpected truths about the case but about themselves as well.

As if this place didn’t scare me enough, now there could be a murderer on the loose. This was the kind of stuff that I was really better off not knowing. Maybe I should’ve stayed with my family out in the country.  “Do you think Uncle Bill has another bat?” I was serious.

“No, I’ve got the only one, but I’ll take care of both of us. I just happen to know where the keys to the deputies’ gun lock-up are…. even though Daddy keeps trying to change the location. He’s so predictable. He knows I always figure out whatever he tries to hide from me. You’d think he’d finally give up, but it’s kind of our little game.”

“You’re such a chicken. They wouldn’t miss one little gun. You never know when it might come in handy.”

“No way! You wouldn’t know what to do with one if you had it.”

“Sure I would. Daddy takes Mama and me out on Daddy Joe and Mama Lou’s farm to let us practice. When Mama asked him why it was so important for us to learn to shoot, he said, ‘just in case.’ I’m getting pretty good at hitting the cans,” Lily said proudly.

“My daddy let me shoot his rifle when he took me rabbit hunting one time. It knocked me backwards on my butt. That was enough for me. No guns!”

“All right, we’ll pass on the guns for now. What about a knife? There are lots of butcher kni….

“Stop it! You’re scaring me. No guns. No knives! Let’s just stick to the bat. That way, if you mistake me for the killer, I’ll only have a lump, not a bullet hole or a stab wound!”

“Don’t be silly. A killer would be much taller than you. I couldn’t make that mistake.”

“Very funny.”  I’m never sure when Lily’s kidding. She likes to get me going.  She could be serious about the gun and knife. Better not to think about it.

“I just had a great idea. I know one way we can find out what happened. We can check the evidence room in the basement of the jail. I bet that’s where the bloody shoes are stashed. They keep all of the evidence there from crimes that were committed in this county. There’s some pretty cool stuff in there.”

“What kind of cool stuff?”

“Let me think.” She rolled her eyes up to the ceiling and scratched her chin to exaggerate her thinking process. I’m sure she had all of the items memorized by heart. “There are several illegal sawed-off shotguns. I know they came from moonshine still busts that Daddy’s been involved with apprehending. There’s a file cabinet with loads of bad checks and stolen papers. I’m not sure what all that stuff’s about…too complicated. There’re some clothes from an old rape case that have been there for years. The evidence tag’s so old the dates are smudged. There’s some neat stereo equipment that was stolen from Ralph’s TV and Electronic Warehouse. Just bunches of stuff like that. The older stuff’s tagged with just a date and a case number. There was a trial a couple of years back where a piece of evidence came up missing. It turned up a month later in the evidence room after the judge was forced to dismiss the case due to a lack of evidence. Someone had put the wrong case number on it, so it was missed. Now they put lots more detail on the tags so that won’t happen again.”

“It was a gas station holdup, armed robbery. The man disappeared as soon as he got turned loose…. Guess he was afraid they’d change their minds.”

“Why didn’t they arrest him when they found the evidence?”

“He was long gone. Daddy said he probably moved out of state and changed his name.  Deputy Rudy Sikes was the one who goofed up the evidence tag. He almost lost his job. I think he got a warning or something like that. Daddy said the sheriff realized it was a mistake, a big one. It’s pretty serious to have to let a felon go free. Luckily, no one got shot in the robbery, just the Moon Pie display.”