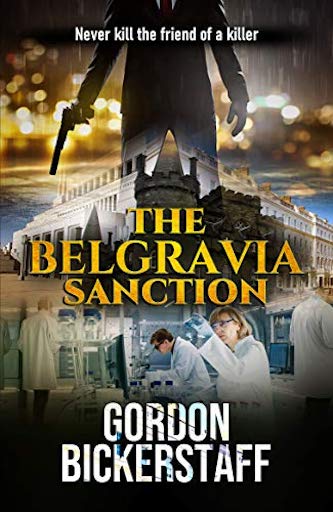 With adrenaline setting her blood on fire, she pushed onto her knees, and scrambled to reach her pistol.

In a remote Scottish cottage, two men and two women die from gunshot wounds. Police believe one killed the other three before committing suicide.

One of the four worked undercover for the Lambeth Group, and his team leader is missing. To find out what happened, a second team will follow the bread crumbs.

Led by Zoe Tampsin, they expose a terrorist group operating in plain sight. An attack is imminent. It will destroy the special relationship between the UK and the USA.

Zoe and her team prepare to stop them. Unaware of a deep-seated traitor, determined to stop her at any cost.

Two BMWs meant at least four targets. Her Browning wouldn’t provide enough firepower, so she backed along the side of her car, heading for the boot.

In a hidden compartment, she kept an MP5 assault rifle, and a bag of other toys. If it’s drama you want; I can do noisy, she thought.

Before pressing the button to release the boot lid, she heard a faint crush of pebbles on the drive behind her. Still crouched, she turned to see a man three long strides from her.

Bearded and bald, and a towering six-footer, his feet pounded the pebbles. He raised a military dagger in his right hand, but he wasn’t close enough to grab her for a throat cut.

He lunged, and with his free hand grabbed her pistol hand.

Toni blocked his knife hand, and deflected his downward push. Her boots slipped on the pebbles, and their bodies crashed against the back of her car before sliding to the side. Strong body odour suggested a nervous and fearful man, which raised her confidence.

His strength threatened to overpower, so she head-butted his nose, but not hard, because there wasn’t enough space to draw her head back. She deflected his dagger hand down, then let go of his wrist. He snapped the weapon back for an arching stab.

As he drew back, she gripped the gun barrel, swapped the pistol to her other hand, and rammed the butt into his eye.

His stab followed through, and embedded the dagger up to the hilt in the plastic bumper.

In the scuffle, her pistol flew out of her hand, and landed two metres away. She grabbed his beard, and pulled his head onto the bumper, but not hard enough to do him any damage.

He pushed her to the side, and with both hands, he struggled to haul his knife out of the bumper.

With her heart thumping, and her heels dug into the pebbles, she leapt up, flipped around him, and clamped her hands on his head. He strained against her attempt to twist his head to the right.

With strong neck muscles, he resisted, and anchored his hands on the knife to focus his strength. After ten seconds, she changed direction, and used his resistance against him. His neck snapped with a horrible crack, and he flopped out of her arms.

Before she gathered her thoughts, her heart raced with the sound of more footsteps pounding the pebbles. This time, coming from the cottage. With adrenaline setting her blood on fire, she pushed onto her knees, and scrambled to reach her pistol.

The hurried footsteps ended with a hard stop, digging into the pebbles.

She glanced back to see a man at the side of her car with his pistol drawn on her. ‘Drop it,’ he demanded.

With her back to him, she raised her hand to show him she held the pistol by the barrel. While she knelt to lay the pistol at her feet, she reached into her pocket. Slowly, she pushed onto her feet, and turned to face him with her hands above her head.

Focused on her face, he didn’t see a perfume spray couched in her hand. He did feel the fluid hit his forehead, and thought his eyes were ablaze.

While spraying him, she dipped to the side, but he didn’t fire on her.

His hand instinctively rushed to his head to dig the burning fluid out of his eyes.

Toni dashed forward, grabbed the barrel of his pistol, and thrust it against the roof of the car to crush his fingers. Almost at the same time, she rammed the heel of her right hand upwards to connect with the bottom of his nose, and launch him backwards off his feet.

He landed heavily, and in the silence immediately after, she heard boots running behind her, then a hard stop. Glancing back, she faced the dead man’s mate. Five metres from her, he stood rigid in the forward firing position with a pistol aimed at her body.

With a gentle nudge of his pistol, he pointed to the space at her feet. Nodding her submission, she tossed the fallen man’s pistol, and it landed close to her Browning HP.

Please click HERE to find The Belgravia Sanction on Amazon.