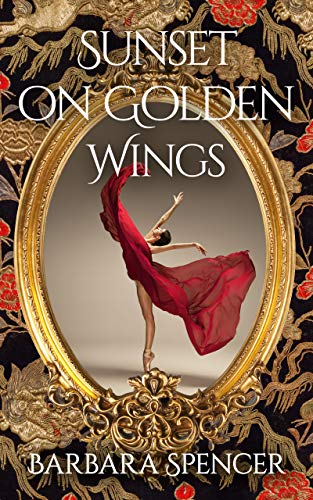 Sometimes in the hush of night, I imagine a filament of silk connecting me to the heavens, and my story has no end.

Three years have passed since the tragic events of that summer when swans first visited the city and Maidy is on the way to New York, where Ruth, now a famous film star, is to be married.

Promising Pappy to toss her memories overboard proves impossible when a chance encounter with a passenger brings back thoughts of Zande and the realization that she still loves him.

On her return, a casual job offer from Hans, to work in his art shop in Flambeau in France, brings Justine into Maidy’s life.

But all too soon Ruth and Zande step out from the wings and reassume their dominance of events.

Ruth re-awakens Hans’ boyhood passion for her, placing his relationship with Justine in jeopardy, and Zande?

Sometimes in the hush of night, I imagine a filament of silk connecting me to the heavens. I give it a gentle tug to remind the god in whose care I have been placed that I am still here and as yet my story has no end.

Far below me, the ocean danced to a rhythm it knew well. My encyclopedia promised flying fish, dolphins, and whales that jet great columns of water into the air, while my lingering dreams of childhood yearned for a glimpse of pirates in black-painted ships, with tall masts and salt-caked sails, wet with spray from the vigorous pounding of the waves. With their sails trimmed and taut, their guns primed and ready, they would have easily overhauled any ponderous merchantman that lacked both the skill and the firepower to outrun them. Yet, so far, in this rolling, pounding maelstrom of grey water, I had seen nothing apart from a floating piece of driftwood.

Aware the deck of the liner was likely to be busy during the day, that morning, seeking relief from the snoring of my companion, I had dressed and left the cabin as dawn broke, wanting to experience my life-long ambition of running away to sea. Over the years, sailors who knew what it was like to stare death in the face had become a familiar sight on the quayside near our home, and I had long envied the ease with which they manhandled a yacht’s canvas wings into place, their feet striding agilely across the deck, their thoughts, as were their movements, equally unconfined. As a child, I had yearned to take their place. Content with their role in the world’s hierarchy, they remain involved in the minutiae of daily life, their gaze seeking nothing apart from a fresh horizon.

Now I had been given that opportunity, what would I make of it…?

From the moment the wedding invitation arrived in the post, my decision to travel to America had undergone more than one sea change. Each morning in the previous months, when I awoke, I flew to the window of my bedroom vowing this to be the day when I confronted the world head-on and threw away my dreams. Yet, by nightfall, those same reminiscences dragged me down again. It was Pappy who, although unaware of the full import of that summer three years ago, had witnessed first-hand the suffering it brought, and on learning of Ruth’s invitation, refused to let me back out.

‘Maidy, I realise how unsure you are to leave the nest. Please remember, even the most reluctant of fledglings must eventually  take to the air and assume their rightful place in the skies.’ He hugged my arm. Perhaps in his mind, I had grown too old for hugs and kisses. ‘America is not exactly the place I would have chosen for your maiden flight, nevertheless, by all accounts they are a most generous people. Although somewhat noisy and assertive, if the newspapers are to be believed. Which, for you anyway, my child, may prove beneficial. If you stay the full month, which Meneer Endelbaum’s letter suggests, hopefully, some of that assertiveness will rub off on you.’

As always, I replied in kind, schooling my voice into playfulness.

‘Pappy, if I adopt American habits, you won’t like me anymore because when you want a cup of tea, no doubt I’ll tell you to get it yourself.’

‘And a good thing too.’ He nodded, grateful for my effort, and patted his paunch. ‘It may help others to notice you. With Berthe safely married, you deserve to be noticed.’

Despite the sadness that has overtaken our lives, Pappy hasn’t lost his habit of presenting both rebukes and homilies in a jocular fashion although, at first, when Pieter once again vanished, even he forgot how to smile – the lines of love and laughter that, as a tiny child, I had traced with my finger, hardening into severity.

During those endless months, it was Berthe who helped us survive. Absorbed in the details of her forthcoming wedding, she remained oblivious to the currents of anger and despair washing through the building. When she was about, Mother’s pride came to the rescue, hiding her air of tragedy behind a smokescreen of platitudes, about the number of guests attending and the choice of food for the wedding feast. And with Pappy, Berthe endlessly discussed here she and Yoav were to live after they were married. Not even Pieter’s abrupt disappearance managed to disturb her equanimity.

‘He’s done it before. He might have stayed on for my wedding though; now Yoav will need to choose another best man.’

And Mother? She cooked, the maids cleaned, and if she was forced by the presence of others in the room to speak to me, she did so. It was my fault, no one else’s, that Pieter had left. Ruth said, were the words she used to whip me with.‘You kept on and on that she was making a mistake.’

Even when Pappy insisted that Pieter was a grown man, old enough to make his own choices in life, it failed to move her.

And why would it?

Only she and I knew the brutal truth, the version she told Pappy no doubt carefully sanitised. And to neither did I reveal the events of that night on the beachhead of Klüsta Island, silenced by a sense of loss that ripped me in two.