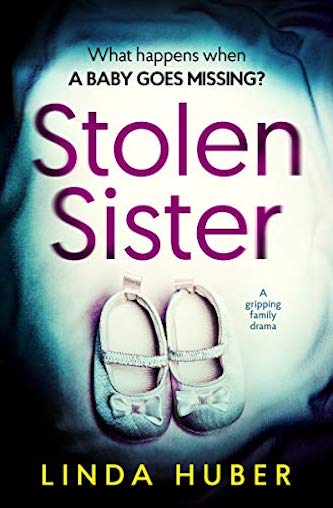 Packed with emotion and suspense, this story is human drama at its finest. Read an excerpt from Stolen Sister by Linda Huber.

Twenty-two years ago, Erin and Vicky’s parents were killed in an explosion.

Now grown up, Erin and Vicky – who have been separated – are unaware they are siblings. But when Vicky is called to her great-aunt’s deathbed, she learns that she isn’t alone after all.

But where is Erin? Vicky’s search begins…

Elsewhere, Christine has problems of her own. In the first week of her new job, she makes a disturbing discovery and is struggling to come to terms with impending motherhood.

Vicky is almost ready to give up her search when an old foster mother calls with shocking news.

What links Vicky and Christine?

Will Vicky ever find her sister?

And can Christine’s baby escape the past that befell her mother?

Smoke. She could smell smoke.

Paula rolled on her side and grabbed the travel alarm. The figures on the clock face were dim in the faint moonlight shining through thin cotton curtains. Half past midnight. She sat up in bed, sniffing – was it smoke? Or just a woodland-after-rain smell? She’d lived in a city all her life; she wasn’t used to country smells. She poked Joe beside her, but he snored on.

Paula thrust the duvet back and swung her legs to the floor. Two steps and she was at the window – maybe a compost heap was smouldering in the hotel grounds? But all seemed quiet; from here in their room above the old coach house she couldn’t even see the main building, just tall trees and the pathway up to the hotel. She stumbled to the door, brushing against the cot at the bottom of the bed, but Erin didn’t stir.

As soon as she stepped onto the landing, Paula knew. That was definitely smoke, a pungent, scorched-wood smell that made her breath catch. Heart thudding, she yelled at Joe to get up, then banged on Sylvie’s door.

No answer came. Paula rattled the handle, surprised when the door opened. ‘Syl!’

The room was empty. Where had Sylvie gone at this time of night? They’d arrived at nine yesterday evening, and she and Joe had crashed out as soon as they’d unpacked and settled Erin down to sleep. Travelling with a six-day-old baby didn’t leave you much energy for extras, and they wanted to be awake at tomorrow’s reunion. Had Sylvie gone up to the bar by herself?

A crackling sound and a muffled bang beneath her had adrenaline surging through Paula’s veins, turning her limbs to so much jelly. Shit, no – that was more than smoke, that was a fire and it was in the building – out, out, they had to get out of here. Her baby… Panting, she fled back to the bedroom, snapping the light switch down as she went, but no light came. The phone? Dead. She scrabbled on the table for the bulk of Joe’s mobile, but it was switched off and she wasn’t familiar enough with it to get it going quickly in the dark. No, no…

‘Joe! Fire, we have to get out!’ Shuddering sobs caught at the words as she shook Joe, then slapped his face until his eyes opened and he jerked upright.

‘Shit!’ He leapt up, then fell back on the bed, coughing.

Paula plucked the baby from the cot and wrapped her in a blanket. She grabbed Joe’s hand and pulled. He shuffled after her, bending double in the hallway as they were met by a waft of acrid smoke bulging up the stairs. The landing flimmered in front of Paula’s eyes as her heart thumped wildly in her throat. That didn’t smell like woodsmoke now, that was – rubber? What was in the underneath room of the coach house?

Joe thudded to his knees behind her, gasping hoarsely and clutching his throat. ‘Need – my inhaler.’

‘We don’t have time. You’ll be better when we’re outside, come on, Joe!’ She pulled at his arm, but he lowered his head, gasping for air.

The baby coughed too, and Paula pressed her mouth against her daughter’s head, whimpering as more bangs came from below, sending a thicker cloud of grey up the stairwell.

She wheeled round, yanking Joe’s arm. ‘Quick! We can climb out the window.’ But Joe wouldn’t move from his place on the floor, and Paula lurched back into the bedroom. Her bowels felt loose with fear and her breath was coming in gasps that weren’t all down to the fume-laden atmosphere she was breathing. She couldn’t lift Joe or even drag him; he was a big man and her body was still weakened from giving birth. Where was his inhaler? Bloody asthma. She put the baby on the bed and rifled through Joe’s pockets, then a movement from outside caught her eye and she dropped the jacket to bang on the window.

It was Sylvie, teetering down the path in those ridiculous heels. So she had gone up to the bar. At that moment Sylvie saw her and stopped dead. Paula fought with the sash window, her arm muscles screaming in protest as it inched upwards and smoke-laden March air rushed into the room.

The baby wailed, and Paula grabbed her, holding her in the window where the air was cleaner.

Sylvie’s hands flew to her mouth and her shoulders jerked up to her ears. Her eyes were round Os as she stared at the lower part of the building, then raced to stand beneath the bedroom window.

‘Paula – throw me the baby! And then get out of there!’