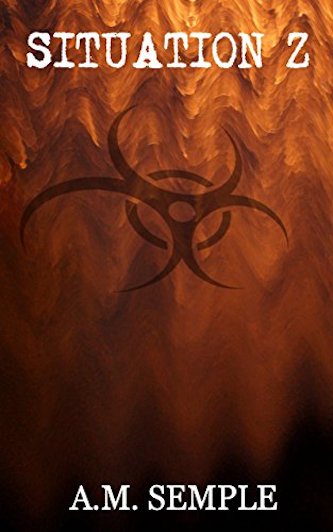 He begins gathering survivors, helping them escape the city and the dead. The world he knew would never be the same again.

The heat is the least of their worries when the dead begin taking over Phoenix. Out of the ashes of destruction rises Wilson.

He begins gathering survivors, helping them escape the city and the dead.

Along the way, the challenges multiply and Wilson’s behavior becomes questionable. Is he trustworthy or will they all end up being someone’s next meal?

Wilson woke up early and was checking the headlines. The phone rang. He knew who it was before he picked it up. “Talk to me, Russell.”

“This is it.” Russell hung up the phone.

Wilson began systematically turning things off and putting last-minute items by the door. He hadn’t wanted to alarm his neighbor, Mrs. Grey, but knew he couldn’t put it off any longer. She’d been under a lot of stress lately with her husband in the hospital. But for that very reason, he felt it best to let her know what was happening.

He cracked the blinds, looking out at the neighborhood. It looked quiet, but he still grabbed his Desert Eagle .45, putting it in his holster. Far more firepower than he would probably need but better safe than sorry. He slipped out the back door and across the Grey’s yard. Her car was in the driveway. That was a good sign.

He slipped inside. It was dark. All the blinds were drawn. It took a minute for his eyes to adjust. There was a strong smell, kind of sweet, but not in a good way. “Mrs. Grey, it’s Wilson.”

A loud thump came from the next room. Wilson felt an odd tingling on the back of his neck. He unfastened the .45 from its holster and flicked off the safety. Another ominous thump broke the silence. He tiptoed in the direction of the noise. It was coming from what looked like a back bedroom. As he got closer, the smell got stronger. He tried the door. The handle turned, but something or someone was up against it. Wilson leaned in and pushed as hard as he could. The door slid open. Mrs. Grey was lying on the floor; her body was at an unnatural angle with her legs. Startled, he holstered his gun. He was about to lean down when she reached out with both hands and grabbed his leg. As he started to pull away, his pant leg lifted, exposing part of his leg. She leaned forward and bit him hard. As he yanked himself free, he looked into her eyes. They were glazed over and vacant. “Holy shit.” He made a hasty retreat, slamming the door behind him. She was one of them. Blood was soaking into his pant leg, and it looked like he wasn’t far behind.

He left the Grey’s, ran across the lawns, threw open his door, and slammed it shut. He rolled up his pant leg and examined the wound. There was a decent amount of blood and a full set of teeth marks.  Thankfully, he knew his first aid and had the bite cleaned and dressed within minutes. He grabbed his phone and dialed.

There was stunned silence on the other end. “You went and checked on your neighbor, didn’t you? Damn it, Wilson…how bad is it? She didn’t take a chunk out of you, did she?”

Wilson sniffed. “Not so bad that I could make a set of dentures, but I can tell which teeth are crooked. I don’t think I’ll be going anywhere for a while. Russell, does everybody turn?”

The brief silence on the other end had Wilson on the edge of his seat. “Well?”

Wilson let out a breath. “I suppose so.”

“Check the area around the bite. Is it changing color?”

He peaked under the bandage. “The skin around it is none too happy and red, about what you’d expect from a normal bite. “

“Well, I’m not going anywhere till we find out.” Wilson was quiet for a minute. “Thanks, Russell.”

“You’re welcome. Now that we have lots of time, tell me what’d she look like?”

“She was scarier than shit. Her eyes were glazed, and she had my blood dripping from her mouth. Let’s just say I wasn’t going to stand around taking pictures.”