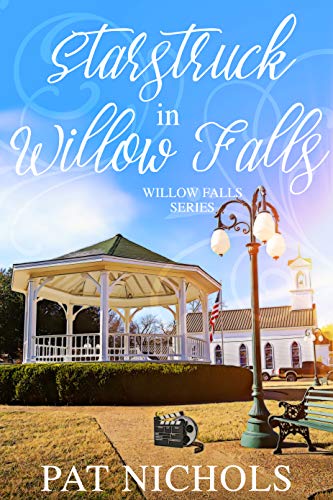 As a Hollywood film crew and famous movie stars swoop into Willow Falls to film a full-length motion picture, the small town’s new normal as a popular North Georgia tourist destination is thrown into chaos.

Rachel Streetman fears her life-long dream to act is drifting into oblivion and leaving behind bitter regret. Weeks away from marrying Charlie Bricker, the manager of the town’s new winery, Rachel wonders if auditioning for a role in the movie will boost her lackluster career or open the door to a lifestyle incompatible with the small-town life she has come to accept.

Rachel’s twin sister, Emily Hayes, also has a dream—to be a famous author. But the release of her debut novel is upstaged by the Hollywood invasion. When she and Rachel accept the job as the director’s liaisons, their patience is stretched to the limit by starstruck residents.

Can these two sisters survive the chaos in Willow Falls and still achieve their dreams?

Rachel Streetman strolled to the gazebo railing and admired the year-old grapevines stretching across acres of rolling hills. She closed her eyes and let her imagination soar. Rows of fans cheered as she appeared on a Broadway stage—the lead in an award-winning play. She pressed her palms together and held her fingertips to her lips, delighting in the thunderous applause, living the dream she’d first envisioned as a preschooler, twenty-eight years earlier.

Her imagination continued to soar until a fluttering sensation akin to a butterfly invasion assailed her chest and plunged her back to reality. Her acting career consisted of a once-a-week performance in a small-town playhouse. Suspended in anonymity. Going nowhere.

In six weeks, she would marry the man she adored, the manager and vintner of his father’s retirement project. Charlie was content to live in this small town two hours north of Atlanta. While she’d grown to care about Willow Falls and the people who lived here, she feared her dream would drift into oblivion and leave behind bitter regret.

Tires crunching the gravel driveway winding from County Road to the winery’s paved parking lot drew Rachel’s attention. Time to put on a happy face. She moved her cooler from the steps and spread a blanket on the gazebo floor, then waved to her identical twin and Mama Sadie—the name they’d given to their birth mother to distinguish her from each of their adoptive mothers.

Emily scurried up the steps and handed Rachel a book. “What do you think?”

“The cover makes me want to dive right in and start reading, and I already know the story.” Rachel embraced her sister. “You’re an honest-to-goodness author. I’m so proud of you.”

Sadie Liles reached up and brushed away a tear. “The day you two were born, I signed papers to give you up for adoption and returned to prison believing I’d never see you again. Then thirty years later, miracle of miracles, we were reunited.” Mama Sadie’s chest puffed out. “Now I know our little family is not only meant to be but loaded with talent. How many mamas can claim two famous daughters?”

“At this point, our fame is limited to Willow Falls,” Emily said.

“You have to start somewhere.” Mama Sadie swept her arm toward the vineyard. “Yesterday, I saw a picture of a Napa Valley vineyard in a travel magazine. I declare it wasn’t as pretty as this view.”

Rachel took in the view, then turned to her new family. “Our wedding will take place right here in the gazebo overlooking the vines.”

Emily settled on the blanket. “I don’t think so.”

Rachel sat beside her. “And why not?”

Emily swept her arm around the gazebo much the same way her mother did toward the vineyard. “I’m guessing you couldn’t squeeze more than a hundred chairs in here.”

“I only ordered seventy invitations. You know not everyone who’s invited will show up.”

Emily wagged a finger in her sister’s direction. “Have you forgotten that you and Charlie are two of the town’s four celebrity darlings?”

“And your point is?”

“If you don’t invite everyone, you’ll break a lot of hearts.”

Rachel’s eyes narrowed to a slit. “What do you mean by everyone?”

“The whole town,” Emily said as if that settled the matter.

Mama Sadie sat cross-legged between her daughters and brushed a lock of hair—tinted to its original auburn color—away from her cheek. “Emily’s right.”

“Yeah, well, maybe Charlie and I should ditch the whole wedding idea.” Rachel removed a pitcher of lemonade and three glasses from the cooler.

Emily thumped her sister’s arm. “Are you experiencing a case of bridal jitters?”

“I wasn’t ten minutes ago.” Rachel filled the glasses. “I decided to hold on to my townhouse. The next time I land a role in an Atlanta play, I’ll need a place to stay. Besides, there are days when I miss big-city anonymity.”

“Heavens to Betsy, honey,” her mother said. “When you move into that gorgeous house up on the hill, you’ll have all the privacy you need.”

Rachel looked into her mother’s eyes, blue-green like the eye on a peacock feather. “Except for all the tourists flocking to the winery and wandering all over the property.”

Emily chuckled. “You might have to enforce a big-city habit and keep your doors locked.”

“Like half the Willow Falls natives are doing now that strangers are roaming the streets,” Rachel said.