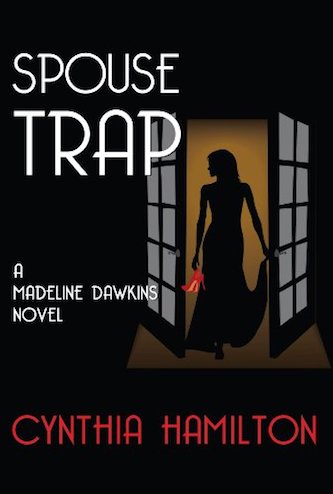 Filled with mind-numbing suspense when getting to the truth may cost Madeline her life!

Imagine you have the perfect life: money, position, influence, an enviable marriage. Then you awake in a hotel room – alone, unclothed, a splitting headache, and no idea how you got there. Welcome to Madeline’s world…

When Steven Ridley comes home in the middle of a weekday and throws a sheaf of damning photos at her, Madeline’s comfortable world collapses in a swirl of blackmail, sabotage, and deceit. Hoping to convince Steven of her innocence, Madeline drives to his office and unwittingly stumbles onto a scene that makes her realize who the real enemy is.

Madeline Ridley opened her eyes with a start. Her mouth was dry and an unpleasant taste lingered on her tongue. Her head felt heavy and it ached as she moved. Reflexively, she flung out an arm, seeking the reassuring comfort of her husband’s body. Instead, she encountered the cool starchiness of unfamiliar bed linens. Where am I?

She sat bolt upright, her heart and head throbbing in unison. Either she had been in the throes of a disorienting dream, or she really was in a strange room. Not knowing where she was terrified her.

The only illumination came from the meager predawn seeping through the French doors at the far end of the room. Her left hand groped the side table for the lamp switch.

The light temporarily blinded her, making her wince. She looked around, quickly searching for any object that would ground her to her life. She was not in either of her bedrooms, or any of the guest rooms. She sat tentatively on the edge of the bed, breathing hard. By the furnishings and the layout she figured she was in a hotel room. But where?

Grabbing the phone, she recognized the familiar logo of The Edgecliff Hotel across the top. The Edgecliff; right. Steven and I were here for the fundraiser, she thought. Okay. This recollection made her feel less shaky, but it didn’t explain how she’d ended up in this room. Did we drink too much and decide to get a room?

She glanced at the other side of the bed. The sheets were flung back, indicating it had been occupied at some point.

“Steven?” she called out. “Steven?” As she got up from the bed, she caught sight of the dress she’d worn to the ball. She reached for it and the bra and panties she had been wearing only hours earlier fell to the floor. She stooped to retrieve them, discovering the dainty lace articles were in tatters.

“Steven!” she cried out, trembling as she wove her way to the bathroom on unsteady feet. “Steven?” She flipped on the light switch, and squinting through the glare, found the room empty. She backed out into the hallway, checking the closets for clues of her predicament.

Why am I in a room at The Edgecliff? she asked of her reflection in the hall mirror. All she saw was tousled hair, smudged lipstick and bloodshot eyes. Her hand traveled down the side of her neck to her clavicle, where three bright red scratches stretched toward her left breast. She turned away from the mirror, panting as she forced herself to recall how she had gotten there. And whose nails had made those marks on her.

Images of last evening began filtering across her mind’s eye. She recalled stepping out of the Maserati at the hotel entrance and walking with Steven to the main ballroom. He had been in a foul mood; she clearly remembered that. She could hear the harsh tone in his voice, could see the anger in his eyes as he laid into her. What was he mad about? Madeline shook her head. She couldn’t figure it out.

But she did recollect walking fast to catch up with him as he stormed off toward the lobby—him turning around, calling her a filthy whore under his breath. She remembered the sting of tears in her eyes and the feeling of disbelief as she watched him drive off, leaving her there on the curb.

With shaking hands, Madeline struggled into the red lace Valentino gown. She recalled the dark-haired man coming toward her…two glasses of champagne in his hands. His consoling words…Don’t worry, I’ll make sure you get home…

Madeline’s throat closed, making it impossible to breathe. Her eyes teared up, but the cries couldn’t escape. This did not happen! This did not happen! she thought, though it was obvious she had been in a hotel room with someone, and the odds were it wasn’t her husband.

She sank into a chair as she pleaded with herself to remember how she had gotten to this room. Panic set in. Her hands flew to her earlobes; she went limp with relief when she felt the teardrop diamond earrings still in place. But where were her diamond watch and bracelet? And her wedding ring?

She frantically looked around and spotted her handbag, itself a pricy investment. She opened it hastily and found her jewelry, along with her cell phone and credit cards. She had not been robbed, at least. But what happened? Who had been here with her?

As she looked for cash in her tiny bag, she discovered the key to the beach house. She had put it in at the last minute, just in case she and Steven drank too much and didn’t want to drive back up the hill. She clutched the key tightly in her hand; it was her salvation.

She found her shoes and carried them in one hand and hiked up her gown with the other. With the first tinges of daybreak coloring the sky, she crept out the French doors and followed the pathway. She crossed out of The Edgecliff grounds and headed down the steps to the sand. In less than ten minutes, she had made it to the beach house without seeing a soul.

Cynthia Hamilton has recently embarked on a mystery series and has become hooked on working in this genre. The author does extensive research for all her books and her latest are no exception. To gear up for Spouse Trap, the first book in the series, she took a detective course and spent countless hours investigating Guam, “virtually” living there so she could navigate her protagonist through a quickie divorce, with a little mayhem on the side.

Spouse Trap, set in her hometown of Santa Barbara, California, is the prequel to the series. It tells the story of how Madeline Ridley becomes Madeline Dawkins, and the dual careers she forges after going to hell and back. It was released in February 2013 and has received very enthusiastic feedback.

Because of what she put her heroine through in the first installment, the author realized Madeline needed to have martial arts training in the subsequent books. To that end, she has taken up karate, a discipline she has fallen in love with – so much so, she incorporated her instructor into her latest book.

The author’s other works include A High Price to Pay: A Madeline Dawkins Novel, Lucky at Love, Alligators in the Trees, Golden State, and her first non-fiction Once Upon a Lyme… which chronicles the onset of a mysterious illness and the unexpected dividend of becoming a writer. To learn more about the author and to sign up for updates to the series, please visit cynthiahamiltonbooks.com.