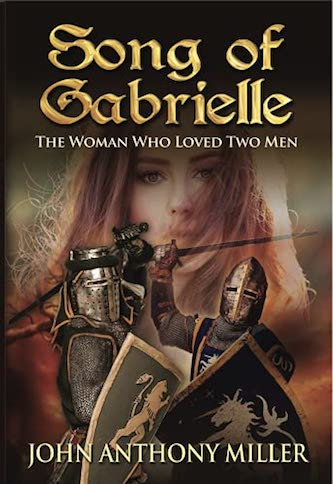 Riddled with hexes, potions, and spells, bound by love and honor, the story defines the heart and all it holds, as well as the forces that try to control it.

Lady Gabrielle is captured at a French convent and taken to an English castle, a prize for Sir Michael Marston.

Her lover, Montague of Rouen, allies with English barons plotting to overthrow their king. As England drifts into civil war, Montague attacks.

Minerva, a powerful witch, casts a spell on Marston and Gabrielle, joining the two as one.

Montague fights with passion never seen before or since, and the castle begins to fall.

Wrought with doubt, defined by desire, Gabrielle is forced to choose.

With whom will she spend eternity: Sir Michael Marston or Montague of Rouen?

A romance thread through a world of war, fantasy fused with fiction, Song of Gabrielle is the tale of a woman who loves two men.

As the sun sank into the sea, darkness draped the Normandy coast. Black clouds swollen with moisture rolled across the cliffs that thrust upward from the shore, promising rain or sleet or whatever God might bring to a land ravaged by war.

I shifted the satchels upon my back, their weight making me weary. One held my belongings, a tunic more tattered than that which I wore, a skin of water that was close to dry, and fragments of verse from books long forgotten, while the other housed the lute I used to earn my keep as I traveled town to town, telling tales and singing songs. I eyed the storm as it came ashore and the terrain that sprawled behind me, ensuring that I was alone on the ridge, safe from the bands of English soldiers who roved the countryside. A sharp wind whipped up from the sea, and I pulled my cloak about my neck, trying to keep warm. I had to seek shelter to avoid a night that might kill as easily as the enemy whom I now tried to avoid.

I walked along a dirt lane worn by wagon wheels, indented by horses’ hooves, as it rose and fell with the cliffs that rimmed the Normandy coast. I scanned all directions in search of shelter, if only for rocks or trees to shield me from the wind and rain. I could see a village to the south, the church steeple announcing the town it anchored, still an hour or more away. But as I came to the top of a crest, I saw a cottage that hugged the coast, a convent sitting beside it.

I quickened my pace, my bags heavier, my legs more tired with each step. A few drops of rain began to fall, a cold drizzle that bit my hands and face, and I turned away from the wind and looked to the ground, readjusting the scarf about my head to protect it. The road wound along the crest of the cliff to the convent beyond—the cottage closer to the edge that dropped dramatically down to the waves. I approached the wall that enclosed the convent and saw a cemetery stretching from the lane that led to the cottage to the edge of the cliff that guarded the sea.

My gaze rested on the graveyard, so silent in the night, and even though the weather warned me, I couldn’t help seeing whose souls it might contain. I knew I could linger but a moment more. The graves were marked with white crosses, some askew, pummeled by the wind. I looked at the first and read the name: Sister Eloise Barbette. The next read Sister Lorraine de Fay. And a larger cross bore the name of The Reverend Mother Fae Le Vanier. I then saw amarble headstone that sat facing the sea, so unlike those around it, and I couldn’t resist seeing who its owner might be. I stopped and stood before it, the etched letters weathered to shallow relief by the passage of so many years. An arched recess in the top of the stone held an aged chalice, protected from the wind and rain and hidden from the prying eyes of man, a prized possession from the past that now seemed like a trinket used only to garnish a grave. I looked at the epitaph, aged by time: Lady Gabrielle, the woman who loved two men.

The rain fell harder. I hurried back to the lane and approached the convent wall. An iron gate hung on one hinge, broken beyond repair, and, as I glanced into the courtyard, I saw a man, stout with but a fringe of hair remaining on his head, standing at an open door. A wooden sign hung above him: The Boars Head Inn.

“Who goes there?” the man asked.

I realized the convent no longer existed, and an inn now stood in its place.

“Jean Antoine,” I said. “Troubadour and son of a miller. Have you lodging for the night?”

“My prayers have been answered,” the man said as he waved me toward the door. “Please come in, I beg of you.”

Please click HERE to find Song of Gabrielle on Amazon.