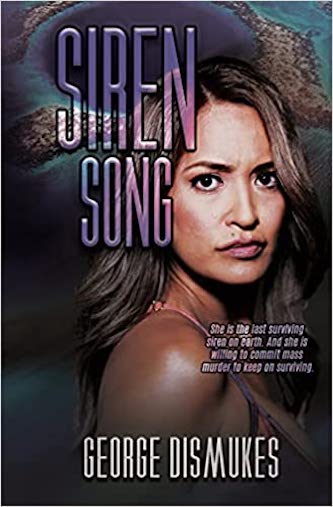 She is the last surviving siren on earth. And she is willing to commit mass murder to keep on surviving.

She has lived for almost two thousand years. But now, she fears for her existence. More and more, sport scuba divers are taking dive trips to The Great Blue Hole of The Caribbean, unaware that “The Hole” is the siren’s lair.

She hatches a plan.

In her mind, if she can kill everyone aboard a dive boat at The Great Blue Hole, she will create fear of the location, and visitors will stay away.

Morphed as a beautiful woman, she joins a dive safari group along the Texas coast that is bound for Lighthouse Reef and The Great Blue Hole.

She feels that by working ‘from the inside’ she can easily kill every person on board, one at a time.

Will her plan work?

The main fly in the ointment is none other than a twelve-year-old boy.

Can he stop her murderous fury?

Captain Hughes was silent for several moments. He took a deep drink of his beer, then began to tell a story. “When I was a kid in Corpus Christ, there was a drive-in theatre on Port Avenue called ‘The Buccaneer.’ I’ll never forget it because there was a huge mural painting on the back side of the theatre screen. It was a scene of a beautiful mermaid sitting on a rock in the middle of Corpus Christi Bay. She was drinking from a pink conch shell. I was always captivated by that painting. Hot damn, it was beautiful! Then, when I was barely a teenager, we were making an early morning run out to a reef that my dad liked where there were always lots of trout. I was sitting alone on the bow of the boat, just feeling the wind against me. It’s kind of quiet there, you know. There’s a special feeling. Anyway, I was looking around, enjoying the way the early morning sun was glistening across the water. Then, just for a split second, I thought, ‘just for a split second,’ understand, that I saw that very same scene with the mermaid, but in real life.”

“You mean you saw an actual mermaid?” James Harmon asked.

“Ah… It was so quick. Just a momentary glance. A mirage. I’m sure it wasn’t real, but I’ve gotta tell you, it was goose-bump time.”

“Wow! That’s a neat story,” James said. “So, do you believe in Sirens… or mermaids?”

Angie eyed the Captain. “Doesn’t seem like the question is so difficult. It’s the answer, perhaps, that is difficult. Eh, Captain?”

“There’s a lot of fables about the sea,” Gordon says, starting to sound a little defensive. “Old sailors must not have had much to do on those long nights aboard wind powered ships except to sit around and dream up bullshit. The problem came to be that a lot of that bullshit wound up in books. That gave the bullshit credibility which it didn’t deserve long ago, doesn’t deserve today. Whatever.”

“Perhaps. But what James asked about is you. Specifically, you! Do you believe in mermaids, sirens, whatever?” Angie was having fun, pressing the captain and watching him begin to squirm. This kind of thing was her specialty, one of her finest talents.

“Not sure,” Captain Hughes said in a slightly louder voice, now a little more defensively. “The jury is still out.”

“Jury? What jury? It was just a conversational question. You know, having fun.”

“Look, the answer is, I don’t know. I admit, I’ve experienced a couple of strange things out there during my lifetime. You know, you know… You know, well, the ancient Greeks, and they weren’t the only ones, had all kinds of tales about sirens and mermaids. Some people say it was just myth. But what was the true origin of myth? Seems like there had to be some basis in fact for it somewhere along the line. What was the reason for any of it? Where did it start? We just don’t know. You know? Let’s talk about something else. How’s that cake, James?”

“Good!” James said as he took another bite. ‘Some Come Up Barely Alive’. I like that. It’s a good one!”

Several people at the table looked at one another and wondered at Captain Hughes’ strange reaction. After all, it was just dinner conversation. But the subject had unexpectedly rattled the captain.

Angie decided to change the subject, and justifiably so. “Well I think it’s time we talked about the trip. Is everyone geared up and ready for the big dive safari to The Great Blue Hole?”

Indeed, that was the ‘other’ reason for this gathering; a bon voyage party. Everyone at this table would be aboard Siren Song in one capacity or another for a long trip across the Gulf and into the Caribbean to a place located off the coast of Belize known as The Great Blue Hole.

“The Hole” was located inside Lighthouse Reef, a twenty two mile long reef located seventy five miles off of the coast. The Hole was an ancient cave, now underwater, a thousand feet across and four hundred plus feet deep. At some point in antiquity, the roof had caved in, exposing The Hole to daylight, although ‘daylight’ was now below water. It was a popular dive spot for those with the financial means and imagination to get there. Captain Hughes was one of the few charter captains anywhere to organize dive parties for the long trip.

Why not station his boat in Belize and fly people in there who wanted to go to The Great Blue Hole? Because, “Getting there is half the fun!” Siren Song was outfitted specifically for divers, up to and including a compressor for refilling scuba tanks. Such equipment would only be