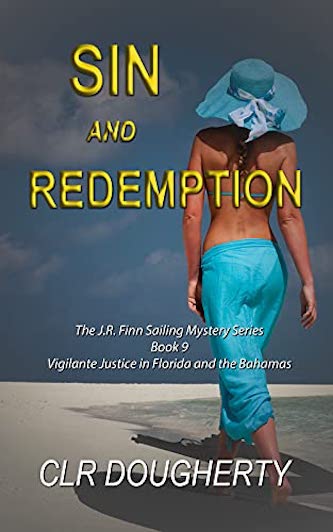 A story that could be ripped from today’s headlines, a brilliantly told tale of dissension, revenge, and a devastating threat to democracy.

His target in his sights, Finn is squeezing the trigger when his intended victim collapses. An unknown sniper has shot the target. Finn and his partner, Mary O’Brien, go looking for the other sniper.

During their search, Mary learns that a former associate wants to hire her. Until Mary verifies the man’s identity, she believes he died years before in a drug war in the Bahamas.

Once she’s in touch with him, he tries to recruit her to join an assassination squad.

Suspicious of the timing, Finn and Mary seek a connection between the two events. What they learn has dire implications for the survival of democracy in the U.S.

Perfect for fans of tropical thrillers, Sin and Redemption will keep you turning pages until the end.

Concealed in the undergrowth near a large clearing in the southeast Georgia pine forest, I watched the warm-up acts for the rally as I waited for my target to arrive. Jeff Lee was an enigma. Nobody knew where he came from or who he was, although his rabid followers thought they did. They were one hundred percent taken in by his fabricated history.

Supposedly born in a run-down shack in an unnamed hollow in the hills of Eastern Kentucky, Beauregard Jefferson Lee was a decorated combat veteran. He was also the only child of a sickly, meth-addicted single mother who died alone in her backwoods shack when Jeff was in his early teens. A big, rough kid, Lee left all that behind, lying about his age to join the Army.

According to military records, Lee served with distinction. He was a soldier’s soldier. Captured by ISIS while on a covert mission in Yemen, he was featured in many ISIS propaganda videos. Battered but unbroken, Lee refused to confess to the crimes against humanity he allegedly committed on behalf of the U.S. government. Despite a lengthy period of detention and torture, Lee eventually escaped and made his way home, or so his fabricated biography said. As attractive as that history was to his followers, none of it was true.

Lee’s bogus biography was a compelling story, but my client and I weren’t sure who wrote it, or who was intended to benefit from it. One thing we did know, though, was that Lee was taking advantage of his followers. Mostly honest, hardworking people who felt abandoned by their elected government, Lee’s fans were being manipulated by someone for reasons unknown to us.

I watched the crowd of several hundred ragged, heavily armed members of the Patriot Militia for Secession. Clad in camouflage from discount sporting goods stores, many were wearing Kevlar vests. With banners and clothing bearing the slogans of the far right, they were a slovenly bunch. Most sported unkempt beards and shaved heads covered with stocking caps bearing various right-wing insignia.

Their excitement reached a fever pitch as a mud-encrusted, flag-bedecked red pickup truck came into view. They cheered as the truck worked its way up to the flatbed trailer that served as the stage. It was almost showtime.

I laid aside my binoculars and picked up my scoped rifle. The shot wouldn’t be challenging. There was no wind; the distance to the stage was three hundred yards with a drop of about 30 feet from my position.

The setup was perfect; I sighted in the rifle yesterday for exactly these conditions. A mid-priced, bolt action hunting rifle with a commercially available scope, it was chambered for .308 Winchester rounds. It was an unremarkable weapon, typical of the kind that would be found hanging in the rear windows of half the pickup trucks in this part of the country.

The only anomaly was the suppressor affixed to the muzzle, but even that was an off-the-shelf item. Nothing special, the rifle was a throwaway with the serial number removed. There would be no way to trace the weapon. I would leave it behind as I melted away through the swampy woods at the bottom of the gradual slope behind me.

The red pickup truck stopped a few feet from the stairs leading up to the stage. Getting out of the truck, Lee mounted the stage and took up a position at the podium, raising both arms and gesturing to encourage the welcoming roar of the crowd.

I lifted the rifle and settled into a prone position, centering the scope’s crosshairs on Lee’s face. I took a comfortable breath and let it out, watching the rise and fall of the crosshairs as I took up the slack in the trigger. Another breath, and I began to squeeze the trigger as I exhaled.

Before I fired, Lee pitched violently forward, spinning to his right as he disappeared from my scope. As he was falling, I heard the crack of a high-powered rifle.

I put down my own rifle and picked up my binoculars. Lee was face-down beside the podium, surrounded by six men who formed a wall of flesh around him. Though they looked like rabble, they moved like well-trained troops, scanning the crowd, holding their assault rifles at the ready.

Please click HERE to find Sin and Redemption on Amazon.