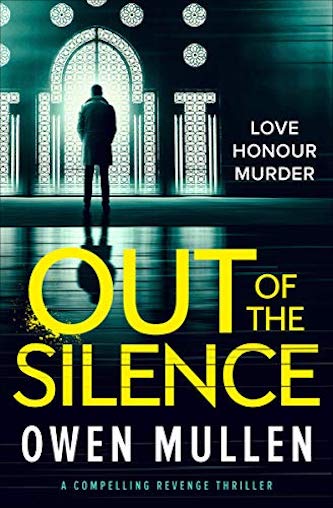 A British journalist gets embroiled in a shadowy world of revenge and honor killings in this international thriller.

When British investigative reporter Ralph Buchanan is sent to Pakistan, he figures his best days are behind him. But he’s about to embark on a story that will change his life forever.

In the Punjab region, Dr. Simone Jasnin hears an abused woman’s harrowing story just before she dies. Afra’s tale of sadistic cruelty is all too common in this region of the world.

But Dr. Jasnin is determined not to let Afra’s story die with her—and she goes to Buchanan for help exposing the injustice.

Seven years later, members of a prominent Pakistani family are being brutally murdered, one by one.

The only clues the hand-carved wooden bangles left at the scene of each crime.

As the list of suspects grows and authorities come up short, Buchanan realizes the solution to the deadly riddle might be closer to home than he ever thought possible.

It’s a story that could put him back on top…but at what cost?

Sampler: Out of Silence

Still no answer from Simone. I left a message and replaced the receiver.

The time for games had passed. I needed to talk to her and find out what was going on. Already I was stronger than when we’d last met. Strong enough not to get involved in something bad? Yes, I believed I was. Strong enough to stand in the way of a woman bent on changing the world? I doubted it. The conversation with Dan Meiklejohn had come out of the blue, his information called up more possibilities than I could handle. And I didn’t kid myself: I was in love with the dark-haired doctor. Loved her commitment, her passion, her refusal of the easier options she might have chosen for her life; her eyes, her smile, all of her.

But, if underneath was a cold-hearted murderer bringing an awful kind of justice to those she believed deserved it, what then? What if that was the real Simone? A whisky thought crossed my mind. I resisted it and tried to find some clarity. I was still a journalist, what were the facts? Not theories or suspicions – the facts. What did I actually know? That question underlined a sad truth; avoiding ex-wives hadn’t prevented Dan Meiklejohn from keeping his oar in the water. He had contacts. I had none. The police would refer me to a statement, and I’d have…

The same story as everybody else.

The reporter reappeared, a lifetime of experience standing at my shoulder. I fished paper from a drawer and drew up a Q and A. All I could lay my hands on was a pencil that needed sharpening; it would do.

Question: What crimes had been committed?

Answer: Two members of the Dilawar Hussein family, Zamir, and Firdos, had been brutally murdered and the warehouse destroyed.

Question: What was unusual about the crimes?

Answer: The violence. Thirty-three stab wounds and castration by acid, and a carved ebony bangle found beside each body.

Question: Why was so much rage involved, especially in the first murder?

Answer: Because the murders weren’t random slayings? They were personal? The motive was revenge?

Question: Revenge for what?

Question: Why had the killer left a bangle at each crime scene?

Answer: A warning. They said you know who I am.

Question: What was the significance?

Answer: Afra had been married to the eldest son, Quasim, for seven years and had often worn the jewellery. The family would recognise it.

I paused. So far there was nothing to connect Simone to anything.

The ‘buts’ were easy to find.

Question: What connection did Simone have with that family?

Answer: Afra told Simone about her life with them.

Answer: She was disturbed by the scenes at the rally, talked wild talk about not being a spectator and wars needing soldiers. I had been unable to contact her in almost two weeks, during the time the murders were committed.

If only I could speak to her, find out where she’d been and what she’d been doing. I’d made mistakes in my life, but I’d called it right plenty of times. I ran through the Q and A again. Something was off. On the third read through I saw it right in front of me. So often the Q and A showed up a discrepancy in the evidence or the timeline or, in this case, an assumption.

And there it was, plain as day. The answer to number ten wasn’t correct. I read it again.

Wrong! So wrong it made him gasp.

The only one apart from her…

Two sets: Afra had one; the other was on the desk of the businessman of the year. Jameel Akhtar Hafeez.

Please click HERE to find Out of Silence on Amazon.