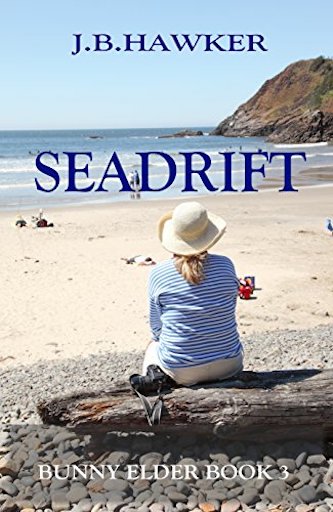 Not your typical love story or mystery novel. Instead, it is sprinkled with a variety of elements–murder, suspense, romance, and even a little humor.

Life’s been a beach for Bunny Elder since her pastor husband’s murder, so where better to try to begin a new life than a small tourist town on the beautiful Oregon Coast?

A midlife identity crisis prompts a career change and this former pastor’s wife steps into uncharted waters attempting to become a freelance writer. She hopes the sun, sand, and sea will inspire and heal.

New career, new friends, and a possible new romance make life by the seaside seem idyllic until an innocent walk on the beach introduces Bunny to the world of International criminals and the horrific reality of human trafficking.

Bunny took the lunch she had packed that morning out to the picnic table behind the cabin where she could enjoy the warm sunshine on her back and hear the breeze rattling the branches of the trees.

The scent of sun-warmed pine and fir needles reminded her of fresh-baked soda crackers. That fragrance always recalled the rare summer camping trips of her youth.

A sweet little pine squirrel chirped at her as she set out her food, then clambered farther up the tree where it sat watching her with its orange-colored chest contrasted against the dark greens of the pines.

She bit eagerly into her crunchy sandwich of tuna, black olives and chopped dill pickle tucked into a whole wheat pita pocket ruffled with a crisp kale leaf. As she enjoyed her lunch Bunny reflected on the past few months and the remarkable change that had taken place in her life.

Not long ago she was facing a dreary future as companion to her older sister, Linda … two lonely widows marking time together dwelling on memories of the past and awaiting the blessed release of death.

While she was pretty sure she still had the option of going to live with her first husband, Max…the man she thought she still loved…the prospect had been tarnished by some unpleasant revelations about their past relationship.

Even so, Bunny had been sorely tempted to give in to Max’s urgings and join him in Houston, especially when he told her he had joined a church there and was seeking a closer walk with God.

It had been a conflict of beliefs that caused the failure of their brief reconciliation following the death of her second husband, Eustace, but it would have been so easy to slip into a life with Max, if only he had not forced her to take a good hard look at herself when their paths crossed unexpectedly in Italy.

They were accidentally caught up in a desperate situation which inspired Max, uncharacteristically, to talk about his feelings. His disclosures forced Bunny to see herself in a harsher and less flattering light than she was used to.

She was compelled to face the fact she’d lived most of her life without real goals, filtering everything through her own fantasies and reacting only as necessary to whatever bits of reality intruded into her world. She had been trying to please others, but without sensitivity to their needs, or to her own.

Bunny had become a detached observer of her own life. She’d spent so much time inside her own head she’d lost touch with her heart.

Now, she wanted to learn who she was with her eyes wide open and only herself and God to please.

She had been a pastor’s wife for many years before her second husband’s death and she had molded her life to the role without a second’s hesitation. She never even tried to tailor the part she played to fit her own personality.

Eustace’s murder left her adrift with no income and no identity.

In the few years since, she had been peeling back the people-pleasing layers in an attempt to find the real Bunny. She feared joining Max now would derail her journey of self-discovery.

He was not happy when she told him of her plan to move to Oregon to try to make a living as a writer. Max mocked her need to “find herself” like some acolyte of Betty Freidan and Gloria Steinem of the 1960’s. He accused her of trying to live a latter-day sequel to “Alice Doesn’t Live Here Anymore”.

Bunny tried to make him understand her desire to get to know herself didn’t mean she wanted to break off their relationship. She was hoping they would be able to come back together eventually as whole individuals and have a richer, more honest life together, if only he was willing to give her a chance.

The last time they spoke Bunny invited Max to come for a visit. He was not very gracious in his refusal to come to the cold and damp Oregon coast. She knew Max preferred warmer climates, but she still felt that this was an excuse rather than a reason.

It was disappointing, but she remained resolute in her decision to get to know who she was when she wasn’t being a distorted mirror of someone else’s desires and expectations. If it meant Max was out of her life again, so be it.