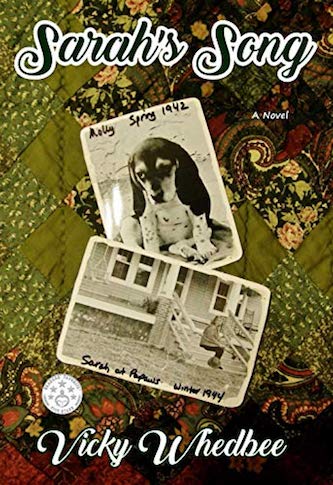 Beautifully written. It touches the heart and stirs emotions.

For most everyone, there is only work, and possibly church, if there’s one nearby. People rise before the sun is up, work hard, go to bed early, and rest in church on Sunday.

Little chance for much else to happen. Right?

So, why would keeping one little secret for over sixteen years be so important?

What could possibly have happened that could change the lives of so many people, if the secret were to be revealed?

There are only three people alive that know the answer to that question.

“D-Did C-Clyde get r-rid of all of th-them p-pups h-he had?” he asked Oppy. His stuttering always seemed to get a little worse when he was worried or upset.

“No, he still had one, last I heard. Cute little thing, too. That sign was just worryin me to death, cause it kept fallin down, so I just got rid of it. Figured everybody done knew he had em anyhow.”

Samuel breathed a sigh of relief. He hoped it was still there by the time they got there. Just in case though, he decided to let them all get a moon pie and a dope. He figured the young’uns were probly getting hungry, havin missed dinner already, and still havin to go out to the Wilkens’ place before they could get home for supper, it would hold them over.

“This is turnin outta be the best day ever!” Tommy exclaimed, while trying to make his choice. He finally decided on a chocolate moon pie and R.C. Cola.

When the girls finished picking out theirs, Samuel grabbed a dope for himself, telling Caleb to get himself one too, and counted out another forty five cents to pay Oppy.

After he paid up, Oppy asked, “You’ens want a little poke to put yer treats in?” she asked, as she put the money in the till.

Faith cried out, “I do!” excited to have her very own poke.

Oppy slipped Faith’s moon pie into the paper sack, folded it over at the top, and handed it down to her, who took it and clutched it to her chest, beaming.

“We’d b-better light out, if’n we w-want that p-puppy,” Papaw announced, nodding in thanks to Oppy, for making Faith so happy.

That prompted everyone to load up real quick. They waved goodbye to Oppy and Caleb as they pulled off.

“You reckon we’ll get there in time Papaw?” Tommy asked with his mouth full of moon pie, barely able to conceal his excitement.

Sarah answered, “Don’t talk with your mouth full, Tommy, and I expect we will, if it’s meant to be!”

Tommy swallowed before speaking again. “It’s meant ta be. I jes know it. This day’s been too good fer it not ta be meant ta be!”

Samuel and Sarah exchanged a glance, both happy to see Tommy so excited, and both hoping he was right. The kids turned their attention back to their treats, daydreaming of puppies, while Samuel and Sarah enjoyed the peaceful ride.

It had rained the night before and washed everything clean. There was a pleasant breeze, and the rolling fields were aglow in vibrant shades of green. Sarah vaguely remembered going to Knoxville with her mama and daddy once, to visit with some relatives, but she couldn’t remember much about what it looked like. She just couldn’t imagine it could be any prettier than Hurricane Holler. She wondered why it was called that, but before she could ask her papaw, they arrived at the Wilkins’ place.

They waited in the wagon while Samuel went to find Clyde and inquire about the pup. Sarah overheard Tommy whispering, “It’s meant to be, it’s meant to be…” until they saw Mr. Wilkins and Papaw walking back to them with no pup in sight. Tommy went silent as they made their way closer, and Sarah’s heart about broke for him, until Mr. Wilkins gave a whistle and a little beagle puppy came bouncing out from around the side of the barn.

Tommy let out a squeal, and the girls clapped their hands, when he bounded out of the wagon to meet the puppy mid way. It was white with black and brown spots with long floppy tan ears. Her whole butt wiggled when she wagged her tail, as her and Tommy got acquainted.

Mr. Wilkins greeted Sarah, and explained that the puppy was the runt of the litter and he’d been worried that no one was going to want her.

Sarah looked at Tommy rolling around with the little misfit. “I don’t think you’ll have to worry about it anymore. It looks like it was meant to be!”

She said a silent prayer of thanks. She hadn’t seen Tommy this happy in a long time. She climbed down from the wagon, and helping Aubry and Faith down, they went to meet their new puppy, while Papaw and Mr. Wilkins finished visiting.

Vicky Whedbee was born and raised in Daytona Beach, Florida, where she resided until her 40’s when she relocated to San Mateo, Florida, where she currently resides with her husband. An avid reader, she wrote her first novel over a period of years as a labor of love and fulfillment of a life long dream that began with the encouragement of her Engish teacher in high school.

With a diagnosis of cancer for her dad, she decided to become an independent author and published her novel on her own in order to present a finished product to her father before his demise. She was in the process of reading said novel, Things He Hadn’t Told Her, to him at the time of his passing.

She wrote her second novel Sarah’s Song, which was a collaboration with her father set in the time of his childhood in the rural Appalachian mountains, with notes taken prior to his demise. Both books have been met with stellar 5-STAR reviews on Amazon & Goodreads, as well as awarded the 5-star review seal from Reader’s Favorite.

After numerous requests, she wrote a sequel to Sarah’s Song, titled Sarah’s Home, which could also be read as a stand-alone. It, too, is being received with love and 5-STAR reviews.

She is currently working on her next novel.