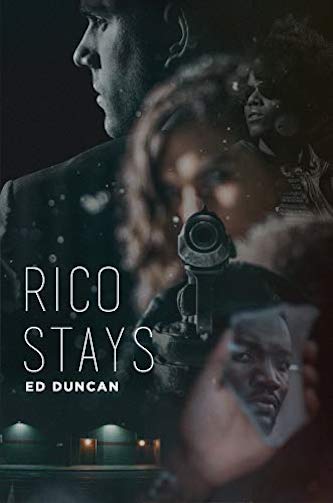 Before you know it, bullets are flying. And from there, the story is off and running, and it doesn’t let up until the very end.

After enforcer Richard “Rico” Sanders stepped in to protect his girlfriend from a local mob boss’s hot-headed nephew, all hell broke loose.

When the smoke cleared, the nephew had vanished and three goons lay dying where they’d stood.

Fighting for his life, Rico was alive but gravely wounded.

Out of the hospital but not fully recovered, he needed a place to crash – a place where he wouldn’t be found. A place like the cabin owned by lawyer Paul Elliott, whose life Rico had saved more than once.

Trouble was, Paul’s girlfriend hadn’t forgotten Rico’s dark history – or Paul’s fascination with him. Vengeful killers would soon be coming for him.

The only question was whether he would be ready to face them.

It was eerily quiet but unless the wind was howling or they were listening to the radio, it was always eerily quiet. Rico sat back in his chair and closed his eyes. They had been closed for only a minute when he heard a faint rustling sound outside. He slowly opened his eyes and, careful not to make a sound, sat up straight. At first, he thought what he’d heard was a squirrel or a rabbit, but in a way he couldn’t quite put his finger on, this sound was different. All he could discern was that it was coming from the front of the cabin, and it was getting closer, not rapidly but steadily.

Oblivious, Jean was checking on the baked potatoes in the oven. After closing the door, she casually turned toward Rico. She opened her mouth to say something, but he stopped her by bringing an index finger to his lips.

He closed his eyes for a moment, rapidly thinking. ‘Where is my Sig?’ Suddenly, his eyes opened wide. ‘Shit! In the bedroom on the dresser.’ Lulled into a false sense of security by the isolation and serenity of the country, he had gotten careless. Any other time (save for the time he had decided to leave his .45 at home when he went to pick up Jean and Koblentz from the supermarket), his Sig would never have been out of eyesight, even when he was alone in his own apartment.

Silently, he quickly weighed his options. He could hobble in to the bedroom himself, but that would mean crossing the width of the kitchen, which he calculated would take about five to seven steps; then turning in to the hall and taking perhaps fifteen more steps to get to the bedroom; and finally taking another five steps or so before he reached the dresser. And then he would have to retrace his steps to get back to the entrance to the kitchen, before proceeding around five to seven steps past it to reach the front door and confront the approaching sound, which an instant earlier he had recognized as footsteps.

No, Jean would have to get the gun and bring it back to him before the footsteps reached the front door, but sooner if possible, in case whoever was out there decided to start shooting before he reached the door. Soon that person would be close enough to hear his voice, but not yet.

“Get my piece,” he said, urgently, his voice barely above a whisper.

She had heard him but for some reason, eyes questioning, she hesitated. ‘Jean, this is no time to freeze up on me.’ She stared at him and started to ask something, but Rico anticipated her question and answered it.

“In the bedroom on the dresser,” he whispered.

She dashed toward the bedroom. Meanwhile, Rico heard the footsteps growing louder. He sprang from his chair as quickly as he could and, after three sizeable steps that taxed his recovering leg, he reached the wall and flipped the switch, turning off the kitchen light.

Jean made it to the bedroom as the kitchen light died. She had only suspected the reason for Rico’s alarm, but now she knew; she could hear the footsteps, too. From the doorway she saw the Sig resting inside Rico’s shoulder holster, lying on the dresser.

She made it to the dresser in three giant strides. The barrel of the gun was pointing away from her, its handle exposed inside the holster, which rested on top of the elastic strap. ‘Should I grab the holster or take the gun out?’ she wondered, her brain whirling. She made the decision in the blink of an eye. She dropped her left hand on the holster to keep it from moving while she simultaneously grabbed the handle of the .45 and jerked it out of the holster. It slid out like a buttered knife between two hotcakes.

Meanwhile, the footsteps continued to grow steadily louder, getting closer with every passing second.

After Rico flipped the switch in the kitchen, leaving his cane behind, he hopped across the kitchen floor and into the hall to await Jean’s return. She exited the bedroom a second later, turned, and saw Rico waiting for her, while his eyes focused on the front door. Hearing her enter the hall, he turned and saw her racing toward him.

Now, the footsteps outside reached the front porch.

Then there was a knock at the door.

She did, underhanded, from fifteen feet away. But she didn’t have a chance to cradle the .45 in the palm of her hand and gently loft it like a softball. Instead, grasping the handle between her thumb and outstretched fingers, she launched it forward using the same motion she would if she were rolling a bowling ball, but with less force. Unfortunately, that caused the gun to rotate end over end like a hatchet thrown at a target at a carnival. As the .45 traveled toward Rico, turning end over end, he deftly timed the revolutions, caught it by the handle in his right hand, and in the same motion, whirled and pointed it toward the door.