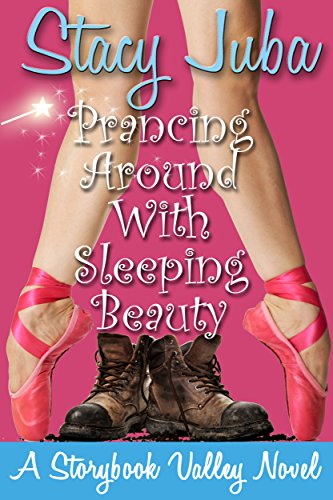 Kyle wants to change her whole life, but Rory doesn’t like the stakes. After all, princesses are the ones who get the happy endings. . .aren’t they?

This Sleeping Beauty isn’t sure she wants to wake up…

When she meets Kyle, he’s impulsive, persistent, and her exact opposite. He’s pushing her to tango way past her comfort zone and keeping Rory on her toes more than twenty years of dance teachers ever had.

Unfortunately, he’s the grandson of her family’s archrival and she doesn’t want to disappoint them.

After all, her parents imagine her as a proper princess – hence her namesake Aurora, AKA Sleeping Beauty.

Complicating matters, Rory’s also dealing with a surgeon boyfriend who’s perfect for her (sort of), an obnoxious boss, and desperate dance moms.

Kyle wants to change her whole life, but Rory doesn’t like the stakes. After all, princesses are the ones who get the happy endings. . .aren’t they?

Sampler: Prancing Around with Sleeping Beauty

High above the crowded beach, an airplane skimmed the cloudless blue sky, its hum a distant whine over the thunderous surf. Behind it trailed a banner with red block letters. Cupping her hand over her brow, Rory Callahan squinted in the glaring sunlight.

WILL YOU MARRY ME, RORY?

She gasped, and her bare feet pressed into the gritty sand. Rory gripped the sides of her sunken beach chair. Her boyfriend, Dr. Brad Walker, a general surgery medical resident at Mountain View Medical Center, occupied the second chair, engrossed in a sports magazine, oblivious to the romantic gesture—or pretending he was oblivious.

Rory had accompanied him to the Jersey Shore for his parents’ thirtieth-anniversary party. When Brad suggested a morning at the beach before driving back to the Catskills, she never expected a marriage proposal. Her stomach clenched, the semi-queasy reaction surprising her.

After all, she had wanted this—well, maybe not this, not yet—but Rory had wanted a declaration of love from the guy her mother worshipped and that her annoying big brother insisted “wasn’t that into her.” Obviously Brad was into her. This proved his willingness to make their relationship work. She would show her brother, and her friends, too. Rory knew her roommates worried that Brad didn’t carve out enough time for her, but unlike Dylan, the girls minded their own business.

All brides-to-be probably felt jittery during the proposal. She choked down the very normal mound in her throat, reached over, and touched Brad’s hand. “I had no idea you were planning this. Yes. I’ll . . . I’ll marry you.”

Brad dropped the magazine onto his nearby flip-flops as if sand fleas had nested inside the pages. His chiseled face had blanched whiter than his pale chest, arms, and legs. Summer was almost over, and Rory would bet this was the first time he’d worn the charcoal print swim trunks she bought him. “What? What the hell are you talking about?”

“The airplane. Didn’t you hire them to fly that banner?” Rory inclined her head toward the sky, even as she submerged her trembling fingers in the hot grains.

When she was a kid, she and her brothers used to dig holes at the beach. They never bothered building castles as they saw Cinderella’s castle every day at their family-owned fairy-tale theme park, Storybook Valley. The boys preferred burying each other in the sand. To lure Rory into helping, her brothers insisted that if they burrowed a deep enough hollow, it would lead to China. Naively, she accepted their words every time.

She wished that mythical tunnel to China would engulf her right now. Apparently, there were two Rorys sunbathing today.

Brad fastened his gaze on the plane. For a long moment, he didn’t speak. When he finally did, his confident voice wavered. “I . . . I don’t know what to say. I didn’t hire that pilot. There must be another Rory here.”

His Adam’s apple bobbing, Brad glanced around at their fellow beachgoers sprawled on towels, under striped umbrellas, and relaxing in chairs. He looked everywhere but at Rory. Lobster redness crept up her neck, into her cheeks. Her SPF 30 sunscreen couldn’t prevent this kind of burning.

Following his lead, she joined in the happy couple search. No sign of an emotional bride-to-be on the sand, or in the water. Most everyone in the ocean continued leaping waves and bodyboarding, ignoring the life-changing banner streaming above them, and the few that pointed seemed like observers. The future newlyweds must have chosen another section of beach.

Was Rory short for Gloria? Lorelai? Victoria? She highly doubted the other Rory was named after Princess Aurora from Tchaikovsky’s The Sleeping Beauty ballet. Her middle name probably wasn’t Rose, either—in some renditions of the fairy tale, the princess was called Briar Rose, or Rosamond, hence Rory’s full, embarrassing moniker of Aurora Rose Callahan.

“I didn’t realize you thought we were so serious.” Brad watched a couple preschoolers chase a seagull. “Rory, I’m not ready to get married. I still have a couple years left in my residency, and you know I want a fellowship in surgical oncology. I need to focus on my career right now.”

Rory was also a masculine name of Irish and Scottish origin. Who knows, perhaps a gutsy female had proposed to her boyfriend. Rummaging in her canvas bag, Rory located a water bottle. She untwisted the cap and gulped the liquid, warm from too much time in the sun. Her eyes welled behind her sunglasses.

Please click HERE to find Prancing Around with Sleeping Beauty on Amazon.