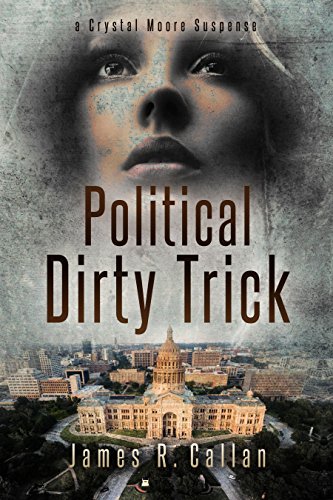 The choice for thriller readers who like their stories steeped in realistic scenarios and frightening possibilities during an election year.

Only Crystal believes that an art theft at Ron’s house is related to the election. She begins to search for clues which might tie the theft and a dead man to a political dirty trick and the fake news.

She finds the first clue, and quickly she is attacked and almost killed. But a pair of red boots changes everything.

Two more attacks land her in the hospital. It looks like Ron may lose the election. And Crystal may lose her life.

The next morning, Ginnie Leverett slid into the booth opposite her best friend, George Weeks. “Glad you came.” She was grinning like a kid who found a twenty dollar bill. She checked the nearby booths, and the position of the waitresses. No one was near. Even so, she leaned close to George and whispered.

“We’ve changed the race. Jim Bob will win in a walk. The Mondrian is in a safe place until the time is right.” Her hands were in constant motion as she bounced on the booth’s faded faux leather seat.

George Weeks’s expression befitted an undertaker. “Are you not at all concerned that a man is dead?”

“The man in Drake’s kitchen?”

Her face sagged, and she stared at the table, slowly shaking her head. “I just knocked him out so I could get out of there. He came in and found the painting missing and called Drake. Said he’d wait until Drake got home. And he sat between me and the door. What was I to do? I couldn’t just wait until Drake came home and found me with the Mondrian hiding in the pantry.” She looked up at George. “I just tapped him on the head. I didn’t kill him.”

“The police think you did.”

“The thief. Whoever took the painting killed the man.”

“Killed …” She looked down at the table and slowly shook her head. “I’ve never even gotten a parking ticket. I never cheated in school.”

A waitress approached and asked if Ginnie would like to order. George had a coffee, and Ginnie pointed at it and said she’d take one, too. The waitress went for the coffee and Ginnie stared at George. Neither said a word. Ginnie’s hands were shaking and she clasped them together, trying to stop them.

After the waitress delivered the coffee and left, Ginnie grabbed the cup in both hands and took several sips of the hot drink. “It was an accident. An unfortunate accident. I was just going to tap him, knock him out for a few seconds.” She stared down into the cup, as if trying to read something in the coffee. After a minute, she looked up. “Okay. Let’s not panic. I wore gloves. There’s no way they can trace this to us.”

“Us? I didn’t kill anybody,” George said.

His determined tone jolted Ginnie, and she realized her friend sounded very distant. “We’re in this together. We talked about stealing the painting, waiting until Drake collected the insurance money, then letting it look like he had hidden it himself.”

“I didn’t join up for any violence. I didn’t kill anybody. There’s no us concerning the murder.”

Ginnie was taking a small sip of her coffee and almost choked. Her eyes, a luminescent aqua, now turned hard. “You rented the storage unit in his name. You planned this. You talked me into being a part of it. You’re in as deep as I am.”