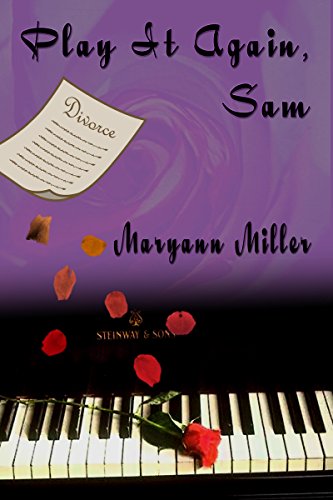 Turns the standard “The End” of a marriage into the “Once upon a time” of a genuine grown-up love story.

When her husband comes home from work one day to announce he’s moving out, Samantha Rutgers thinks it’s a joke. She hopes it’s a joke. It’s not.

He packs his suitcase and moves out. For twenty-five years, Sam was a corporate wife, a stay-at-home mom. Now she’s divorced, adrift, and alienated from her daughter who blames her for the divorce.

Ill-equipped to be a single woman in a whole new dating culture, she would have foundered without help from an old friend who challenges her to finish up the art degree she put on hold when she married.

Her classes open the door to a job at an advertising agency, where Sam makes several new friends and one enemy.

There she meets Frank Reynolds, who invites her to take that first step into new love. Gradually, as she slowly builds a new life for herself, Sam learns how to stand strong in the face of adversity, personal and professional.

PLAY IT AGAIN, SAM turns the standard “The End” of a marriage into the “Once upon a time” of a genuine grown-up love story. A life- and love-affirming look into the real-life events of divorce, children, exes, memories, regrets, beginnings, and the courage to love again.” Review by Laura Castoro author of A New Lu, Icing on The Cake, and Crossing the Line:
“This is a poignant story of human frailties, emotions, turmoil, confusion, and the sometimes, inescapable fear of the unknown. Samantha is encouraged to turn-off the familiar road of ‘what use to be’ and forge a new path of ‘what could be.’ Miller develops her characters well in this enjoyable story, giving them qualities that we would all relate to. A sensitive portrayal of romance, not of the sweet first-time love, but a realistic viewpoint of life and love, and the curve ball it can throw.”  Review by J.B. Scott

Sam’s breath caught in her throat and her voice broke, “John, you can’t be serious.”

“Please. Don’t make this any harder-”

“What?” She didn’t even try to keep the sarcasm out of her voice. “I should make it easy? You walk in here and end our marriage as casually as… as…” Emotion choked her and she took an angry swipe at the tears searing her cheeks.

Sam took a deep breath. “Then why is it happening?”

“Is there someone else?” she asked, barely having the courage to hear the answer.

The denial came quickly. Too quickly?

“I’m not. I swear.” He shifted his weight and looked away.

“Then talk to me,” she implored. “Tell me how we reached this point and I didn’t even have a clue.”

“It just happened.” He glanced at her, then away again. “I don’t know. One day I just knew I wasn’t happy anymore.”

Sam stared in disbelief. He was having a mid-life crisis? They used to laugh at people who let their lives fall apart like this.

“That isn’t a reason. It’s an excuse,” she said. “There has to be something else.”

“I told you there isn’t.” John raised his head in defiance and their eyes locked until Sam felt her composure about to crumble. The deep brown eyes that used to melt her heart now chilled her. Everything about him seemed to be changing. The square jaw she used to find strong and attractive was now hard and unyielding. And when had his hair thinned to mere wisps?

Feeling like she’d entered some strange time-warp, Sam shook her head in an effort to bring back the real John. It didn’t work. A stranger still stood in front of her.

His words focused her wandering mind.

“It’s me,” he continued. “I should have told you sooner. It was cruel to keep living a lie.”

Slowly, she sank into a nearby chair as a new wave of pain washed over her. Did he mean their whole life had been a lie? A game?

This didn’t happen to couples like them. It happened to people who had nothing in common. People who cheated. Argued. Screamed at each other. Not to people who’d lived over twenty-five years together in relative harmony.

Sam felt the pain burning inside, rising and swelling like some alien invader. She wondered if it would tear her apart and scatter her in little pieces across the freshly scrubbed floor.

She watched him walk out of the room, his back rigid with resolve. Should she go after him? Plead with him to stay?

The small shred of dignity she had left kept her rooted in the chair and shock held her immobile as John passed back through with a suitcase. She thought she heard him say he would call in a few days, but she wasn’t sure.

If she tried hard enough, she could pretend that he was just leaving on a business trip.

Sam sat in the chair in front of the window until the late afternoon sun faded toward dusk. Idly, she glanced around the kitchen. Shafts of pale light illuminated the blue flowers she’d so carefully painted on the white squares of tile above the sink. They’d built this house together and hadn’t even argued about the pattern on the wallpaper or the color of the carpeting.

That said something about the strength of their relationship, didn’t it?

Then again, maybe she just hadn’t seen it coming. A man doesn’t decide to throw away a marriage overnight. Surely there had been signs of his discontent. Had she been too blind or too stupid to see them?

Not liking where that train of thought led, Sam stood and went to the phone. She had to talk to somebody. She punched the first few digits of Melissa’s number, then hesitated. What could she say? “Hi, this is Mom. Just called to tell you Dad wants a divorce.”