Sampler: One Alone in the World by Sarah Stuart 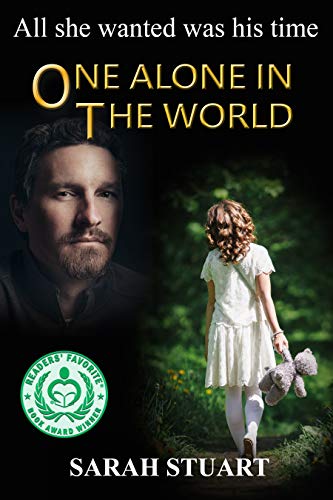 Eleanor tries to help by locating and contacting her maternal grandmother reviving dangerous secrets from the past.

Richard and Maria’s inheritance, The White Hart Inn, is in financial trouble, and they are working very long days.

Richard’s audience is shrinking as he gets older, and for Maria, all the fun has gone out of cooking, and yet only The White Hart Eatery profits stand between them and bankruptcy.

After an overheard row, their daughter Eleanor tries to help by locating and contacting her maternal grandmother reviving dangerous secrets from the past.

Sampler: One alone in the world

Maria entered a new booking for the eatery with a hand she could see shaking. One of the strangers who’d brought a companion for a meal wanted to meet her. He proposed to stay after she closed and have what he called “a private chat”. She’d refused, obviously: a, she was married, and b, when the last customers left, she ran upstairs to change and joined Richard for the entertainment. Continuing to say no wasn’t an option; Gilbert Fisher was a journalist who had columns in various food industry magazines. His opinion could take The White Hart Eatery into the top fifty places to eat in London or kill its reputation forever.

She knew he liked her char-grilled squid with her own chili jelly, her wild fruit sorbet, her steak pinwheel, and her Ashhaven Tart topped with chocolate sauce. He’d enjoyed them, and she’d been able to answer yes when he casually asked if she sourced wild fruits. Better still, the lady with him, a television celebrity cook, had chosen different dishes and approved them. Maria Carpenter was grateful they had no television, so she hadn’t recognised her and tipped tortellini soup in her lap from sheer nerves. What Mr Fisher – “call me Gilbert” – wanted was her background story that he said would interest readers of magazines like Women and Home, Platinum, and the BBC’s Good Food. She’d thought that was all recipes –

One week to decide on three menus that included nothing Gilbert Fisher had even seen her serve, never mind chosen and eaten. One week to think what she might tell him about herself that would interest people who read magazines she used to see in the hairdressers before money and time to have her hair done professionally ran out – and his companion this time would be a photographer, so make time and invest the money. How was she going to tell Richard?

The eatery was her dream and entertaining in the bar was his, and Alf drew bigger crowds for the open mic nights. So much bigger Richard was talking seriously about asking him to do at least one more night a week. She must find that song!

‘Mrs C, do you want all these mushrooms, or shall I use some of them in the steak and kidney puds?’

Bertha’s voice cut through her thoughts and reminded her she was supposed to be preparing Beef Wellington. ‘I need most of them. Did anybody say they didn’t like kidney?’

‘Do a small steak and mushroom for them. I need most of the mushrooms I ordered, but you can use yesterday’s leftover blackberries in the apple crumble.’

She clamped on her headphones, leaving Bertha to her usual lecture about cost-cutting. She didn’t worry about The White Hart finances; she grumbled because the lunch-club members ate well, as if she didn’t, making sure she stopped for her breaks and taking her choice of any food going.

Rolling pastry, she let music stream into her ears. One day, she’d hear the perfect song for Richard – one day wasn’t good enough. It had to be soon. Not that he could record it, and others, on a demo disc in a week, and if he did, it might take ages to interest a recording company, but he needed to see she was determined he should achieve his dream.

Bertha moved one of the earphones and yelled. ‘Batter that pastry much more and it’ll be tough as old boots.’

Ear ringing, she nodded her thanks; Bertha was right –

There I was ready to fight; I had my army, I had my ranks. You came and outnumbered. You had your missiles, you had your tanks.

I had no options – nowhere to go. Just some fuel and a bullet or two. I could have flamed out, the ultimate sin. Instead, I gave in, I gave in to you.

Richard had resisted her for so long, but he’d given in. Lover, best friend – this was the song that could make him irresistible to every woman who heard it and all those they talked into coming to The White Hart with them.

I Didn’t Quit I Surrendered
https://youtu.be/Y6U73Aa-QBA

Please click HERE to find One Alone in the World on Amazon.