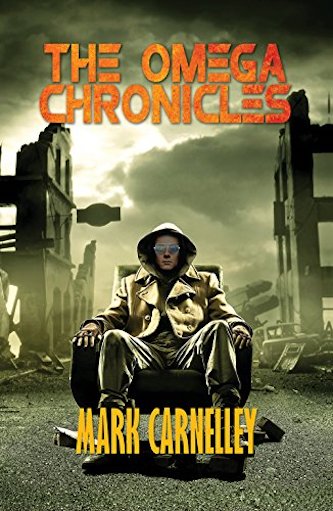 Have you ever wondered what you would do if the world as we know it ends? Suppose you are the only survivor? Read an excerpt from The Omega Chronicles.

A giant cosmic dust cloud is first noticed in 1962, its discovery kept a secret so as not to cause worldwide panic, finally hits the Earth fifty-five years later with catastrophic devastation that wipes life from the face of the planet.

One man, Colton Lee Steele, miraculously survives whilst stationed in Antarctica and thus starts his struggle to at first comprehend the enormity of his predicament and then plans and travels to the Northwest Territories to finally find a place he can call home.

It is a harsh environment he finds himself in but through perseverance and true grit, he discovers an inner strength that will guide him through his final years, and along the way discover that life will always find a way.

Things went to shit on December 14th. From what I discovered after I awoke, contact with the dust occurred at 01:30 GMT. The Hawaiian Islands, the Aleutians, Anchorage, the entire west coast of the United States were among the first to go. By December 22nd the entire world had been enveloped. The Antarctic, although only covered for 6 days was, again, another saving grace for me. I gleaned this snippet of information again from the net, something to do with the dust particles having a magnetic charge attached to them which was opposed to the charge here at the Pole. Thus the particles were ‘pushed’ away from McMurdo. Not that it mattered a damn to anyone else.

What was in those particles was a substance that when it came into contact with the nitrogen in our atmosphere, turned the air toxic. And not just toxic, heat was generated by the chemical reactions. That heated dust swirling in the atmosphere and rising to the stratosphere would, so the original thoughts were, block the sunlight for nearly ten years. The protective ozone layer was 85% destroyed. Enormous amounts of extremely harmful ultraviolet light would penetrate the dust and reach the surface. All that sunlight would be blocked and cause the whole planet to rapidly cool. Within three years there were fears we could have another Ice Age. Not that that mattered, there was not one living thing alive to give a fuck. Well, except me that was.

As it turned out the cloud had intersected Jupiter prior to hitting us, which while lessening the length of time that it would remain enveloping the Earth, also lessened the amount of debris that hit us.

Still, life as I knew it had ended. And don’t get me started on acid rain. According to the National Geographic, acid rain describes any form of precipitation with high levels of nitric and sulphuric acids. It can also occur in the form of snow, fog, and tiny bits of dry material that settle to Earth.

What occurred was acid rain to an unheard of degree. The whole world became one giant wet atmospheric acid soup. Every single plane that was airborne at the time basically had its engines clogged with the dust. There was not enough time to warn all flights of the impending disaster. They were the lucky ones, their planes crashed with everyone on board dying immediately instead of a slow agonizing chocking death. I knew which way I would have preferred to have gone out.

With 8,000 to 13,000 planes or over 1 million souls wiped out in seconds! A lot of metal structures open to the elements came down over the ensuing few weeks. Communication towers were hit, the thousands of satellites that escaped the high acidity were still orbiting and operational; there was just no one to hear what they were saying. The global devastation was total. Towns, cities, especially in Third World countries were reduced to vacant lots of rubble.

Eighty percent of the world’s forests were destroyed, wiped off the face of the earth. Their leaves and foliage were gone, bare trees remained and over time the dust would lay waste to these as well. Every single living, breathing speck of life was killed within days. There was no escape. The particles swept through our atmosphere without thought or control. Even those few unfortunate souls who lasted a few days, running to higher ground or bunkering down, were caught. Every waterway, stream, river, you name it, became toxic. Most marine life perished. I suppose only those that lived miles under the surface might have lived. I don’t know. I really didn’t care.

Why was I spared? I have no answer. I wasn’t special in any way. I certainly wasn’t there to save the world. The following is my account of my travels through a world that had been reduced to, what I considered, a primordial version of what it was just like when the first fish stuck its ugly head out of the ocean and took its first lungful of air.

I awoke after 12 days, to an alien world.

Please click HERE to find The Omega Chronicles on Amazon.