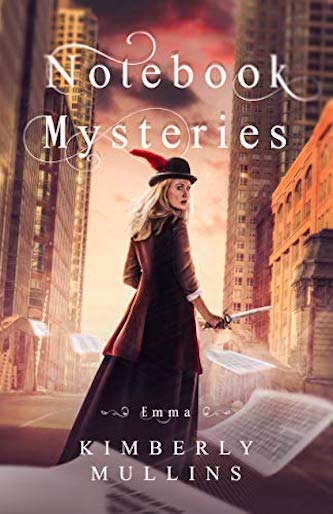 Review: “Emma’s habit of writing her observations down in her black notebooks leads to adventure, danger, and the unearthing of dark secrets.”

The saga begins in Chicago in 1881; when the city was just recovering from the great fire of ’71. Emma works at her family bakery but wishes for more adventure. There is an opportunity for her to have more adventures by working with the boys on the delivery wagons.

Her observation begins to pull her into cases ranging from robbery to murder. One case becomes more and more complicated and pulls in her family; To protect them and herself-will her skills with knives and self-defense see her through?

Where to start, the Narrator thought as she sat drumming her right fingers against her lips. Where to start, she thought again, glancing around the brightly lit room, looking for inspiration. The room she chose to start her writing project was in the attic space of the old Victorian she and her family called home. The house faced east, the room’s dormers caught the bright morning light, and it washed across the writing desk where she sat. She chose the early morning hours to work on her book because she liked the feel of the sun on her face and the peace it gave her.

The room was large and furnished with an old dark brown leather chair stationed next to a lighter brown antique desk on the east wall. Located across the room from the desk was a tall white dresser with brass handles, two white iron twin beds covered with patchwork quilts, and aged lace throws. The floor was whitewashed and a large colorful area rug lay under the beds.

It was a place where she could be away from the noise within the house. Her family was usually in high spirits about something or another and could be quite loud. Family, she thought with an exasperated shake of her head. I’ll have to get to them soon enough.

She moved her hand from her lips to where the pencil laid on the desk, absently rolling it back and forth, while she continued to concentrate on her book plans.

A shuffling of shoes on the steps caught her attention, and her mouth quirked up in a quick smile. She looked toward the door and saw her dear-one walking into the room.

Dear-one was a tall, slim man—so tall that he had to duck under the doorway to enter the attic. He wore his usual brown suit with a pressed shirt and vest. His face rested in an absentminded expression as he carried a battered brown box under his left arm and (of course) an open book in his right hand.

He dropped the box onto her desk, startling her, and then settled himself into the leather chair nearest her. He relaxed back, put his feet up on the edge of the desk, and continued to read. He hadn’t glanced at her the entire time, but that wasn’t unusual.

He didn’t look up until she tapped his battered brown leather shoe.

“Where should I start?” she inquired, tilting her head toward her writing paper and typewriter.

The reader of this might wonder why the Narrator chose not to inquire about the box. Well, Dear-one was always moving things about and working on projects; it got tiresome asking what was in one box or another, so she just nudged it out of the way.

He acknowledged the question by lowering his book, brushing a thick brown curl back off his forehead, and then, finally meeting her eyes with his, stated rather brusquely, “Well, at the beginning, of course. Where it all started.”

She glanced down at her desk, again nudging the brown box so she could glance at her notes. The beginning, she thought. She reflected on how life as an investigator had begun. The long and varied career with many highs and lows, that affected everyone who came into contact with it. She did not know it would eventually lead to this point and writing a book, but she wouldn’t have changed it for the world. “But the details of it. How to remember everything?” she fretted aloud.

Dear-one didn’t look up from his reading this time when he said, “Look in the box. Something in there might help.” She didn’t notice a sparkle in his eyes, as he kept them averted toward his book.

She glanced at him suspiciously, stood up, and folded back the lid. She realized what was in it almost immediately and knocked the heavy desk chair back as she moved closer. She sighed into a long smile. Looking at him, she said, “The notebooks, where did you find them?”

He glanced up and, with a smile, said, “I had them put away. I thought you might want to keep them to look at one day.”

Her eyes filled with tears as memories began flooding her senses. She pushed back the tears and, with a deep breath, started pulling items from the box. As she kept removing notebooks, she was taken aback by the sheer number of them. They were small black scribble books that fit easily into a pocket, full of years’ worth of data, detailing the life of an adventurer. “So many,” she murmured, “so many adventures.”

Dear-one agreed quietly. “A lifetime’s worth, to be sure.”

He had suggested the beginning. I might as well start there, she thought. She dug until she found the oldest notebook and the earliest case. The black leather crumbled a bit as she handled it, but the papers inside were not damaged.

He interrupted again to say, “Love, there is another case to discuss, a very important one,” he reminded her. “It should be the first one.”

She knew the case of which he spoke, and finally agreed with a nod of her head. “Yes, you are quite right. I should start there.”

She started organizing the notebooks into piles, stacked by date. Though, for this case, she could almost go from memory. She opened that first notebook and saw the title. She picked up her pencil to start the work.

Chicago, 1871 – Late Night“Wake up, Dora, Sister,” Papa said as he nudged their shoulders. He reached over to turn up the gas lamp above the sidetable.

The two girls had been asleep for hours and were groggy.

Dora yawned as she opened her eyes and saw Papa standing over them. Intuitively, she knew something wasn’t right. “Papa? What’s wrong?”

Sister woke, rubbing her sleep-filled eyes, then laid silent and watchful, waiting to hear how Papa would answer Dora’s question.

“No questions now. You must get dressed,” he said as he handed each of the girls their clothes and sat on the edge of the bed.

They quickly scooted to the side where Papa sat and started pulling their dresses over their nightshifts.

He knelt in front of them to help with their buttons.

They watched Papa silently and noticed his hands shaking. His hands never shook. Sister’s hand reached out for Dora’s; they held tight to each other, staying silent, ready for Papa’s next direction. Dora and Sister were little girls of eight and six and would do anything their beloved papa asked of them.

It was very dark and quiet in the house as the girls held each other’s hands and followed their father down the staircase to the first floor. As they moved closer to the front door, they became aware of the noise outside.