Emma is now becoming firmly established as her own detective and works with her sister and other friends to build and solve cases.

Chicago, 1883:18-year-old Emma Evans graduates from business school and, building on her investigating success becomes embroiled in several perplexing inquiries. New specialists skilled in photography and disguises join her team. A new team member has a background that gives Emma pause-can they work with her? and can they accept her. Emma gains professional recognition for her abilities as she struggles to define her feelings for the two men in her life.

But things are not as they seem… in her business life, nor in her puzzling Pinkerton case. Assaulted, threatened, and confused, can Emma hold her new business intact? Can she help an old family friend survive?

The cases Emma was involved in over the last two years had involved theft from the Stubing Department store, pickpockets, and smuggling operations involving John Harden. In each case, the clues seemed to be leading in the same direction—to one criminal organization.

The spider web of cases intertwined so that the only way to deconstruct it was to pull the one string holding everything together. Emma thought that string was the head of a local crime organization, but it turned out, it was Mama. Everywhere she turned, Mama was connected. Emma had initially stumbled on the fact that she had been helping a reporter with investigations into illegal activities during the year she died. Mama had inadvertently led the reporter to an opportunity he couldn’t pass up, to oversee a large crime organization. That reporter wanted Mama to be part of it, but she had disagreed and he had killed her.

Who was that reporter? Daniel Cooper, local paper editor, and secret crime boss. He believed strongly that, if he could control the news, he could do anything or be anything he wanted. He was right—for a while.

Emma was able to deduce that the cases were probably connected and were somehow tied to her mama. She also knew Daniel had more involvement than he indicated, but Emma never suspected he was the person who murdered her.

The final clues had unraveled when Thomas, Mama’s good friend, and coworker at the bakery, identified Daniel as her killer. Since she died, Thomas had always been there in the shadows looking out for Emma. He knew one day he might have to step in to save her. What he didn’t expect was for Emma to end up saving his life when Daniel tried to kill him.

On that final day, Emma had ended Daniel’s life, though it wasn’t something she’d planned, she didn’t regret it. She did what she had to, to save them both.

Emma pulled herself into the present and opened her desk drawer to find her current case book. She still kept her observations in the black notebooks she always carried with her. As she tried to pull the drawer open, it got stuck and she had to pull forcibly on the handle. When it finally gave way and allowed her access, she knelt to discover what had kept the drawer from opening. It was another notebook, wedged in the back; she reached in and pulled it out.

She sat back on her knees, looking at it for a long moment, and realized which one it was. It must be a day for memories, she thought, shaking her head. That notebook, the black cover faded with age, was from another day long ago when she was ten years old and involved her “incident”.

The Narrator said, “The incident was when Emma was attacked at the age of ten by a career criminal named Zeke Jones, and it was not the last time he would go after her. He had a personal vendetta against her; he felt she was always taking something from him that he believed was his.”

Dear-one commented wryly, “To be fair, she did keep uncovering cases where he was also involved. The Stubing store theft, the smuggling operations involving store owners, and then when he had volunteered to “take care” of Emma for the notorious gangster John Harden.”

The Narrator added, “When he did go after her that last time, Emma was ready for him.”

Dear-one asked, “What happened to Zeke?”

The Narrator said, “Well, we will get to that later.”

Dear one said, “You know you say that a lot.”

“I know, but I always plan to go back,” commented the Narrator, as she continued to write.

Emma opened the notebook and remembered how it had finally returned to her. 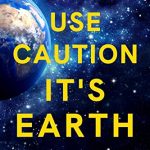 Our Reviews of Use Caution It’s Earth by S.S. Bazinet