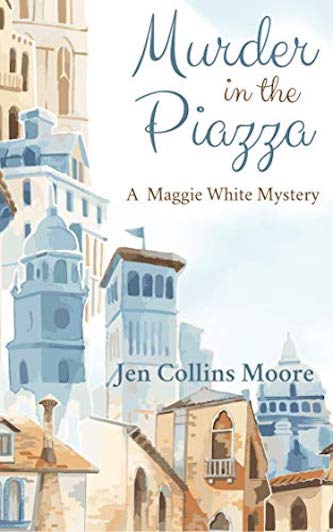 A rollicking plot, sparkling wit, thrilling twists, and a fascinating cast of characters, all set against the irresistible backdrop of Rome.

Maggie White, a downsized American executive stuck in Rome on her husband’s expat assignment, is finding the dolce vita isn’t all it’s cracked up to be.

She’s taken a job offering painting instruction to well-heeled travelers and her boss—a rather unpleasant English lord—has turned up dead in his penthouse.

Maggie’s left with a palazzo full of suspicious guests, a valuable painting her boss might have stolen, and a policeman who’s decided she’s the prime suspect.

Now Maggie must keep the tour up and running while she tracks the killer and works to clear her name.

Sampler: Murder in the piazza

The city of Rome celebrates its defeat of the barbarians in 753 B.C. with reenactments of battle scenes and an impressive fireworks display. Guests of Masterpiece Tours will enjoy the view from Lord Philip’s private terrace, staying, quite literally, above the chaos and crowds that spoil so many Roman holidays.

Maggie White started fantasizing about Lord Philip’s death on her third day. Just a painless, but fatal, heart attack that would strike her boss down in the middle of the night. When that failed to materialize, she imagined him taking a wrong step in front of a speeding bus. Today she moved on to poison.

Maggie was the “new girl” at Masterpiece Tours, which offered exclusive painting holidays to well-heeled Americans. She was seated on the rooftop terrace of a minor 17th-century palace on the Piazza Navona with guests on the current tour. It was a lovely April evening, her chair was comfortable, and she was pleasantly full. But Maggie had had as much of Lord Philip Walpole as she could take.

Could she sneak arsenic into Lord Philip’s whiskey? Maggie considered this as the tourists around her oohed over a particularly brilliant firework bursting over the Colosseum in honor of Rome’s birthday celebration. Would he notice the taste? How much would it take?

Getting the deadly liquid would be a problem. She seemed to remember arsenic came from juniper berries, but perhaps that was cyanide. She took a sip of her drink. Espresso, smooth and strong. Maybe slipping the poison into Lord Philip’s morning coffee would be safer.

It was only her sixth day on the job—four days with the tour group and two before the guests arrived—and the man had reduced her to tears five times. And Maggie wasn’t a woman who cried easily. She’d been in Italy for five months, spent three of them trying to fit in as a woman of leisure, then two fruitlessly looking for a job, and it wasn’t until she met Lord Philip that she’d lost control.

Maggie breathed in the scent of the flowers in the giant pots around Lord Philip’s rooftop terrace and sighed. She wouldn’t kill her employer, pleasant as it was to imagine. She’d managed to survive fifty-five years without killing anyone—including that awful Lana Harrison, who thought she knew more about managing an advertising campaign than Maggie—and she would survive without killing Lord Philip, too.

She could quit, just as her husband, Burt, said she should. But Maggie wasn’t a quitter. Hadn’t she been the youngest woman ever promoted to vice president at Bells & Wallace? Hadn’t she single-handedly saved the PTA bake sale when 450 cupcakes, cookies, and Rice Krispies treats were savaged by Mrs. Simpson’s basset hound, Napoleon? And hadn’t she sent two high-spirited children off to excellent liberal arts colleges?

Quitting now would prove her husband was right about this job being a mistake, and Maggie wasn’t about to admit that.

Please click HERE to find Murder in the Piazza on Amazon.