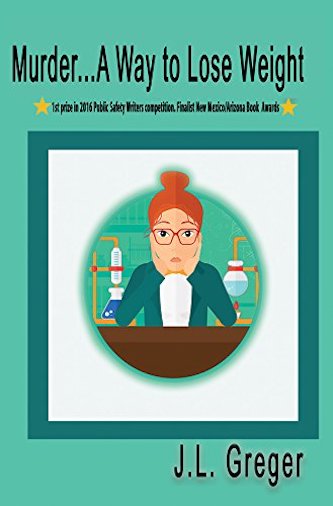 She lay curled on the floor with blank brown eyes staring up from an ashen face. Linda screamed, then felt for a pulse and found none.

So is fitting into a new job where you aren’t wanted.

In Murder. A Way to Lose Weight, Dr. Linda Almquist attempts to do both as she investigates two diet doctors who are endangering the lives of their obese patients.

When she finds one diet doctor dead, she and the police suspect the other diet doctor but soon learn the dead diet doctor had annoyed many.

While Linda fears for her job, the police fear for her life.

Linda continued to think about Richard Varegos after Jeanne left. He was a good university investment—a researcher who potentially could raise millions in research funding and more in patent profits. The Dean had made it clear it was her job to manage important assets, like Richard, and protect them from their own bad habits.

Linda looked at her stack of mail and saw an envelope marked CONFIDENTIAL. She contemplated the envelope as she thumbed through the rest of her mail.

She slit the envelope and scanned the contents. Izzy was charging Richard with scientific misconduct. Linda felt the muscles around her gut tighten. This is in the third category.

She studied the first three paragraphs. Izzy alleged Richard, by hiding important details about their study published in Science, was endangering the health of human subjects in their current study. The charge didn’t make sense. Izzy must have approved the paper she co-authored with Richard three years before. Why was Izzy mentioning unreported problems now? And how did an omission from a report on a rat study affect current human subjects in a clinical trial?

As Linda read the rest of the document, she felt nauseated. Izzy had provided enough facts to warrant an inquiry into the allegations. That meant work for Linda. Where do I begin? She noted the hospital’s clinical laboratory had analyzed samples from the current human study.

She called the director of the clinical lab. “Ed, tell me about the assays Izzy Roth ordered on the obese subjects in her and Richard’s current study.”

Linda felt heat rise up the back of her neck as she listened to Ed. “When did this blow-up happen? Make a copy of those data. I’ll be down to the lab to pick them up immediately. Thanks.”

She was halfway to the clinical lab when she stopped. Better stop by Izzy’s office first. Linda straightened her shoulders. She walked slowly and deliberately to Izzy’s office on the third floor.

She forced herself to smile before she knocked on the door. No one answered. The door stood slightly ajar. “Izzy, you in?” She pushed the door open with her elbow.

Izzy was slumped asleep at her computer. When Linda gently touched her shoulder, Izzy lost her balance. Her head rolled toward her lap, and she tumbled from the chair. She lay curled on the floor with blank brown eyes staring up from an ashen face.

Linda screamed. She knelt, felt for a pulse, and found none. She looked up. Richard Varegos stood over her, looked down, and smirked.

Please click HERE to find Murder: A Way to Lose Weight on Amazon.