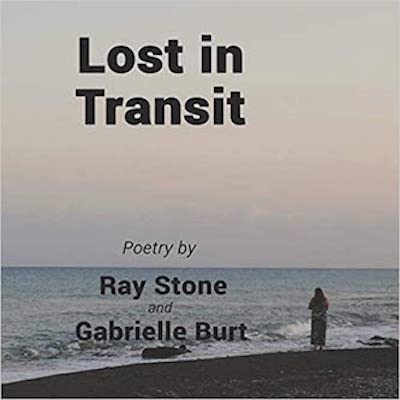 The poetry and photographs in Lost in Transit reflect Ray Stone’s life’s experiences, as well as his literary moods.

This is the second poetry book by Ray Stone which includes poems from this year’s guest artist and film-maker, Gabrielle Burt, a wonderful poet from New Zealand.

Many of the photos are by Ray, a professional photographer. His photos compliment his work which relates to his life’s experiences and moods.

A writer with seven books published, he will be publishing two more, a biography, and a political thriller in 2021.

Gabrielle, ending 2020 with a documentary production, continues to write her beautiful verse while following her film career.

Ray, living on top of a Cypriot shoreline draws his inspiration from the Mediterranean waves and loves the loneliness of the beach.

His poem “My Beach” says it all.

Ray Stone is an accomplished author with a variety of published works to his name. Born just outside London in 1946, he grew up in post-war Britain during a period of depression and ration books, bombed-out housing, and BBC radio. At school, he won a writing competition at the age of eleven and later in his teens widened his interest in the arts.

At the age of eighteen, he began writing poetry and lyrics whilst studying at college. Two years later Ray worked in theatre as a technician with many orchestras’ and artists including the London Philharmonic, London Symphony, Mantovani, The original Doyle Carte Opera Company, Harlequin Ballet, Joan Baez, Jimmy Hendrix, Oscar Peterson and worked on local shows such as My Fair Lady, Camelot and West Side Story.

His poetry won first place in 1998 in an international internet poetry competition with ‘Angry Silence.’ Moving to Colchester in the same year he wrote a full-page article about the historical significance of the locale and was published with a by-line in the local press. Whilst writing his first novel Ray returned to writing lyrics and teamed up with a local composer. Together they produced and recorded five blues numbers.

while skippers take their watchful stock

of tactics by the other team

as Coutts gives up his place to Dean

With effort less, and expert ease

they read the signs and catch the breeze

that carries them up to the line

And once again, they’re dead on time!

The starter’s gun.  A slingshot start

We’ve out manoeuvred them at mark

As Luna Rossa, down 4–nil

Know in their hearts, it’s all up hill

Two lookouts sit atop their masts

To find the puff their given tasks

The wind is dying. What a race

Round the mark, a gain, again

a maverick breeze could change our place

Whooshing whitecaps as we pass

Close behind us, Prada’s mast

as inch by painful, minute inch

Our Waitemata – calm or rough

Where yachties never get enough

of sailing P-class yachts at 10

to racing hard as full-grown men

Our boat – is magic, long and black

with tons of speed. A dream to tack

we kept our goal within our sight

Our Kiwi Team is small but tough

We come from North Cape to the Bluff

With courage way beyond our size

we sailed away and kept the prize!

MY BEACH By Ray Stone

There’s a part of me already there

We walk in silence, hearing voices

From along this sandy bed

Big and small, tall and thin

They whisper, shout, and talk

So many people in my head

Along the beach, we walk

I see them in the surfing waves

Costumes lit by the sun

From centuries past to modern-day

Their stories have just begun

I can see a scene in shallow pool

As scene changes, I see next chapter

As story develops I look to the sky

I feel sadness, happiness, and pain

Characters know their lines so well

But I must check them all again

I write because I love to write

This beach is mine alone

It hides many stories still untold

Where this writer is a dreamer

May the waves roll in forever

On my beach at Agia Marina

Please click HERE to find Lost in Transit on Amazon.

Once Around the Writer’s Block with Jeff Russell