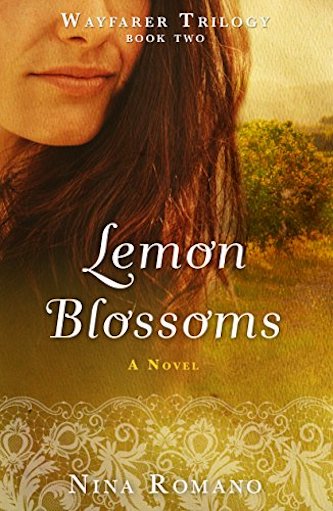 Whispering in my ear that life, like the lemon tree, houses both the bitter and the sweet.

In the continuation of Nina Romano’s epic Wayfarer Trilogy, an early childhood accident propels Angelica to battle trials in a world where proof of virginity is paramount.

She suﬀers the trauma of her aunt’s death in childbirth and is catapulted on a voyage towards the nunnery to seek refuge from a fear of intimacy.

I was born in a lemon grove, the scent of blossoms everywhere. Mamma told me it was paradise on earth, and so she named me Angelica, whispering in my ear that life, like the lemon tree, houses both the bitter and the sweet. A breeze had brought to earth a cover of white blossoms, and Mamma said she imagined a winter playground somewhere else. The day I was born, she removed a veil from my face while lying in a bosk of flowering trees, and looked up to see tiny white zagarelle frame an ocean of sky that mirrored the straits of Messina.

Mamma insisted we speak Italian—the language of angels she called it—but sometimes we’d slip into Sicilian. After she had my brother Peppe, Mamma lost four children before I arrived, followed by two sister. Mamma prayed her guardian angel would send her a celestial being, but instead she got me. Mamma had a thing about angels—she said we are born with a host of eleven thousand watching over us. She had promised that if I were born and lived, she’d make sure that I would be devoted to my own patron and with God’s help the seraphim could choose amongst themselves who would guide me. That poor angel didn’t have an inkling of what he’d be getting into.

Angelica—a name that caused me difficulty right from the beginning. Angels are listed in God’s Chain of Being as below God, but above men. And men are above animals and animals are above plant life. I had trouble with all of this because I knew I was human, and humans suffered just like animals. And on my life on the farm I had learned to love animals.