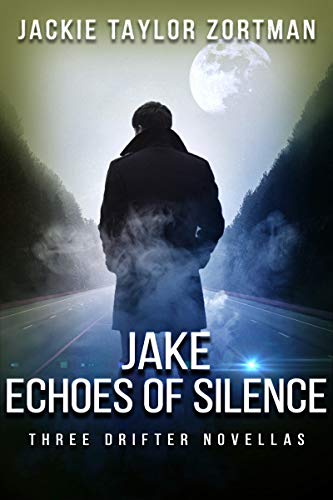 What is Jake’s past, present, and future? Will he finally be able to settle down or will he be forced to remain a vagabond?

JAKE: Echoes of Silence contains three romantic suspense novellas in a single volume. The stories follow the adventures of Jake, the Drifter, who is a drop-dead gorgeous fireman with a Harley. He rides from town to town without a particular destination until a location sends out a signal for him to stop and stay awhile.

Usually, it is because of some crisis that he can fix. His nemesis is a shocking secret that he cannot reveal and the reason he is compelled to move on, sometimes leaving a heart-broken woman and close friends behind.

He’s single and intends to remain that way. He wants nothing more than water with ice and food for his rumbling stomach. Inside a café, he finds someone he was not looking for who causes him to break his rules.

When a wildfire ignites, Jake is the only one prepared to fight it and takes control. His landlady quickly adopts him as her pseudo-son and he accepts her as a mother-figure.

Are the answers to it all simmering inside the fire or is it something more?

The ending will shock and surprise you.

JAKE: Winds of Change has Jake on a ski trip to Telluride, Colorado from his Idaho job. He falls in love with the western slope terrain and decides not to leave.

Not finding a firefighter’s job, he becomes a Fire Investigator for the Sierra, Colorado PD.

He meets a mystical free-spirited older woman in the local bookstore where she works. By coincidence, her stunning daughter becomes his neighbor in adjacent hotel apartments. They develop a sizzling no-strings-attached relationship and spend much time together.

On a trip to Redstone, Jake uncovers the answers to many questions in his primary case. As he prepares to leave Sierra, he is the one shocked by the secrets revealed to him.

JAKE: Echoes of Silence tracks Jake back to Kimble, Colorado, to finish old business. He learns that his secret has been revealed by his former landlady and the woman he loves.

He discovers his love interest is involved with someone new and hesitant to accept him. In the ashes of his former abode, he creates the answer to the owner’s problems post-fire.

Another wildfire breaks out and Jake finds himself saving the man who is his competition. Security cameras reveal a surprise that turns things around for Jake’s mission.

Will he finally be able to settle down or will he be forced to remain a vagabond?

Jake didn’t slow down when rain began to drizzle about three miles north of Winchester. He knew he should, but he’d ridden his Harley so many times and places that he felt he could handle a little stretch of wet pavement with no problem. When a gentle rise in the road leveled out, Jake was surprised to see a huge oil slick on the highway. He hoped to slide right through it. Unfortunately, that wasn’t the case.

Jake and his cycle went airborne as soon as they hit the oil slick, then tumbled end over end several times, crashing down and skidding along the highway. The faceguard was torn off his helmet, plus the back and one arm of his leather bomber jacket were shredded. His helmet came off, and the next thing he remembered was staring up into the face of a medic beside an ambulance as he was being placed in the back of it on a gurney. Running Code Three (lights flashing and sirens blaring) he was transported to Winchester Memorial Hospital and immediately rushed into the ER. From there he was hustled into surgery where the best plastic surgeon on the western slope of Colorado was waiting to treat his injuries.

Four hours later, he awakened in a hospital bed in a private room. A nurse in a colorful blue and white patterned smock and navy blue scrubs came in to check his vitals as soon as he was awake. Jake looked exactly like a mummy. He was wrapped in stark white gauze from the top of his head to where a blanket covered him at his waist. There were two slits in the gauze wrapping for his eyes and one for his mouth. Though Jake suffered horrible road rash, and numerous cuts and scrapes to his face and body, most of his injuries were superficial. To prevent his wounds from infecting and to ease the medicated pain, the medics had wrapped him completely.

“Do you happen to know what they did with my Harley?” he asked the nurse.

“No, honey, I don’t. But there’s a policeman outside the door waiting to talk with you.  Maybe he’ll know,” she said. “I’ll send him in.”

When the cop first saw Jake, he was flabbergasted. Startled, he asked, “Have they let you look in a mirror yet?”

“No. Why?” Jake said. Not waiting for an answer, he asked, “Do you know what they’ve done with my Harley?”

“Your cycle was totaled. But you have insurance. Right?” the cop said.

“Yeah, I do. But I loved that Harley.” Jake was instantly depressed.

“We’re not going to press any charges against you. Seems like you’ve paid enough with your injuries.” The cop pulled a cloth wrapped item out of his inside jacket pocket. “This is all that’s left of your Harley,” he said as he handed the wrapped item to Jake.

Jake laughed when he saw what it was. “Of course, this would survive. It’s my past, present, and future.”  He was holding the Maltese Cross emblem of the fire services. Jake considered the fact that the emblem was still intact to be an omen pointing him in the direction he needed to follow.