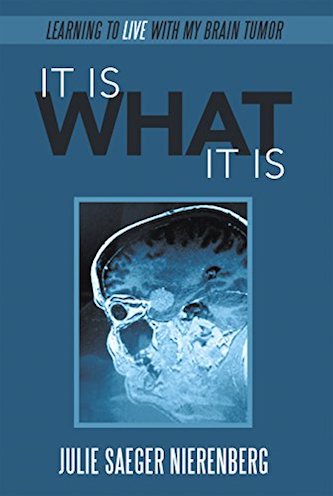 Included in the book are self-coaching strategies, helpful resources, and lots of email exchanges with friends, family, and doctors.

I wrote this manuscript as a journal documentation of my brain tumor diagnosis, discovery, and decision-making process, a journey spanning approximately twelve months, leading up to my final chosen method of treatment.

Some of the chapters are humorous, some rather poignant and some include a lot of medical details.

My whole point was to let readers know what that was like, a long and involved investigative process.

I include some self-coaching strategies, helpful resources, and lots of email exchanges with friends, family, and doctors.

May all who read this find something in its chapters that resonates with your head and heart.

Sampler: What It Is: Learning to Live with My Brain Tumor

This is exactly how I found out.

“You have masses in your brain,” said the doctor who had called me in. Substituting for my own doctor, she was proactively taking steps to care for me and move my case forward, while my own physician was out of office all week. She conducted visual clarity and visual range tests.

I wondered: Were the brain masses lurking near my optical processing centers, prompting these tests?

“Wow, I thought it would be a sinus issue!” was my reply. And I still thought so. Couldn’t you be wrong about the brain masses? This is what denial feels like. Brain masses? Who knew? I’ve had headaches, cranial-facial pressure and some other sinus-seeming symptoms. “I’m just sure I have sinusitis . . .”

“The MRI shows that you have masses, tissue of an unknown type, and in places in your brain that may contribute to some of the problems you’re experiencing.”

After asking her many questions, which she declined to answer, responsibly citing her lack of knowledge and the somewhat vague nature of the MRI (magnetic resonance imaging) scan report, I requested a copy of that same report. She would not share it with me, saying the neurosurgeon would be better equipped to comment on it and to order the best tests for this preliminary stage. Now I really wondered what that report said . . .

The reassuring things she had to say were: 1) we found it now before any further growth and 2) the radiologist’s report said it did not look like “cancerous” masses. Their true nature, source and treatment are all in the category of unknown until further diagnostic work is done under the neurosurgeon’s pending care.

I asked about alien digital programming implants and Star Trek-ian otherworldly brain worms as possibilities for these masses of unknown origin, but the doctor’s sense of humor wasn’t as desperately creative as mine. I barely got a smile.

And so went our short visit. The substitute general practitioner sent an urgent referral to a neurosurgeon and I entered a waiting pattern of unknown duration.

I left the doctor’s office. On the stairwell, I felt an initial surge of tears, but they didn’t come through. I thought about crying, but I didn’t feel like doing so. Driving home I was most concerned about my husband, my life partner, my beloved, who would soon be hearing me break this news as gently and reassuringly as possible.

And so, I did my best to do that. I gently told him what I hadn’t yet accepted myself.

At first, he thought I must be joking. But he soon realized I was not. This was not joking material, despite my attempt to do so with the stand-in doctor. After explaining all to my husband Earl to the best of my limited knowledge and ability, he so tenderly said to me, “We’ll get through this together. I love you.”

Please click HERE to find It Is What It Is on Amazon.