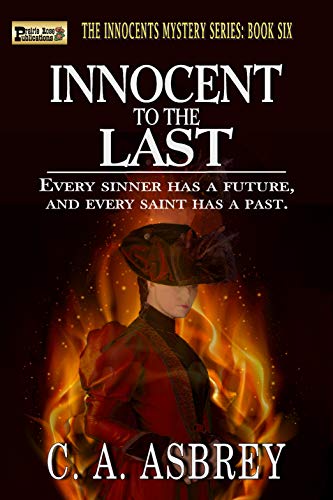 Review: I am amazed by their clever crime solving, their triumphs, near misses, the tightrope they walk between law and outlaw.

Nat, Abigail, and Jake are hot on the trail of the mysterious man behind the scenes who orchestrated the murder of baby Ava. Determined to bring her killer to justice, they are prepared to do whatever they must, no matter where the clues lead. Rebecca, an attractive newspaper woman investigating the same deadly gang of criminals brings complications into the mix for their plans—and for Jake’s heart.

With a slew of hired killers on their tails, the stars align when they bump into Nat and Jake’s old gang, The Innocents, in the midst of a train robbery. They strike a reluctant deal with The Innocents to take refuge in their old hideout at Ghost Canyon—at a price. Abi’s ability to break into a new type of armored car, one containing a rumored “golden boy” statue, gains them their refuge and buys them some very limited time.

When the hired killers show up at Ghost Canyon, there’s hell to pay with the surprise attack Nat has devised. If Jake survives, will he be able to find peace—and love—with his heart’s desire, at last? Can Nat and Abi deliver retribution for the death of their young daughter?

In a story filled with surprise villains, unexpected love, and gut-wrenching action, these twists and turns keep Nat, Abi, and Jake INNOCENT TO THE LAST…

Sampler: Innocent to the Last

Nat’s face dimpled into a grin of delight. “Sheesh. If I didn’t love you enough before, I certainly do now.” He grabbed her by the shoulders and planted a kiss on her lips. “You’re a criminal genius.”

She frowned. “I prefer to think I’m an expert in security matters.”

“Our financial security?” Nat chuckled. He unfolded the canvas wrapped around the drill. “A chest brace? Makes sense. It’ll need pressure. Right. This is gonna take some work, and our arms are gonna get tired. We may need to take it in turns.”

Oso released a long, low whistle. “Where the hell did you find this woman, Nat?”

“What?” Nat turned a glittering smile on his wife. “I didn’t tell him it was yours.”

The sound of metallic grinding gave way to a shunt of dull silence as the drill cut through to the other side. The loose parts inside tinkled and skittered in the space, along with the sound of stone infill, as Jake dragged the drill back out of the hole. Nat gave the door a jostle with his shoulder until it gave slightly, with more bits of metal chinking and falling away internally.

“Gimme that crowbar,” said Nat. “It’s jammed, but thanks to the drill, it’s not in one solid piece. We can dislodge it.”

He inserted it in the tiny gap in the door, which fitted into the wall of the armored car like a plug, heaving at it until it gave. It took two or three jerks until the door finally swung open and the bits of the broken lock scattered on the ground.

“How long did that take?” asked Melvin.

“Almost three hours,” said Jake. “You wouldn’t have enough time to breech this car in an ordinary robbery. You’d never have got in it at all without Abi havin’ the plans and special drills. If this is the future, I’m glad I don’t depend on robbin’ trains for a livin’.”

“I didn’t say I had all the information.” Chuck bristled at Jake. “We’s been listening in to telegrams like you taught us. They said there was a real valuable package on here. We plan to melt it into bars.”

“Well, let’s get in and see what it is, huh?” Nat swung himself inside in one deft move. He pulled the door fully open to let in the daylight.

“Yes, and it opens up like a walk-in pantry with individual lock boxes inside,” said Abigail. “It’s in the drawings.”

The hook-nosed outlaw strode forward. “Shit. We’s gonna be here all day. Why didn’t you find out about all this, Chuck? You’s the leader. You gotta have a plan for this kinda thing.”

“It ain’t my fault, Doc.” Chuck pointed up at the car, scowling like a drunken sailor who’d just been attacked by an angry rat. “How’s I supposed to find out about stuff like this?”

“Look, if you want to follow Nat and this here woman, you go right ahead. I’ll replace you easy.”

Abigail’s eyes widened. “Oh, no you don’t. We’re a married couple, not a gang. Keep us out of this. I’m happy to help you with this car for personal reasons. I have a problem with the man who designed it, not to mention the man who owns the valuables.” She paused. “I’ll help in return for the protection you’ll give us by giving us refuge in Ghost Canyon, but that’s as far as it goes.”

“And who’s gonna treat your wounds if I go?” Doc asked Chuck. “You need me in the gang.”

“You’re a quack,” grumbled Chuck. “I’m better than that, and you know it. This gang needs me more than it needs a leader who don’t plan.”

“Enough!” Jake stepped in between them. “You hit lucky, and got in. We ain’t here to challenge Chuck’s leadership. Nat broke the inside combination before you even finished arguin’. Now, get them spare horses from the cargo car. We can load them up with any boxes we can’t open easy. We can get into them at Ghost Canyon. It’ll save time.”

Chuck nodded and glowered around at his men. “Yeah. What he said.”

“And saddle up four more for us, Melvin. Go fetch Becky, too. I told her to stay put in the passenger car.” Jake climbed into the car. He paused as a thought struck him and turned back to Melvin “Don’t frighten her.”

“Yeah.” Jake delivered a pointed look. “That’s what frightens them. Keep your hands to yourself, and treat her like your own mother.” He hesitated. “No, wait. Treat her like it’s my mother, and remember that I’ll kick your ass if you do anythin’ to upset her. I heard about how you treated your ma.”

Melvin muttered under his breath as he turned to do as he was bid. “That ain’t fair. They never proved nuthin’.”

“Jake—” Nat called from the depths of the car. “Come and see what else I found.”

Please click HERE to find Innocent to the Last on Amazon.