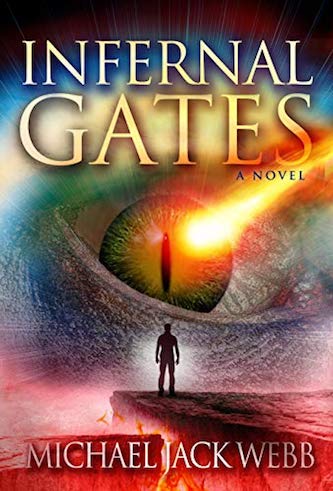 The demon intends to free The Destroyer and his horde of Fallen Angels from The Abyss and unleash a reign of terror and annihilation.

Neither Ethan nor Sam realize an ancient evil, imprisoned since the time of the Pharaohs, has been released by a shadowy group of powerful men and women, direct descendants of ancient Sumerian gods.

The demon intends to free The Destroyer and his horde of Fallen Angels from The Abyss and unleash a reign of terror and annihilation.

Time is running out for humanity as Ethan and Sam are drawn into a conspiracy millennia in the making.

Less than ten minutes before we’re dead, thought Ethan Freeman, and there’s nothing I can do!

The stricken A320 Airbus—originally bound for St. Thomas and now limping back to Charlotte, North Carolina—shuddered like a bird suffering a mortal wound, then shook violently. Shouting and screaming from the rear of the plane drowned out the prayer of the older couple seated in front of them, “Our Father, Who art in Heaven, Hallowed be Thy Name, Thy kingdom come—”

Lisa, Ethan’s wife, sobbed beside him. Across the aisle his eighteen-year-old son, Josh, yelled, “Dad—are we going to crash?”

Megan, his sixteen-year-old daughter, seated next to her brother, screamed, “The engine is on FIRE!”

Lisa clung to the seat arms so hard her fingers turned white and whimpered, “We’re going to die—like Greg,” then moaned, “I don’t want to die—”

Ethan reached for his wife’s hand as a thunderous explosion shook the plane and slammed him against the window, knocking breath out of him. He cried out in agony as a jagged metal clasp sticking up on the armrest between him and Lisa sliced open the palm of his right hand. Blood gushed out of the ugly-looking wound and splattered the back of the seat in front of him.

The plane banked hard to the right and the nose suddenly pointed toward the ground, six miles below, as if the commercial airliner were being plucked from the cloudless, crystal blue heavens by a giant unseen hand. Ethan glanced toward the rear of the plane. A gaping hole replaced the emergency exit. Loose debris disappeared violently out of the plane— and there were two rows of seats missing!

Swinging his gaze back to the First-Class Cabin, Ethan noticed that ice crystals now clung to the windows. His ears popped as oxygen masks dropped from overhead. Shivering, he reached for the oxygen mask dangling in front of him like a puppet on a string and struggled to place it over his mouth and nose. He took several deep breaths, ignoring his bleeding hand, then yelled out to his family, “Put your masks on!”

In the next instant, he was pressed so hard into his seat it seemed as if he weighed four to five times his normal weight. Black spots danced before his eyes and he fought for breath. All he could think about was that he had failed his family—that he couldn’t save them. He cried out in desperation, “GOD HELP US—”

Moments later, a flash of blinding white light enveloped him as a blast of fiery heat washed over him. Then everything went black.

Sam Weaver, lying on a towel in the hot sand, thirty feet from the edge of the blue-green ocean, daydreamed about what it might be like to lead a normal life, when her pager buzzed.

She opened her eyes and fought rising resentment.

It was her first vacation in over eighteen months. Her boss, E. “Mac” Macready—the Chief of the Major Investigations Division of the National Transportation Safety Board, or the AS-10 in Board nomenclature, had promised he’d page her only if it were necessary.

She stared at her bright pink beach bag, one that matched her swimsuit, for several seconds, tempted to ignore the pager. Then she remembered that when she’d signed up to be an investigator for the NTSB, she’d literally signed the rights to her life away. She sat up, brushed several errant strands of thick black hair off her face, and reached inside the bag. Her heart beat rapidly as she read the text: Call Mac at once. Major accident involving Quest Airways A320 your neck of the woods. Go Team notified.

No matter how frustrated she got with the government bureaucracy, her pulse always quickened whenever she received a message like this. Her friends back in DC found her reaction gruesome, but her dad understood. “The thrill of figuring out complex problems others find too challenging, or too painful, is in your blood, Sam,” he’d told her more than once. “You can’t help yourself. You love Gordian knots.”

She found her cell phone. When she reached Mac he said, “Sorry to interrupt your vacation. I know I promised not to call, but this one is big—and bad.”