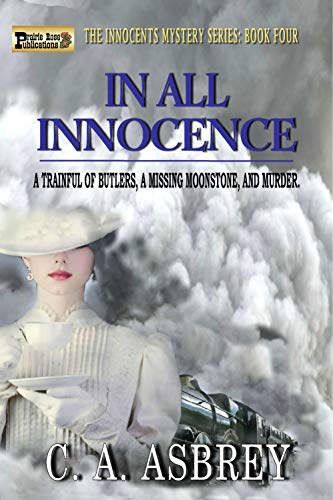 Two murder victims, a large group of English butlers headed west on a train, a nefarious business scheme, a kangaroo, and a cliff-hanger ending. What else could you want?

Nat and Abigail have decided that Canada is their best bet for a clean start with their new baby. It’s the place where American and Scottish accents go relatively unnoticed, and newcomers can get lost in a crowd. The problem is that Canada doesn’t have a transcontinental train, so they have to sneak back into the USA to get to the West coast.

They catch a night train heading over the mountains and are delighted to find it’s one of the new Palace cars, designed to allow people to sleep, and get the remote areas behind weary travelers.

The train is packed full of English butlers heading west to join a new employment agency. They hope to make a fortune providing the New World nouveau riche with the Old World class, which they are desperate to buy for their children.

When the train is stuck in a rockfall, they find that a woman has been attacked in the night, and her moonstone stolen. Our heroes decide it’s best to solve the mystery rather than face too many questions.

They unravel a mystery that has evil tentacles reaching across oceans.

Will they be caught up in them too?

Sampler: In All Innocence

“Nat, take a look at this.” Jake held out a sketch pad.

The dark eyes scanned the parchment before they darted back to his partner. “The whole railway car?”

“Yup. When one of the butlers was sayin’ he was sketchin’ I thought I’d have a look to see if it was any use to us.” He smiled. “I think it is. We can see where people were just before the murder.”

“It sure is. Look at that. Everyone in their place. I guess the ones playing the game with blindfolds moved about, though.” The cheeks dimpled. “And we can see exactly where that was. This is a real good drawing. Who did it?” He scanned the cabin and smiled at the lean man whose receding chin disappeared into his starched collar. “Ah, yes. The one who spoke up.”

Jake held the pad out at arm’s length and turned the page to look at a few unfinished etchings. “He’s talented. He’s caught your lopsided face real well.”

Nat’s mouth firmed into a line. “My face isn’t lopsided.”

“Yeah, it is. It might look fine from your side, but you should see it from here.” Nat turned indignant eyes on the conductor. “Farrow, is my face lopsided?”

The man gave Nat a long, hard stare. “Not lopsided exactly, but one eye’s bigger than the other.” He pointed, staring at the right one. “Well, maybe not bigger. A different shape? It’s got more lines about it. Funny, I never noticed it until you pointed it out. It’s kinda different from one side to the other.”

“No, it’s not.” Nat stabbed a gloved forefinger at the drawing. “I’ve always been told my eyes are my best feature.”

Jake’s guffaw cut through the railway car. “Maybe for their variety?” He glanced between the sketch and his nephew.

“In the drawing, it might be. Not in real life,” said Nat. Jake snapped the pad shut and grinned. “I guess the problem ain’t so much that your eyes don’t match some romantic hero, it’s more that they don’t match each other. It don’t matter none. Abi loves you anyway, and the babe seems to take after her ma.”

The partners watched Farrow’s retreating back as he followed the driver and the fireman down the aisle toward the latrines.

“And you’re so perfect?” Nat demanded. “What about those curls? You look like that boy in the advertisement for tar soap; the one in frilly knickerbockers.”

One slim, fair brow arched in retort. “At least they picked him because he was sweet-lookin’. Not because he’s lopsided. That ain’t gonna sell soap.” Jake paused pensively. “Your face might sell some kinda cure, though.”

“I’m not lopsided.” Nat dropped his voice to a hiss. “My description in the wanted posters said I have even features.”

“Good point.” The blue eyes sparkled with humor. “I guess it was such a good description you were recognized everywhere you went, huh? That’s why you’re in jail right now.”

“I can’t talk to you when you’re like this. It’s like trying to order a cat around.”

“You should be more grateful, Nat. I just got you a picture of where everyone was just before the second murder. Whoever it was would have to try to get past Mrs. Hunter and Philpot in the back row.”

“Yup. I have one more thing to find out. Where did Farrow go?” Nat nodded toward the sketch pad in Jake’s hand. “And take those. We don’t want anyone to have pictures of us.”

“Just take the pad, Jake.” Nat sighed at his uncle’s laughing eyes. “Tell him we need it for evidence.”

Please click HERE to find In All Innocence on Amazon.