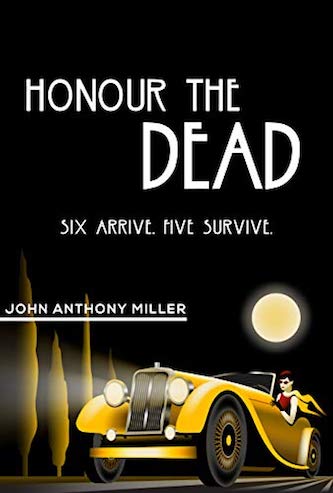 Everyone is a suspect, there are motives to spare – readers will go dizzy trying to solve it…

Six English survivors of the Great War – four men and two women – converge on Lake Como, Italy in 1921. The result: one corpse and one killer…

Psychiatrist Joseph Barnett is treating wealthy socialite Penelope Jones for schizophrenia at a sanitarium in Como. She is convinced someone is trying to kill her.

Penelope is married to war veteran Alexander Cavendish, a hero of the Battle of the Somme. Barnett knows – and hates – Cavendish from the trenches where both were officers during the battle: one was trying to save lives; the other takes them.

Both men had been wounded and treated at a hospital in Amiens where Bartlett met and later married Rose who worked there as a nurse. But why does Rose also harbour an intense animosity towards Cavendish?

The body was found by a fisherman just after dawn, lying face down in shallow water. Fully clothed, a single bullet wound in the back, it had been in the water for several hours.

Police found no obvious clues during the initial stages of the investigation. Authorities have discovered no clear motive, although they believe money may have been involved. Many have theorized that since the body was found a few hundred meters from the asylum, the murder may have been the work of a madman. Authorities vow not to rest until the perpetrator of the crime has been brought to justice.

The corpse was identified as . . .

Two months before the murder

Dr. Joseph Barnett looked through the French doors of his office and studied the last stubborn remnants of snow clinging to the mountaintops. Flowers had begun to sprout, offering the promise of spring, and weak rays of sunlight bathed the lake that sprawled beyond the grounds of the sanitarium, reflecting off the water so it shimmered like glass. He often admired the breathtaking view, collecting his thoughts, immersed in tranquility, absorbed in the peace that nature provided. And then, for reasons unknown, other than fate, other than the random seconds in our lives that place two people in the same place and time, that serenity was shattered.

Penelope Jones came to the sanitarium shortly after her first suicide attempt. Her husband had found her sprawled on the floor of a Monte Carlo hotel room with her eyes closed and face gray, an empty bottle of barbitone on the bureau beside her bed. Doctors saved her life − initial reports claimed a miracle − and she was released from the hospital a few days later. Authorities cabled the sanitarium shortly thereafter, providing notification of her impending arrival.

She came from a long line of wealthy socialites, her name and face recognized easily by most of the civilized world – as the privileged so often are. From England’s little princess, a precious child with a smile that lit the heavens, she had become a desperate, haunted shadow, her eyes showing muted pain hidden in her soul. After the Great War ended, she moved continually − Paris, London and Monte Carlo, as if constant change would keep the demons from finding her.

She avoided publicity, but a world starved for stories after the most hellish conflict in human history proved that celebrities sold newspapers and magazines. They provided readers with an escape, insight into a fairy tale existence, a world imagined and longed for, envied but misunderstood. When splashed against the backdrop of the Jazz Age, famous people often became infamous, whether they deserved it or not.

Penelope, or Miss Penelope as she was called even after her marriage, was admired by many because she had everything they wanted: a huge estate staffed with devoted servants, an education only the finest schools could offer, the love of the world’s most desirable man. And even though she had every reason to love life, she despised it.

Her ancestors had been at the forefront of British affairs for several centuries, revered by most of the Empire’s subjects, but the current generation was cursed by tragedy. Penelope’s mother was killed in a train accident when she was a child and her brother died in the closing days of the war. He was a pilot, known for his aggressive attacks, accomplished, with many kills. He would have become an executive of the family’s global business empire, had his life not ended before it began. He was their future, the best they could offer a healing world, stolen just as he stepped upon the world’s stage. Penelope never dealt with his death and it may have spawned the steep decline that led her to the asylum.

Her husband, Alexander Cavendish, was also blessed with a long line of titled ancestors. The world’s most eligible bachelor, he was blond with blue eyes, an impish grin, and seemed to have all the qualities women wanted: handsome, intelligent, articulate, charitable. He proposed to Penelope after a year-long courtship and then rushed off to France to fight, their love story plastered on many front pages. He survived the Great War when so many more had not, a captain in the British Expeditionary Force, a celebrated war hero for his bravery in the Battle of the Somme.

Please click HERE to find Honour the Dead on Amazon.