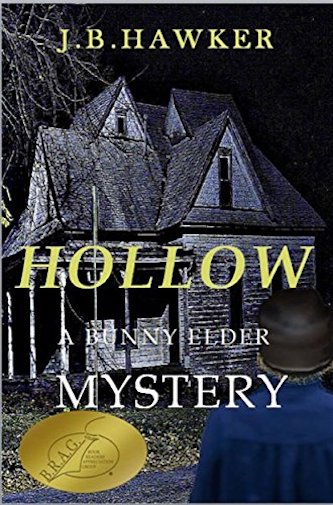 What took Bunny back to her own school days, most of all, was the crisp night air, so charged with teenage hormones it tingled on her skin like electricity. Read an excerpt from Hollow, A Bunny Elder Mystery.

Newly-widowed Bunny Elder draws solace from the fall season as she recovers from the shock of her pastor husband’s accidental death.

With a new home, new job and renewed relationships, she is groping her way to stability, only to be taken off the healing path by the dead bodies and body parts thrust in her way by a serial killer who uses the small mountain community’s Halloween decorations to display his victims.

Will Bunny be able to cope, when this madman sets his sights on her?

This book, a BRAG Medallion award winner, the first in the mystery series, introduces the intrepid, late-blooming Bunny Elder.

Bunny is a Christian, but she’s not perfect. She struggles with temptation and sometimes fails, as real-life Christians sometimes do.

But please don’t be too hard on her, as she picks herself up and keeps trying.

When Max Banks turned off the highway at the south end of town and approached Main Street, he met with a roadblock and detour signs.

He began to swear, and then stopped when he heard shouts, car horns and snatches of music coming from behind the barrier.

“The Homecoming parade! I forgot. Oh man, it’s so lucky I didn’t miss it.”

Banks quickly parked the car, grabbed his camera from the storage compartment and ran toward all the commotion. Tonight was the high school’s homecoming football game, one of the biggest events of the year in Clark’s Hallow. The Clarion-Review would cover the game and parade with a special pictorial section. If Max had not returned in time, it would have been a disaster for the paper. He had already sold the advertising for the edition.

“That waitress was sweet, but she wasn’t worth missing Homecoming. What was I thinking?”

As Max wandered along the parade route, snapping photos of the convertibles packed with cheerleaders and pickup truckloads of football players shouting and waving to their friends and relatives, he thought about the night before. It had been all too easy to maneuver the barmaid into inviting him home with her. Maybe the lack of a challenge was the reason the night had seemed so flat. She had a young, supple body that performed with enthusiasm and skill. As a cardio workout, the night had been a great success.

In the morning, waking in the rumpled bed with the woman’s arm flung across his chest, he was surprised by flash of revulsion. He’d slipped out of bed and left without waking the woman. Instead of satisfaction at having scored, he felt empty and sad. The unfamiliar feeling clung to him.

The pep band, playing “Louie, Louie” very loudly and off-key, rode by on a flatbed semi. Max got a few good shots of them and then walked back to his car. He would get the rest of the copy he needed that night at the game.

It was lucky Max left their complimentary press passes on his desk when he disappeared. The paper could not afford to neglect coverage of this game and the special half-time show.

While Bunny worked for the Clarion-Review, she would strive for its success. She couldn’t do much about photographs, but she could get interviews and colorful copy. Not knowing where Max was, it was the best she could do.

Stepping onto the dusty track, Bunny relished the familiar atmosphere. High school nighttime football games are uniquely American. In the thirty years since she’d last approached these bleachers, it seemed nothing had changed. The sounds of friends shouting greetings, the marching band tuning up and the piping voices of excited children running on the sidelines were as they had always been. Even the rich aroma of hot dogs and popcorn from the snack shack mingling with fresh-cut grass and sweaty sports equipment was familiar. What took Bunny back to her own school days, most of all, was the crisp night air, so charged with teenage hormones it tingled on her skin like electricity. If only more people knew about these Friday night fountains of youth thriving in small communities every fall, the bleacher seats would be the hottest tickets around.

Standing under the velvety black sky, Bunny felt sixteen years old and thought most of the adults attending shared her feelings.

Bunny chatted with people in the crowd, taking a few notes, then found a seat high up in the stands, just in front of the announcer’s booth. From here, she could see everything, as well as have a much-appreciated backrest. She might be feeling like a teenager in her heart, but her body would never endure being perched on a splintery wooden bench for three hours or more. With that in mind, she had brought a nice thick quilt to sit on.

Bunny, a high school cheerleader of old, looked down at the track to see the current squad scatter and coalesce in various combinations, as they self-importantly planned their evening’s performance. Each of these girls knew in her heart that the football game existed merely as a backdrop for her own good looks and enthusiasm. Bunny had been the same at that age and felt a bubble of joy rise inside her to see how much some things never change. 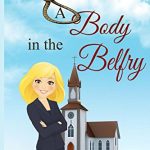